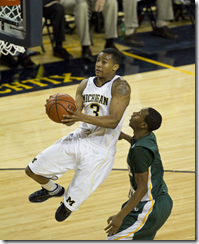 John Beilein might run a two guard offense originally designed to minimize the importance of a point guard but last season showed what a luxury a great point guard can be to any team. Darius Morris was the sort of guard that could make something out of nothing, manufacture a basket and made all of his teammates better.

Trey Burke’s career trajectory was accelerated in June when Darius Morris opted to keep his name in the NBA Draft. Now, the 5-foot-11, 180 pound guard is the only natural point guard on the Michigan roster and will be thrust into the limelight from day one. While he certainly would have enjoyed playing with Morris, I don’t think there’s any question that Burke is relishing the opportunity to fight for a starting position this season. Here’s a look at some of the major reasons why Burke could excel and conversely why he might struggle as a freshman.

There’s no denying how important of a role Burke will play on this year’s team. He’s not starting right now but I would be shocked if he doesn’t step into the starting line up before the end of November. The road won’t be easy, and there will almost certainly be road blocks along the way, but Burke seems well prepared.

We’ve yet to see Burke face adversity at the college level but his make up at the prep level was impressive. He’s won a lot of games over the course of his career. He’s led (as a senior) or played complementary roles (alongside Jared Sullinger). He’s humble but confident and, if his summer workout videos are any indication, a hard worker to boot.

He’s also a freshman point guard. We’ve examined freshmen point guards in the past and Darius Morris’s disappointing freshman season and brilliant sophomore campaign prove just how difficult playing the point guard position as a freshman can be. We’ll learn just what Burke is ready for sooner than later when the Wolverines travel to Maui. He’ll face a talented but inconsistent Joe Jackson in game one and, if Michigan wins, could face off against mega-recruit Austin Rivers in game two.

Bottom Line: Averages hovering around 10 points and four assists per game seem attainable. Burke is a natural scoring option and will look to create, likely using at least 20 percent of Michigan’s possessions. The tempo-free perfectionist in me will consistently complain against his turnover rate which hovers around 20 percent, not a bad figure but one that stands out on a Michigan team that rarely turns the ball over.