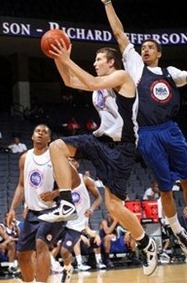 The early signing period for the 2012 recruiting class begins today and all three of Michigan’s commitments are expected to sign their letters of intent this week. As reported yesterday, Mitch McGary and Glenn Robinson III plan to sign their letters of intent on today while Nick Stauskas will sign his letter on Friday during a ceremony at his school.

For casual recruiting followers or savvy fans that want to relivethe past, we put together signing day capsules – with basic information and a run-down of all our previous scouting reports, videos and interviews – for all three of Michigan’s 2012 commitments. You can find the capsules after the jump.

Mitch McGary
Big, 6-10, 250-pounds, Brewster Academy (NH)
Plans to Sign: Wednesday (9 A.M.)
ESPN: 5-star (2); Rivals: 5-star (3); Scout: 5-star (2)
Expert opinion: “It is difficult to find players who bring all-out effort and energy on a consistent basis, but McGary does it better than anyone. Not only does he bring energy to his own game, he gives it to his teammates. His motor never stops as he constantly works the backboard, runs the floor and dives on the floor for loose balls” – Paul Biancardi

Glenn Robinson III
Wing, 6-foot-6, 195 lbs
Plans to Sign: Wednesday, ~6 p.m. ET
ESPN: 4-star (52); Rivals: 4-star (34); Scout: 4-star (38)
Expert opinion: “Blessed with basketball genes, Robinson is an explosive athlete with length. He’s able to get to the rim with ease and can over bigger defenders in the paint.  He’s a great rebounder from the wing, and uses his length and athleticism to be effective on the glass. With his length and quickness he has the potential to be a great defender on the wing.” –Joe Eberhardt/Indy HS Hoops

Nick Stauskas
Wing, 6-foot-6, 205 lbs
Plans to Sign: Friday
ESPN: 4-star (83); Rivals: 4-star (79); Scout: 3-star
Expert opinion: “A knock down shot maker with good size and toughness for the two-guard spot, Stauskas needs to dedicate himself to maximizing his physical potential with only limited amounts of athleticism and quickness to begin with.” – ESPN