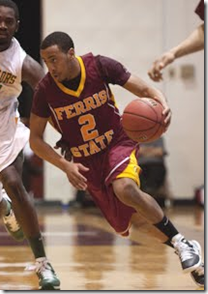 Michigan hosts its second GLIAC opponent in seven days but this one counts in the record books. Ferris State took Indiana to overtime at Assembly Hall last season and finished first in the GLAIC North and advanced to the Division II Sweet 16. However, this year’s Bulldog squad is almost certainly a cut below last year’s with significant departures across the board.

Ferris was already blown out, 85-58, at the Breslin Center and lost at Division III Calvin College in exhibition games this season. The Bulldogs lost four starters from a year ago and return only one player that averaged more than six points per game . It’s safe to say that this year is a rebuilding year in Big Rapids.

Ferris State was picked third in the GLIAC North and will rely on 6-foot-6 senior wing Jerrell Sanders to provide the bulk of the offensive production.  Junior guards Kenny Brown and  Daniel Sutherlin have also proven to be integral parts of the Bulldog offense. Ferris hasn’t shot the ball well in early exhibition games, making under 30 percent of its threes versus Michigan State and Calvin, and has also been dominated on the glass. Michigan State rebounded an astounding 55 percent of their misses.

It’s clear that, at this point, Ferris State isn’t a great team. That doesn’t really matter if Michigan plays in a similar fashion to last week’s exhibition game. That performance was underwhelming in almost every area. Michigan shot the ball terribly, was outrebounded and looked generally lethargic in a 47-39 win.

As painful as that performance was, it’s probably one of the most useful coaching tools available at this point in the season. As positive as Bacari Alexander can be, you can bet that he dished out a few reminders in practice that Michigan was outrebounded and only scored 47 points against Wayne State. Subtle encouragement.

It will be a new starting lineup for Michigan as freshman point guard Trey Burke has earned the start in his first official college game. This should come as no surprise, Burke is a point guard at heart and Douglass is not. Whether or not Burke is one of Michigan’s top five players (he very well may be), he needs to start because he is the only true point guard on the Wolverine roster.

Zack Novak, Tim Hardaway Jr. and Evan Smotrycz all remain in the lineup as well as the other notable, Jon Horford. Horford’s slot in the starting lineup comes as a surprise because Morgan was a significantly better player a year ago, starting all but one game. Both players had forgettable exhibition performances but they’ll certainly be the primary position battle to watch this evening.