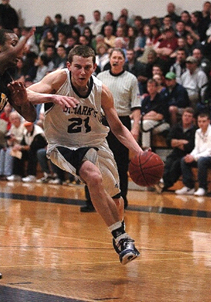 Michigan announced its third confirmed letter of intent this morning as 2012 shooting guard Nick Stauskas made things official. Stauskas signed his letter last night and is the third and final prospect that Michigan plans to sign in the early signing period. Here’s Beilein on Stauskas:

“Nik is an outstanding three-point shooter who becomes a playmaker with the ball off the bounce,” said Beilein. “He possesses tremendous ball handling skills and outstanding court vision which allow him to be an exceptional passer. Nik loves the gym and works tirelessly to expand his skill set. We welcome him to The University of Michigan with great anticipation.”