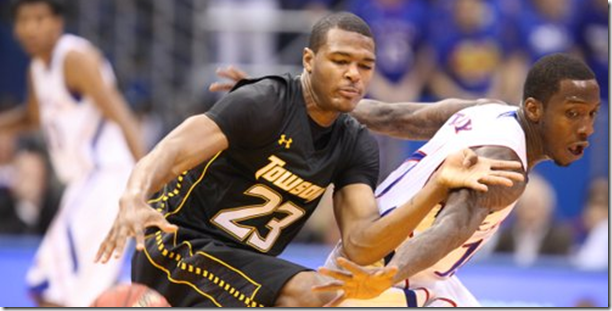 It’s going to be a long first season for new Towson head coach Pat Skerry. The Tigers went winless in conference games last season, lost 80% of their per minute production and return just one letter winner and zero starters from a season ago. Ken Pomeroy’s robots only give Towson a greater than 50 percent chance of winning one game this season. Early returns aren’t great either as Kansas beat the Tigers emphatically, 100-54, in its season opener on Friday.

The Colonial League contains some of the nation’s favorite Cinderellas with schools like VCU and George Mason making Final Four runs but Towson continues to lag behind the rest of the conference. Last season’s struggles began on the defensive side of the ball where the Tigers surrendered a whopping 1.20 points per possession in CAA games. Ken Pomeroy’s preseason ratings actually have Towson projected as the worst defense in the country. 345th out of 345 teams. If there’s ever a game for Michigan to rediscover an offensive identity, this would be the one.

Towson’s offense was plagued by turnovers in its season opening loss at Kansas as the Tigers coughed the ball up on a whopping 34% of their possessions. Shooting just 36% on twos and 33% on threes, the game probably would have been even uglier if Towson didn’t grab 43% of its missed shots. The key to the game defensively for Michigan will be limiting second chance points and controlling the defensive glass.

Ken Pomeroy’s early numbers predict an 80-54 Michigan win in a 62 possession game, giving U-M a 98  percent chance of victory. This game appears to be the perfect opportunity for the Wolverine offense to shake off some of the rust. Beyond offensive cohesion, the biggest test for Michigan is likely to be on the defensive glass. Towson more than held its own on the glass against Kansas and should be able to provide Michigan’s front court with a legitimate challenge.

This & That: An inside look with pre and post game footage from the locker room from Friday’s game at JohnBeilein.com. Towson is 0-4 all-time versus Michigan but two of those losses were by three points or less. Tim McCormick will be in the broadcast booth for the ESPN3.com telecast, a non-subscription online stream is one step closer to live broadcast television. Nick Baumgardner outlines four things to watch. Ferris State highlights.

Let’s hear your thoughts and predictions on tonight’s game in the comments below.