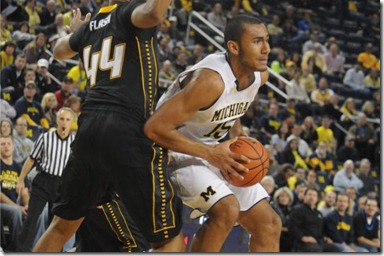 It’s crazy that another amazing year of college basketball is upon us. I’m greatly excited to once again be calling games for Michigan Basketball, and even more enthused to be working with Dylan to bring you guys exclusive behind the scenes action. We’ve got some wonderful things planned and I hope you will enjoy them. I’m also giving away two free pairs of tickets to Thursday’s game versus Western Illinois to two random people that Like UM Hoops on Facebook and comment on the contest thread.

Let’s get right into your questions from this week’s Mailbag:

What do you think of Michigan’s bigs thus far? Where can they show improvement but also what are some positives that they are bringing to the table?

I think the Michigan bigs are going to need time. That’s the first thing I would stress. We all know how much Darius Morris meant to this team, accounting for over 50 percent of the offense last season. Especially considering our offensive system isn’t one where the bigs get touches every time down the floor, they will need time. I think the offensive production will improve as they get used to playing with a new distributor and get their feet up under them.

With that being said, I think the focus for the bigs at this point needs to be one of relentless pursuit. Hitting the glass, getting loose balls, taking charges, scoring off dump downs and put backs. I think Jordan Morgan and Jon Horford both have the attitude and the ability to be very mean on the glass. We started to see some of that vs. Towson and hopefully that trend will continue.

I’ll say one thing though, I’m loving what I’m seeing out of Evan Smotrycz. If he takes on this supporting role to Zack Novak’s feistiness and grit, this team will be a lot better. Right now, he’s diving for loose balls, taking charges, and mixing it up in there. I’m looking forward to seeing how this attitude progresses during the season.

David, can you talk about how John Beilein supports his former players? Has he supported you directly/indirectly with IMU or with your radio job? What can Zack and Stu expect after this season from Coach Beilein?

John Beilein provides great support for former players. Coach Beilein and I continue to talk and strengthen our relationship to this day. He knows if he needs anything from me, I’m there. And it’s been replicated on the other end as well. He even appeared in IMU’s brand video when we launched in September of 2009. I think Zack and Stu can look forward to having his consistent support after this season. I don’t just consider him my former coach, I consider John Beilein a friend.

What do you see out of Trey Burke thus far? How comfortable does he look in the offense, especially half court? And where does he need to improve? – Jon

Okay. I don’t want to put too much pressure on this young kid. But I’m going to put on a little bit. Now, Michigan hasn’t played anyone. That’s a fact. However, this guy appears to possess all the skills and intangibles to be a dynamite point guard in the Big Ten. What impresses me most? His IQ. Take for instance the Towson game, where Towson on several occasions switched their defense from zone to man-to man on the same possession. Every single time, Trey Burke was able to recognize this and call the offensive play accordingly. That is extremely impressive for a freshman point guard starting in his first game.

I’m looking forward to seeing him match up against Joe Jackson from Memphis. It will be a very good test for Trey.

I think one of the hardest things to pick up as a Freshman in general are defensive concepts and executions. You don’t really learn how to play real defense in High School. So when you get to college and Coach Beilein is talking about “hot mans,” “fires,” and all that, your mind starts to spin. So a freshman point guard has to hold his own on that end. It doesn’t really matter what you’re doing on offense, if you’re a liability on defense and you can’t be trusted to execute your assignments, you’re going to be on the bench.

How does preparation differ for a tournament with 3 games in 3 days like Maui compared to a normal game week? – Anonymous

With very quick turnarounds like this, you pretty much have to prepare for 2 teams at once. So I’m sure Coach Beilein will start to go over small bits of Duke and Tennessee at the same time that the team is preparing for Memphis. You can also forget about shoot-arounds before the game. You pretty much rely and focus in on walk-throughs in the hotel. The players have to be extremely attentive in tournaments so that they can quickly pick up the information and game plans. Also, the coaches get absolutely no rest. That’s why they make the big bucks

Thanks guys! Stay tuned for more throughout the year. Oh, and if you haven’t checked out my new blog – Goodness Determined – what have you been waiting on? :) Content is updated every day and you can follow the blog to learn about what’s coming next for IMU.