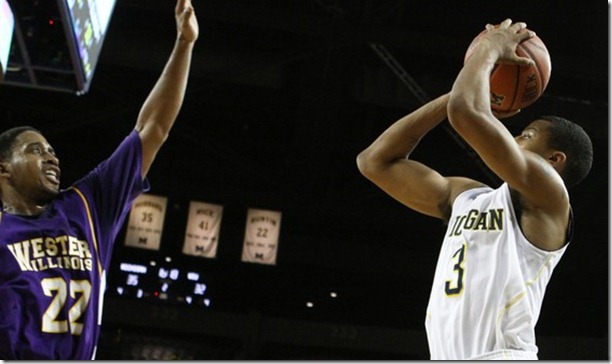 Three games, three wins and three relatively unsatisfying performances. Michigan handled its business during the first two weeks of the season but, as they prepare to board a flight to Maui on Friday, it’s clear that the Wolverines haven’t found their stride. Tonight, Michigan beat Western Illinois 59-55 in a dragging 55 possession affair.

There were some pretty dramatic statistical anomalies in this game but the deciding statistic was Western Illinois’ tendency to turn the ball over. The Leathernecks coughed it up 20 times, or on 35% of their possessions, and actually had as many made field goals as turnovers. 24 of Michigan’s 59 points were generated from turnovers although Michigan notched just two points in transition. Western Illinois was able to hang around in the game despite its turnover woes because of some very efficient shooting – 52% on twos, 44% on threes for an impressive 57 eFG%. The Leathernecks also rebounded the ball well on the offensive glass, corralling 39% of their missed shots for 10 second chance points. There’s little doubt that Ceola Clark transformed the Leatherneck offense as he scored 21 points on 6 of 12 (4-9 3pt) shooting and handed out four assists in his first game in almost a year.

It’s the last thing you expect to hear in a game where Michigan failed to score 60 points but this was Michigan’s most efficient offensive performance of the season. That says quite a bit about Michigan’s early offensive struggles as well as the slow tempo of this game. The Wolverines scored 1.06 points per trip, far from great but an improvement over 1.01 and .95 in their first two games of the season. Michigan shot the ball better – 55% on twos, 35% on threes for 54 eFG% – and got to the line more often than it has in any game this season. That performance still just netted 1.06 points per trip, an underwhelming number versus the worst defense in the Summit League a season ago.

A couple quick team wide Michigan thoughts. Western Illinois was trying to slow the game down but two fast break points on the game shows that Michigan will be more than content to slow games down this season. Free throw shooting is officially worrisome as Michigan made just 14 of 22 attempts (64%) rendering their ability to get to the line less valuable. We only saw one or two possessions of the 1-3-1 zone but I suspect we could see many as 10 possessions on Monday. I thought Michigan ran more effective out of bounds plays today than we’ve seen in recent seasons, Stu Douglass had an easy look and Morgan got a layup off a slower developing set play off an inbound. Those types of easy baskets can be valuable if Michigan continues to sputter offensively.

The question that everyone wants answered: “Is it time to Panic?” Frankly I’m not sure. The Michigan offense hasn’t looked good, failing to clear 1.10 points per trip in four games (including exhibition), and the defense has been far from faultless. Memphis played just one game and looked nearly perfect offensively against a better team (Belmont) than Michigan has faced to date. Concerns about Michigan’s slow start are real but it’s tough to jump to conclusions or reach judgment based on games against teams that simply weren’t that great. What happens on Monday, when the Wolverines face a top 10 Memphis team, will teach a lot about this team and very quickly. One thing is certain, if Michigan plays with the same sort of lackadaisical intensity and execution that we’ve seen thus far, it will be a long flight back to the mainland on Wednesday.

With respect to facing Memphis, I’m more worried about Michigan’s defense than its offense in that game. Monday’s game will be much more about controlling tempo and preventing the Tigers from getting easy looks of the sort that Western Illinois had all night. While playing in a close game might be a nice warm-up, a 55 possession game is definitely not be the most relevant tune up before facing a Memphis squad that averaged 69 possessions per game a season ago.