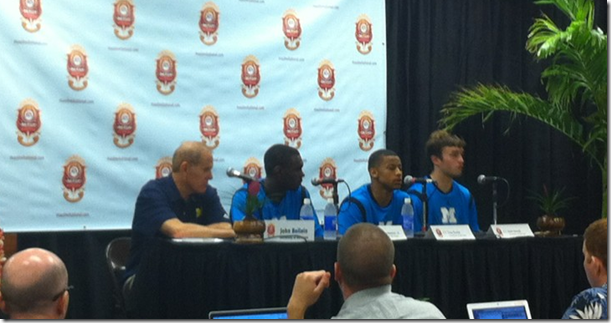 John Beilein, Zack Novak, Trey Burke and Tim Hardaway Jr. took to the podium after Michigan’s 73-61 over Memphis to breakdown the game for the media. Here’s the full transcript of the post game press conference.

COACH BEILEIN: We’re really pleased we could come away with a win today. Memphis presents some very big challenges. They’re a very good defense. We haven’t seen anything like that. Our scout team does not show us ‑‑ they work really hard, but they can’t to duplicate what you see. So we had some sloppy moments and we had some really good moments as well.

Q. If you could talk about the way the first half ended on that 10‑0 run and the incident that happened there at halftime? Did that change your mentality or your outlook going into halftime or that kind of spurt that helped you in the second half?

ZACK NOVAK: Yeah, I think that we switched it out of zone, and we got a little sloppy offensively, started rushing some things. And really we didn’t want to get the score up 100‑90, which was the way it was going for a little bit.

We hit some toughs in the beginning ‑‑ some tough shots in the beginning, but you can’t keep that going all game. They made a little run there where our tough shots stopped falling, and we got it together, got back with it. Slowed down, and had good shots, played hard basketball. They switched that zone, and we got some shots. I think the biggest thing we did was rebound. We had the lead going in the half.

Q. Tim or Trey, I think those Memphis guards thought they were going to be the ones attacking in this game, and it was you two that continued to attack. Can you talk about the mindset? You got easy buckets. Talk about attacking them?

TIM HARDAWAY, JR.: I think it was just preparation. We were talking to our coaches and finding an easy way to score on offense. We took advantage of it and it helped us out in the long run.

TREY BURKE: The goal was to stay poised out there on the court. We knew they were going to bring up their hardest punch, and we knew they had quick guards. Joe Jackson’s a really good player. So before the game, the game plan was basically for us as ball handlers to stay poised out there to keep the team under control, and we did a good job of that.

ZACK NOVAK: I think we just made hits. Saw the guy and blocked out. I mean, really rebounding just comes down to effort I think a lot of times. So we really knew that they were going to fly at the glass. That’s how they scored a lot of points in the tapes that we saw. So we figured if we could keep them off the glass and not give them second chances, our chances to win will go way up.

Q. Trey, for the first time, the offense really flowed through you. You looked really comfortable out there. Can you talk about your play?

TREY BURKE: Yeah, like I said, it was just poise. I made sure of that. I made sure I stayed under control. Like I said, with Joe Jackson pressuring me full court, I basically just had to take my time and get the offense into what we were running. We did a good job with executing on offense and crashing the board. Basically, our coaches did a great job pregame. Basically just telling us what their tendencies were on defense, and we executed well.

Q. You’ve been through so many of these high‑pressured games against quality teams. To win one like this without shooting the three ball really well, does that say something about the team’s evolution and momentum?

ZACK NOVAK: Yeah, I think so. A lot of the big wins we really shot the lights out today we shot well, but it was not like it was a three‑point barrage or anything. We’ve got players that worked really hard. We were a good three‑point shooting team. You’ve seen it so far this season for us that we haven’t shot the ball well but we’re still winning. That’s just going to help us down the road.

Q. Can you talk about just the contributions you got from a lot of your reserve players, your role players? That three‑pointer from Eso was huge at the time. You said you wanted to play a few more guys. You got contributions from guys, not just minutes but rebounds, points contributions.

COACH BEILEIN: We’re going to be here for three days win or lose. So I wanted to make sure we gave a little more rest than we had been giving. Really, we stopped and embraced the moment. When Eso hit that shot, that young man has worked his tail off so hard all summer long. He’s just worked hard.

Rather than go right in the huddle, I told the assistant coaches let’s think about what happened. That young man has worked so hard, and now on a national stage he makes that jumpshot. Then we went back in the huddle.

You could see the team’s reaction. How much everybody likes him. But if you look at our points off the bench, which had not been really good going into this game, it was really helpful for these guys to get a little bit of rest.

Q. For the players, can you talk about what you did defensively? You were able to clamp down in the second half and take away their transition game?

TIM HARDAWAY, JR.: We just made sure once the shot was going up, they like to run in transition. So we made sure we had guys back there and just communicating out there. I think that was one of the key things we did is communicate really well to stop the ball coming down the fast break, and just pointing out to your man who you got, and I think communication is the whole key to having a successful defensive team on transition.

Q. Can you talk about trying to juggle the front court with all the fouls. Horford played maybe the best game he’s ever played for you guys?

COACH BEILEIN: He sure did. Jordan was in foul trouble early. I don’t think he was pleased with himself trying to go for that block with one foul. Just let him score the basket. I liked his desire there, but all of a sudden he’s in foul trouble again and in the second half.

So we’re in place right now where hopefully we’re versatile enough there to play Evan, play Blake. We played all four guys at the five‑man today and it gave us good versatility.

TREY BURKE: I didn’t think it was like a me versus him challenge. I knew that he was good. I played against him back in high school. I knew that he was really quick. I just made sure that whenever he pressured me full court, like coach said, did the math. I basically beat him and getting my other teammates involved.

Pretty much it was just like I was ‑‑ it wasn’t like I was going against him, it’s a one‑on‑one thing. I’m just glad we got the win.

Q. Zack, you talked about how losing stings a lot with you. There is a chance for a match‑up with Duke tomorrow. Can you talk about your reactions from last year, and how that could go into the game tomorrow with them?

ZACK NOVAK: Right now there are two teams out there playing that we could play. One thing I can tell you is whoever does end up winning this game, we’re going to be just as ready to play either one of them.

You’re at the Maui Invitational. You don’t need any extra motivation to get up for a game. Whoever wins, whoever is on the schedule tomorrow, we’ll be ready to go.

TIM HARDAWAY JR: It was just going in there and sticking with the game plan. I know we had mismatches out there, and they were really overplaying us. So we were just trying to stay smart and play hard at the same time.

They were playing really up on us, so we just used that to our advantage for backdoor cuts. If the big is on a small, try to post them up, try to take them out. So we were just trying to play the game, really.

Q. Could you talk a little about Tim’s growth from last year and what you really want to get out of him overall this season?

COACH BEILEIN: He wants to really be a player. His focus is on his own improvement. So he’s changed. His body has gained weight, and he continues to work on his game so he can play more off the bounce.

He’s not just a shooter, but he can really shoot. Sometimes those guys rely on that only. So he’s really tried to diversify his game more. He’s had seven rebounds today. That doesn’t happen very much. He’s trying to do more by maybe even doing less sometimes.