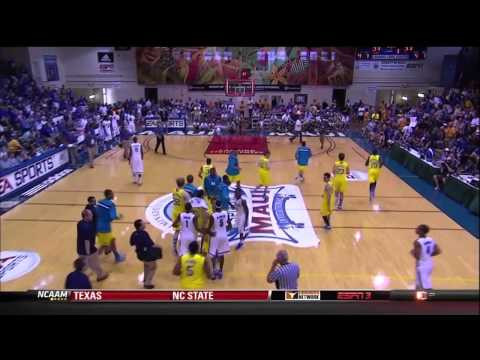 1. Trey Burke’s block to end the first half

With Michigan on a 10-0 run, Memphis was in serious need of a bucket before the end of the half. With 25 seconds remaining, Memphis is content to let the clock wind down all the way to four seconds. But for Michigan, the most important moment of this play came with 11 seconds to go. As Wesley Witherspoon prepares to screen Douglass, who’s guarding Joe Jackson with the ball, Trey Burke alerts Evan Smotrycz to switch. Because of this heads up play, when Witherspoon does set the pick Burke is able to switch onto Jackson rather than Smotrycz. You can bet John Beilein knew this, and that’s exactly the way he had told Michigan to play the high ball screen in practice and in the huddle (he also points the switch out during the play). Now, after the screen, Burke quickly picks up Jackson with time winding down and finishes the play with a beautiful block to end the second half and preserve Michigan’s momentum.

Things got a little testy after the play as well when Zack Novak confronts Will Barton after Barton shoves Evan Smtorycz in the back. Novak and Barton received technical fouls and although Novak eventually fouled out it’s no surprise and tough to complain with the three time Michigan captain showing a little emotion in backing up his teammate.

Coming into this game, John Beilein knew Memphis was fast. He knew of the pace they’d want to play and that at times, Michigan would have to run with them. He also knew that the Wolverines have to play three games in three days. When you run with Memphis, chances are you’re going to get tired. Beilein vowed to play his bench and did, playing 11 players — 10 of which scored. The bench combined to score 19 points and three of those points came from junior preferred walk-on Eso Akunne. Eso hit this huge three to ignite the crowd and give Michigan a 12 point lead with just over 12 minutes to play. It was a big play for Michigan but especially Akunne, who has slowly earned more playing time and appears to have jumped Carlton Brundidge on the depth chart. John Beilein specifically pointed out Eso’s shot and hard work after the game:

We stopped and embraced the moment for a minute when Eso hit that shot. That young man has worked his tail off so hard, all summer long. He’s just worked hard. Rather than go right in the huddle, I told the assistant coaches, ‘let’s just think about what just happened.’

Plays like this and solid production from Colton Christian, Jon Horford and even Blake McLimans are the sort of plays you need during a three day tournament. The bench gave Michigan a lift today and is almost certain to be counted upon during the next two games as Michigan’s legs tire.

I’m still not exactly sure how this happened, but somehow it ended up as two points for Michigan. If Eso Akunne hitting a big three wasn’t a sign that this was Michigan’s night, this bucket certainly was. Trey Burke blows by one Memphis defender and uses a beautiful spin move to get by another but he’s clearly out of control and over penetrates. A Tiger defender reaches in from behind and knocks the ball out of his hands, through the legs of another defender and directly into Tim Hardaway Jr.’s hands. Hardaway scoops it up for the easy basket, two of his 21 points on the day.

Overall, Burke did a great job of controlling the game and playing under control but there’s a fine line between playing in control and doing too much. This is one of those instances where Burke over penetrated but was bailed out by a bit of fate.

Toward the end of the second half, the Memphis full court press was furious at times. Michigan struggled to get the ball over half court and had to call a couple timeouts because of it. But here, with five minutes left and Memphis threatening down nine, Trey Burke takes matters into his own hands. He blows past Joe Jackson and every other Memphis defender in about seven seconds, taking the ball coast-to-coast for an easy two. With Darius Morris gone, Burke is one of the few players with the quickness and dribbling ability to break opposing presses and make plays on his own. While Burke got into trouble in the play before by over penetrating, he makes a great read on this play realizing that he can get all the way to the basket for an easy lay up.

5. Evan Smotrycz’s 3-pointer all but seals the game for Michigan

Memphis did a great job attempting to fight and claw its way back into the game but this shot from Evan Smotrycz was the dagger. Michigan does a great job of running down the shot clock and still managing to get a quality look. Stu Douglass dribbles probingly across the court to the wing, eventually weaving his way into the paint, drawing the attention of two additional Memphis defenders and finding Smotrycz open for a triple. Smotrycz doesn’t hesitate and calmly drains his only three of the game, giving Michigan a 70-56 advantage with just over three minutes remaining, effectively eliminating any chance of a Memphis comeback.