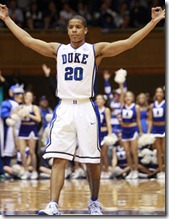 It’s easy to dismiss the desolate Michigan locker room after a 73-71 loss to Duke last March as a distant memory. After all, It’s a new season and both rosters look different, but 12 of the 16 names on the current Michigan roster sat in that locker room eight months ago. As far as basketball memories go, those wounds are still fresh. Duke ended Michigan’s season in a game that Wolverine players thought they had every right to win. They might not have said it publicly but this is exactly the game Michigan players hoped for when they traveled to Maui. Gradually, Michigan-Duke is beginning to feel like a rivalry again.

The two teams split a pair of games in 2009 and played one of the more entertaining games of the 2011 NCAA Tournament, a two point Duke win. Jalen Rose stoked the fire as his documentary provided the sort of inflammatory fodder that can boost any rivalry, and now Michigan and Duke are set to face off again in the Maui Invitational semifinals.

Unlike Memphis, Duke has already played plenty of basketball this season and there’s a decent sample size of statistics available to analyze. The Blue Devils have already beaten four KenPom top 100 teams in Belmont, Michigan State, Davidson and Tennessee.

Everyone is quick to point out that this isn’t a “vintage Duke team” because the Blue Devils lost their top three offensive weapons from a season ago in Nolan Smith, Kyle Singler and Kyrie Irving. Duke might lack any feared playmakers of the past but the Duke offense has been plenty efficient in its own right. Duke attempts just 33% of its shots from beyond the arc but has been lethally efficient, connecting on 45% of its three point attempts. That lethal three point shooting has been complemented by a gaudy number of free throw attempts with a free throw rate (FTA/FGA) nearing a ridiculous 60%.

Seth Curry, Austin Rivers and Andre Dawkins spearhead the Duke backcourt. Curry (52%) and Dawkins (44%) are deadly three point shooters but Curry’s game is a bit more diverse than Dawkins, who has attempted over 70% of his field goals from three point range. Curry often plays the point guard, despite not playing the position early in his career, and leads the Blue Devils in assist. Both players have quick shooting releases, know how to use screens and shoot off of curls. If early returns say much, you can’t get caught on a screen against either player without likely giving up three points.

Rivers entered the year as the No. 2 ranked freshman but hasn’t necessarily hit the ground running. His early struggles have been detailed by Grantland.com and examined from an NBA perspective by Chad Ford but he still brings an attacking skillset that the rest of the Duke roster is lacking. Rivers is shooting just 47 percent on twos and averages more turnovers than assists per game but leads Duke in free throw attempts and scores 14 points per game. He has an extremely quick first step, especially given his 6-foot-4, 200 pound frame, and will be tough for Michigan to keep out of the lane.

Down low Duke relies on Mason Plumlee, Ryan Kelly and Miles Plumlee. All three players have legitimate size at 6-foot-10+ and are solid if not spectacular. Both Plumlees are above average offensive rebounders and solid finishers, despite most of their points coming off of dunks and put backs. Mason’s offensive game is a bit stronger than Miles’s and he has a couple of go-to moves on the block including the jump hook. Kelly is a more dynamic scorer and has range out to the three point line where he connects on 40 percent of his attempts. Despite his 6-foot-11 frame, Kelly can play the four or the five and really hurt Michigan offensively last year despite proving a bit of a defensive liability.

John Beilein might have outcoached Josh Pastner with relative ease but he’s in for a chess match against Duke. Mike Krzyzewski’s team will not miss the defensive rotations and surrender the sort of easy baskets that Memphis allowed Michigan today. The Duke defense has been solid in each of the four factors early this season but not overwhelming in any one element. That recipe has worked well, as just one team, Belmont (1.01), has surpassed the 1 point per possession plateau versus the Blue Devils this season.

Last year in Charlotte, Michigan was able to score the ball effectively (1.16 points per trip) against Duke thanks to hot shooting (58% eFG%) and not turning the ball over (12% TO rate). Duke was able to outscore Michigan because of its ability to crash the offensive glass (36% offensive rebounding rate) and get to the free throw line (51% free throw rate). Michigan’s going to have to shoot the ball well to pull off an upset but last year proved that isn’t always enough. Duke’s offense comes down to three things: making threes, shooting free throws and grabbing offensive rebounds. For Michigan to beat the Blue Devils, who are undefeated all-time in Maui, it will have to negate Duke’s offensive attack in at least two of these three categories.

Ken Pomeroy gives Duke a 74% chance at the win, predicting a 70-63 final score. Let’s hear your thoughts, keys and predictions in the comments below.