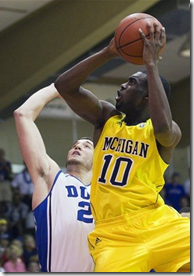 Michigan trailed Duke for 40 minutes but this was not an empty performance for the Wolverines. John Beilein’s team simply dug itself too great of a hole to overcome despite an extremely impressive second half offensive barrage. Despite failing to advance to the final, there’s little doubt that this relatively unproven Michigan team left this game as a better team than it was this morning.

Defensively, Michigan simply wasn’t good enough. Duke shot the ball extremely well – 60% on twos, 52% on threes, 69% eFG% – and the scary part is that those numbers aren’t that much better than their six game averages. The end result was Michigan surrendering 1.28 points per possession, its worst per possession output allowed since the tail end of its six game losing streak last season. To Michigan’s credit, the Wolverines actually did a good job of rebounding, grabbing 75 percent of the few shots that Duke did miss. Duke’s free throw rate was buoyed by Michigan’s intentional fouling at the end of the game but the Wolverines still gave away too many fouls around the hoop. Michigan’s most effective means of getting a defensive stop in this game might have been drawing charges. This is a Duke team that can really shoot it against anyone but Michigan’s defense will need to play better going forward.

This was a tale of two halves for the Wolverine offense. Michigan scored 22 points on 28 first half possessions (.79 per trip) compared to 53 points on 38 possessions (1.39 per trip). As bad as Michigan’s first five possessions were in the first half (2 missed FGs, 5 TO), the first six to start the second half were equally impressive (6 FGM). Michigan shot the ball very well with an effective field goal percentage of 55% (57% on twos, 33% on threes) and turned the ball over just three times in the final 37:45 of the game. This was the best offensive performance of any team versus Duke this year as Michigan scored 1.17 points per trip, significantly better than the 1.01 PPP Duke surrendered to Belmont in its opener. Michigan’s offense has improved with each game and seems to gradually have found a groove.

John Beilein emphasized before the Wolverines left for Maui that this tournament was designed for him and his staff to learn more about this team. The first two games have definitely served that purpose. The win over Memphis proved – I would argue perhaps most importantly to Michigan’s players – that the Wolverines are capable of playing with the nation’s top teams. Tonight’s loss to Duke was a concrete sign that this Michigan team has some backbone in the face of adversity that last year’s team demonstrated down the stretch. Michigan played timid out of the gate and took Duke’s best shot to the chin but was able to answer almost every Duke run and cut the deficit to four points in the second half.

The final test will be playing a third game in three days, the third place game (likely) against a struggling UCLA team. UCLA has some talented pieces but is a team that the Wolverines are very capable of beating. Scheduled to tip off at 7:30 ET on ESPN2 and if Michigan is able to bounce back and execute it will leave Maui with a third place finish and a successful 2-1 record.