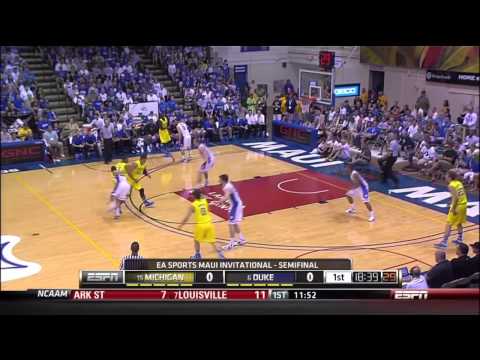 I don’t know if Michigan was intimidated, too fired up or just caught up in the moment but its first five possessions of the game were frustrating and uninspired. Sloppy turnovers, air balls, a lack of offensive flow and flat out poor play defined this stretch. Michigan fell behind 9-0 early and looked more like a team in Cameron Indoor than the Lahaina Civic Center. This game looked very much like it would be a Duke blowout early on. As bad as the opening possessions were, Michigan was able to regroup with a run of its own and crawl back to 11-9. This opening stretch still put the Wolverines, who were never able to regain any real sort of offensive efficiency in the first half, into a situation where they were playing from behind for 40 minutes. The game would have changed had Michigan gotten off to a better start but perhaps with a more even start one of the Wolverines second half runs could have much them into the lead.

2. Michigan scores on first six possessions of second half

We always emphasize the starts and finishes of halves in Five Key Plays and both of these first two sequences are a great example of why. Michigan came out with purpose and energy and made it clear that this was going to be a game for the final 20 minutes. First it was mini 4-0 run that led to an immediate Duke timeout. The first basket was a great pick-and-roll assist from Burke to Morgan, a clear sign that the duo is developing a nice chemistry. The second basket is a strong Smotrycz drive, crossover and finish, a move that Michigan needs to see more of if Smotrycz is going to become a consistent scorer this season. The rest of the run is spearheaded by freshman point guard Trey Burke – another (even better) screen and roll assist to Morgan, a strong take to the bucket, a three point assist to Hardaway in transition and a drive and kick to Evan Smotrycz who makes another strong drive to the basket for the and-one. This is just great offense from Michigan and a great sign individually for Burke (especially), Smotrycz and Morgan.

Michigan had done an admirable job to cut the halftime deficit from 12 points to six points in less than 10 minutes but this stretch really hampered Michigan’s comeback chances. First, Novak has a great three point look in transition with the chance to cut the deficit to just three points and catches front rim. On the ensuing defensive position, Burke gets screened and the defensive rotation leaves him forced to box out Miles Plumlee and the Duke lead grows to eight after an easy put-back. Burke attempts to take matters into his own hands on the next possession, forcing a driving attempt and ending up on the ground after a circus shot. Duke pushes the ball a bit and Burke is left lagging behind the play as Seth Curry drifts open for a wide open three pointer. In a flash, the Duke lead has gone from potentially three points to 11. Michigan would make runs later in the game but this stretch really ended the Wolverines early second half push. And as great as Trey Burke was last night – he was the main reason Michigan was able to make this a game in the second half – this is a reminder that he’s still only played five collegiate games.

Michigan was down 10 with under three minutes to play and easily could have folded as Tim Hardaway Jr.’s three point attempt rimmed away but Zack Novak made what can only be described as a typical Novak play. Novak is the only U-M player crashing the glass and swoops in from the opposite wing to wrestle away a near-side rebound from in between three Duke players. After a quick timeout, Michigan scores two points on the free possession thanks to a Stu Douglass jump shot. The Wolverines didn’t come all the way back after Novak’s rebound but they did manage to cut the deficit to six points in two different instances after that play. Plays like this are why it’s hard for John Belein to take Novak off of the floor (he played 39 minutes in this one) and are almost certain to pay dividends down the road and make a difference between winning and losing in a close game or two.

Of course it’s Novak that chases down a streaking Ryan Kelly and you know there’s not a strand of DNA in Zack that is going to allow Kelly to score an easy layup. However, this is pretty much a by-the-book intentional foul. To his credit, Novak goes for the ball with his right hand first but once you wrap the other hand around and grab a player on a break away you are always going to be called for an intentional foul. This was also the play that essentially ended Michigan’s tough-to-die comeback hopes.