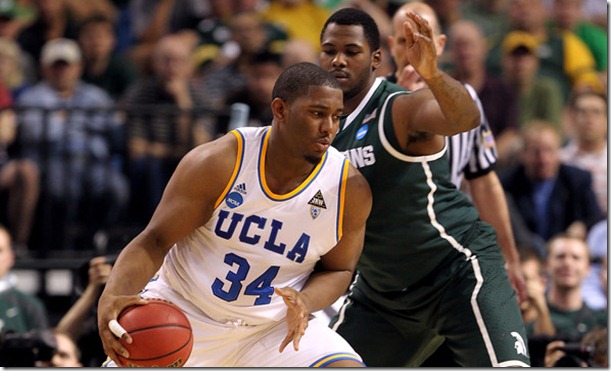 Losers bracket, consolation or third place games can be among the most dangerous, and sometimes most important, games in any pre-season tournament. The difference between a 2-1 and 1-2 finish is significant especially when matched-up with a team that has as many question marks as UCLA.

The first month of UCLA’s season has been nothing short of a rollercoaster. UCLA started 0-2 with a pair of home losses to mid-majors: Loyola Marymount and Middle Tennessee State. The Bruins’ leading returning scorer and rebounder, Reeves Nelson, has already been suspended, reinstated, missed the team flight to Maui, flew to Maui on his own, and been suspended for the first half of the Chaminade game. As a unit, UCLA has only beaten Division II Chaminade and has failed to beat a Division I opponent this season.

The good news for Michigan is that UCLA’s woes begin at the three point line. Division I opponents have made 27 of 42 three point attempts on the season for a blistering 64%. UCLA has struggled to defend the three and hasn’t been much better at making threes of its own, especially stateside (6/35 for 17%) but did seem to find a bit of a shooting groove last night versus Kansas, knocking down 8 of 14 triples in a thinly veiled comeback effort. Despite that hot performance, this appears to be a Bruin team that will allow some good three point looks and is more likely to shoot the ball from distance in a similar fashion to Memphis rather than Duke.

Every Division I team that has faced UCLA has surpassed 1 point per possession offensively and the the Bruins have failed to top that mark against D1 competition. The early strengths of this UCLA team have been cleaning up the defensive glass, something that shouldn’t affect Michigan much, not fouling, and valuing the basketball.

Jerime Andersen, Lazeric Jones and Tyler Lamb are the three primary threats in the Bruin backcourt. Jones, a senior, was a starter on last year’s NCAA Tournament team that beat Michigan State and is more of a setup man than scorer. Anderson and Lamb, both consensus top-50 recruits at one time, played significant minutes off the bench a season ago. Anderson is the most effective and efficient scorer of the bunch but is more efficient from outside than around the basket for his career but is an even 7 of 13 from two point and three point range this season. Lamb is a career 20 percent three point but exploded for 15 points (including 3-4 3pt shooting) last night versus Kansas.

Analyzing the UCLA frontcourt is an experience. The group features three former McDonald’s All-Americans but the group has been as dysfunctional as it was highly regarded in high school. Josh Smith is listed at 6-foot-10, 305 pounds, and is probably one of the only players Michigan will face bigger than last year’s version of Derrick Nix. He’s obviously enormous but conditioning is an issue and he had 1 point, 1 rebound, 2 turnovers and 5 fouls in 13 minutes last night versus Kansas — Jordan Morgan should be able to use his quickness to get easy buckets. The Wear twins, David and Travis, were McDonald’s All-Americans that transferred from North Carolina after playing 10 minutes per game as freshmen. Both members of the 6-foot-10 duo are averaging around 10 points per game but they were less than impressive versus Kansas combining for six points on 2 of 10 shooting and six rebounds. Finally, you have 6-foot-8 forward Reeves Nelson. Nelson averaged 14 points and nine rebounds a season ago but the start to his junior campaign has been nothing short of a nightmare for all involved parties.

UCLA has a group of players that have their fair share of individual talent. As far as cohesion, attitude and momentum… Those elements appear to be absent from the Bruin locker room. This game is still a bit scary because despite its struggles, UCLA feels like a team that’s capable of putting a strong performance together. Kansas dominated UCLA for most of their game last night but a hectic 12-0 Bruin run powered by seemingly lucky three pointers almost swung the game in UCLA’s favor. If the Bruins get a few easy baskets, Michigan could find itself in a dicey position.

John Beilein and Ben Howland have plenty of history – whether it’s Pitt-West Virginia, West Virginia-UCLA or Michigan-UCLA – which should add an interesting dynamic to this game. Beilein has gotten the best of Howland most recently, namely in Michigan’s upset of UCLA at Madison Square Garden in 2008. That should help both coaches prepare for the game on short rest but, given recent results, I think the advantage goes to John Beilein.

UCLA has yet to play great basketball and Michigan should win this game. The Bruins’ shooting woes should help mask a Michigan defense that has been up-and-down and a lot of the easy looks that U-M saw versus Memphis should be available against a UCLA defense with clear liabilities. If Michigan wins this game it’s tough to call the trip to Maui anything other than a success. A loss would leave a bitter taste and a long pre-Thanksgiving flight home.