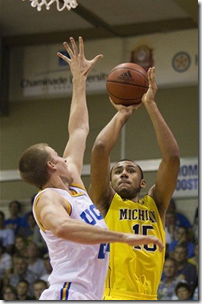 It wasn’t always pretty, and Michigan allowed UCLA to hang around for a bit too long, but in the end the Wolverines took care of business and knocked off the UCLA Bruins convincingly by a score of 79-63. The win moved Michigan to 5-1 overall (2-1 in Maui) and secured a third place finish in the 2011 Maui Invitational. The story for John Beilein’s club in this game was on the offensive side of the ball where the Wolverine offense showed significant improvement for the sixth consecutive game.

Michigan’s offense was nearly flawless, scoring an impressive 1.29 points per possession. The most encouraging aspect of the Wolverine’s offensive dominance was success in areas other than shooting. This wasn’t just Michigan hitting a barrage of three point shots, this was systematic destruction of a dysfunctional Bruin defense. Michigan did shoot the ball extremely well – 67% on twos and 50% on threes for a 69% effective field goal percentage – but the Wolverines attempted attempted an out of character 70 percent of their field goals from inside the arc. Michigan also got to the free throw line more than we’ve seen in the past but more importantly dominated the offensive glass, grabbing 43% of its missed shots. The Achilles’ heel of the Michigan offense was also a deviation from the norm with U-M struggling to hold onto the basketball and turning it over on 23% of its possessions.

The Michigan defense wasn’t nearly so perfect, allowing UCLA to reach a season best per possession scoring output (versus D-I opponents) of 1.00 point per possession. Luckily, UCLA was content to bail Michigan’s defense out by attempting threes – 4 of 17 from three point range – but UCLA did make half of its twos. Michigan’s defensive rebounding also left something to be desired as the Bruins grabbed 36% of their misses on the night. Michigan’s defense might not have been awful on the night but these last two games have raised some legitimate concerns, or areas of focus, for the U-M defense going forward.

It was tough not to question Michigan before these three games in Maui. The Wolverines first three performances were as nondescript as their opponents and many outsiders, both partisan and neutral, expected a long week for John Beilein’s team in Hawaii. It remains to be seen just how good Memphis (probably pretty good), Duke (probably very good) and UCLA (probably terrible) are but Michigan earned the results it needed. After a third place finish in Hawaii, Michigan sits at 5-1 and will travel to Virginia next Tuesday for the Big Ten-ACC Challenge as a team carrying a significant injection of confidence.