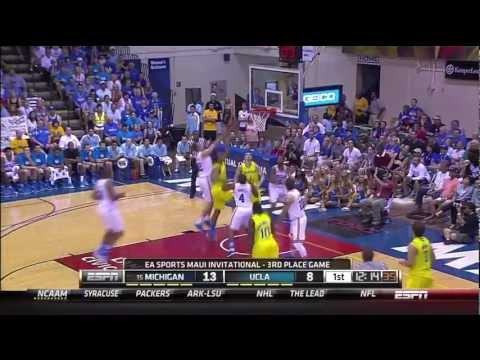 1. Jon Horford’s 5-for-5 performance in the first half

We’ve been waiting for Jon Horford to show why John Beilein thought he was good enough to start in front of Jordan Morgan early in the season. Horford was solid against Memphis and struggled against Duke but he had a breakout performance in the first half versus UCLA, scoring 12 points off of 5-for-5 shooting and grabbing seven rebounds. He was the benefactor of a couple great passes by Hardaway and Burke but Horford made the right reads, caught the ball effectively and finished around the hoop. His most impressive first half bucket came with 2:30 to play. Horford establishes position against Travis wear on the block and receives the entry pass from Stu Douglass, a rarity in the Michigan offense. With Wear on his back, Horford fakes left, turns back right off one dribble, and nails an fade away jumper right over Wear. Michigan simply doesn’t have playmakers with their back to the basket and this is a great sign that Horford has the potential to be that back to that back to the basket scorer.

2. Trey Burke’s spin and finish, followed by a freshman move on the defensive end

With ESPN’s draft guru Chad Ford in attendance for the Maui Invitational, Trey Burke generated a bit of NBA Draft buzz this week. This play is an NBA move. In transition, Burke flies into the lane and spins, finishes and draws the foul.  This wasn’t Burke’s best game but, with time, he’s showing signs that he has the ability to be an elite Big Ten point guard.  Two possessions after his beautiful finish, Burke reminds us that he’s still a freshman and commits a silly foul under the UCLA bucket. Off a missed 3 pointer, Reeves Nelson grabs the rebound under the hoop and puts it back in for a two. Burke, who’s nine inches shorter and not strong enough to influence Nelson’s shot, reaches in and gets called for the silly foul. Freshmen mistakes are to be expected but you can bet that fouls like this (and on jump shooters) will be a point of emphasis in film sessions going forward.

Tim Hardaway Jr. averaged 20 points per game in Maui and was named to the All-Tournament team and this dunk was one of his more emphatic highlights. Off a handoff from Morgan, Hardaway explodes through the right side of the lane all the way to the basket thanks the dramatic lack of help from any UCLA defenders. As was the case most of the night, Josh Smith is still stuck near the top of the paint as Hardaway throws it down. Michigan’s next offensive possession shows that Hardaway is no prima donna superstar. Hardaway dives on the ground between three UCLA defenders after a Jordan Morgan back door pass is deflected. He doesn’t just tie up the ball, Hardaway somehow comes away with the ball and finds Morgan, who goes up and draws the foul. Morgan missed both free throws, and the play might not have helped Michigan on the scoreboard, but it didn’t take away from the great hustle by Hardaway.

Zack Novak had a career night and this might have been his biggest shot of the game. The play starts on the defensive end where Michigan does a great job of doubling Josh Smith with Evan Smotrycz and Zack Novak providing great help defense for Jorgan Morgan who was trying to front the post. Stu Douglass comes up with the loose ball and looks to run, outletting the ball to Tim Hardaway Jr. Hardaway could shoot the ball in this situation, and has forced this shot many times in his young career, but instead he makes the alert cross court skip pass to Zack Novak who buries the three. This pushes Michigan’s lead to double digits and UCLA would only cut the lead to eight points twice in the final 11:35.

UCLA was already living dangerously, trailing by 13, but this Hardaway 3-pointer served as the knock out blow. Hardaway’s deep three pointer capped a 15-4 Michigan run and giving the Wolverines a 16-point lead with just over eight minutes to play. Hardaway gets the ball off of what amounts to a triple screen from Douglass, Burke and Smotrycz and the UCLA defender makes the mistake of playing under the screen. Hardaway is deep, easily NBA range, but doesn’t hesitate and fires the three point attempt knowing that he has space.