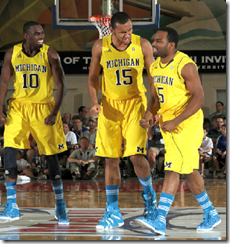 Michigan traveled home from Maui with a 2-1 record and a third place finish. The wins over Memphis and UCLA were impressive and the loss to Duke was competitive. From a realistic standpoint, it’s the best outcome the Wolverines could have hoped for short of a championship.

John Beilein emphasized what a great opportunity the tournament was for the team and coaching staff to grow and continue to learn what works, what doesn’t and what pieces they have to utilize. Six games into the season, here a few early observations and takeaways.

It’s just six games but Michigan has converted around the basket better than we saw a season ago. That’s especially impressive considering the Wolverines lost their most dangerous slasher from a season ago, Darius Morris. Michigan has made 63 percent of its two point field goals through six games, the best 2-point field goal percentage in the country. It’s just six games, and Michigan still attempts 39% of its field goals from three point range, but some of the individual numbers are impressive.

Every Michigan player has improved his two point shooting numbers from a year ago in early season play – most by a significant margin.

Zack Novak has shown off an improved jumpshot from a step inside the arc and made a few strong takes to the basket. Stu Douglass has even taken the ball all the way to the cup. Tim Hardaway Jr. made his 27th two point field goal on December 28th last season, the Big Ten opener versus Purdue. He’s made 27 two point field goals in six games this year. Michigan’s big men, Jordan Morgan and Jon Horford, were both solid finishers a year ago but have proven that they can finish passes from Burke and Hardaway just as easily as passes from Darius Morris.

Trey Burke has had his ups and downs but is clearly comfortable shooting the mid-range jumper or taking the ball all the way to the basket. Evan Smotrycz might have missed some bunnies this year but he’s attempted 67% of his field goals inside the arc compared to 39% a season ago.

Darius Morris attempted a third of Michigan’s two point field goals a year ago so it was clear that certain players on the Michigan roster that weren’t comfortable slashing would have to assume greater roles. That’s not surprising but what is surprising is that Michigan has remained so consistent inside the arc even against athletic front lines like Memphis, Duke and UCLA.

Michigan’s offense was not good during its first three games in Ann Arbor. The Wolverines struggled to score the ball against a Division II team and a pair of teams with KenPom ratings under 300. John Beilein’s team scored 1 point per trip in those three games but exploded in the Pacific Ocean for 1.18 points per possession over three games.

Michigan had more efficient offensive performances against Duke and UCLA than any of their other opponents and the second best performance against Memphis. UCLA and Memphis have been far from the epitome of defensive perfection this season but there are some pretty clear signs that players on this year’s roster are really starting to understand their roles offensively.

Trey Burke hasn’t been perfect. He’s turned the ball over on 21% of his possessions, is shooting 60% on free throws, made one of eight threes in Maui and has the tendency to commit silly fouls. Despite those freshman mistakes, Burke has proven that he’s ready to play at this level. His quickness, playmaking ability and competitiveness have already proven vastly important through Michigan’s first six games.

Burke handed out more assists during the Maui Invitational than any player from any of the eight participating schools. He averaged 35 minutes per game in Maui, tied for the U-M lead, which serves as a ringing endorsement of John Beilein’s trust. The turnovers will decrease and he will find his three point shooting stroke (1-8 3pt in Maui) because he’s just too talented of a shooter not to. Burke is also the sort of player that can get a basket out of nothing – give him the ball in an isolation when the offense is struggling and he’ll make something happen.

He will continue to grow. He’s already improved significantly in the pick and roll game, displaying solid chemistry with Michigan’s bigs, and that will continue. He’s not Darius Morris, and not a similar player in any regard, but he’s the Michigan point guard of the present and future.

Questions on the Bench

Michigan went to its bench more often in Maui than we saw in early season play but there still appear to be some significant question marks. Michigan’s bench scored 55 points in three games in Hawaii and 78 percent of that production came from Stu Douglass and Jon Horford. Douglass and Horford have clear roles established and seem capable to serve as the No. 6 and No. 7 players in Michigan’s rotation.

Beyond that, there are concerns. Matt Vogrich had four points, four rebounds, three fouls and a turnover in 29 tournament minutes. His three point stroke has been absent – he didn’t make one in Maui – and he needs to find it to produce. Freshman Carlton Brundidge (2 points, 2 turnovers, 5 minutes) appears to have been passed by Eso Akunne on the depth chart. Akunne hit a pair of big shots (5 pts, 2-2 fg, 7 minutes) and it will be interesting to see if he earns more minutes in upcoming contests. Colton Christian and Blake McLimans have been relatively quiet while freshman Max Bielfeldt appears destined for a redshirt after sitting out Michigan’s first six games. (Photo: MGoBlue)

The most likely scenario is that Vogrich regains some confidence from three point range and slots into that No. 8 spot in the Michigan rotation. He can play the two or the three and Beilein likes to try to really spread the floor with him on the court. If he continues to struggle, you begin to wonder if someone else gets a chance. Akunne has looked the best but his potential might be limited. Brundidge appears to be facing a steeper learning curve but he could get a chance. Regardless of who earns more opportunities going forward, this appears to be a team that will rarely go deeper than an eight man rotation, especially in Big Ten play.

Next Up: Road Challenge

Michigan has passed its first test with a 2-1 finish in the Maui Invitational but more challenges lie ahead. The first is Michigan’s first true road game of the season, a trip to Charlottesville, VA to face Virginia in the Big Ten-ACC Challenge. It’s not Duke or North Carolina but this is a road game against an ACC team that will likely find itself on or around the bubble in March. Only one high-major team (Wisconsin) has played slower than the Cavaliers this season and they have been one of the best defensive teams in the country thus far. If the Big Ten wants to win its third consecutive Challenge, Michigan will likely have to take care of business on the road. (Click here for a listing of 2011 Big Ten-ACC Challenge match-ups.)