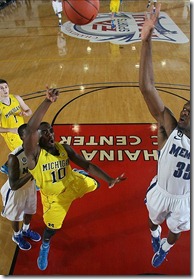 Michigan fans have come to understand the importance of the NBA Draft process after losing their leading scorer to NBA Draft early entry in each of the last two seasons. With the tentative agreement on a new NBA collective bargaining agreement and Michigan playing in a high profile tournament over Thanksgiving, NBA Draft talk probably won’t be more prominent until April.

The first notable development is the affect of the new CBA on NBA Draft rules. Adrian Wojnarowski reports that a committee will be established to examine the NBA Draft age limit but it’s not expected to affect the 2012 Draft:

“Only the agreement to have the committee may be part of the new CBA,” the source said. “I doubt it will have any affect on the 2012 draft.”

Wojnarowski also discusses an MLB-style system which would allow players to enter the draft out of high school but retain eligibility if not selecting, opting to stay in school for a minimum of two seasons.

There are three important names for the future of Michigan basketball that are generating NBA Draft buzz: Tim Hardaway Jr., Mitch McGary and Trey Burke. All three would be eligible for the 2012 NBA Draft under current rules (McGary is eligible as a post-graduate prep school student).

Both Hardaway and Burke generated some draft buzz with their performances in the Maui Invitational. Hardaway was named to the all-Tournament team after averaging 20 points per game while Burke led the tournament in assists as a true freshman. Hardaway was considered an NBA prospect before the tournament, Burke was not.

Now Chad Ford has Hardaway ranked 56th on his big board with Burke in the 82nd slot. He was complimentary of both players after watching them in person in Maui:

Tim Hardaway Jr., G/F, sophomore — Hardaway wasn’t considered a blue-chip prospect coming out of high school, but a solid freshman season put a number of scouts on notice. Hardaway could slash, he could shoot and he wasn’t afraid. This season, he’s cutting down on bad shots, playing with more confidence and he’s grown an inch. In Maui he averaged 20 points and 4.7 rebounds per game and showed a lot of versatility. I don’t think he’s going to join his father as a NBA All-Star someday — he, ironically, lacks the handle for that. But he’s looking more and more like a late first/early second-round prospect.

Trey Burke, PG, freshman — Burke was another player that wasn’t on many draft boards going into Maui. By the time he left, he was on everyone’s. Burke isn’t a special athlete and he lacks ideal size for his position, so what’s the buzz about? He played with amazing poise, got all of his teammates involved and hit big shots from all over the floor. There is a dearth of true point guards in the college ranks right now. Burke looked the part of a future NBA backup point guard as a freshman playing in the first month of his career. If he can continue to improve, he’s a possible first-round prospect down the road.

NBADraft.net was also impressed with the duo, naming Hardaway one of the top three draft prospects in Maui. NBADraft.net has Hardaway projected as the 17th pick in the 2012 NBA Draft but also questioned Hardaway’s handle:

Hardaway consistently plays with desire and intensity and is a fierce competitor. His motor allows him to maximize his solid, though unspectacular, athleticism. Hardaway outclassed the Memphis wings with his skill level as well as outrebounding both Adonis Thomas and Will Barton at key points of their match up. He shows the ability to pull up off the dribble and also shows a high basketball understanding moving well without the ball and playing within the team concept. He’s got very skinny legs and some feel his athleticism is just average for the next level. Apparently Tim Hardaway Sr. didn’t teach him his killer crossover as it doesn’t appear to be part of his game, yet.

Ford tempers expectations for Hardaway a bit in this interview with the Michigan Daily:

“He’s got good size for his position, he’s athletic, he can shoot the basketball, and he can put the ball on the floor, get to the basket,” Ford said. “He’s got a lot of the tools that you sort of look for in a wing. If he was a better ball-handler — and it’s ironic, because his dad was amazing — that’s probably his biggest weakness. I think he (also) needs to get a little more consistent from 3-point range. “But I think he’s a pro.”

“He won’t need the money, and a lot of times that’s a big issue for players,” Ford said. “He’s got his dad, (so) he’s going to have access to more NBA guys giving him their opinions, which means he probably won’t get bad info. I probably say he stays, but I’m always surprised.”

NBADraft.net is also bullish on Trey Burke and called the freshman point guard “absolutely fearless” and pointed out that he won the head-to-head match up with highly regarded Memphis sophomore Joe Jackson.

It hasn’t been the best month for 2012 commitment Mitch McGary who struggled at the National Prep Showcase a week ago. DraftExpress.com’s Jonathan Givony posted a detailed scouting report of McGary from the event:

McGary runs the floor extremely hard and plays with an unbelievable amount of energy, diving on the floor for loose balls and having no qualms about using his body to assert himself inside the paint. He clearly has a huge passion for the game, pounding his chest at any opportunity, firing up his teammates and being a very positive influence both on and off the floor. He boxes out opponents well and is a massive presence on the glass, often going out and grabbing rebounds well out of his area thanks to sheer desire.

There’s little doubt that McGary will have an instant impact at Michigan with his terrific size and energy level. Few players in the Big Ten can match up with him physically, and that coupled with his aggressiveness and tenacity will allow him to produce from day one.

How much upside McGary still has to grow into remains somewhat of a question mark, though. Born in June of 1992, he’s significantly older than almost any of his colleagues in the 2012 high school class. He’ll turn 20 nearly six months before playing his first game at Michigan, making him the same age or older than some players who have already been drafted or are currently sophomores in college, such as Tobias Harris, Harrison Barnes or Jeremy Lamb.

The full report delves into McGary’s strengths offensively and defensively while discussing his viability as a draft prospect. Currently DraftExpress has McGary rated as the No. 34 prospect in their top 100 and not projected in the 2012 or 2013 mock draft. Chad Ford echoes a similar rating, slotting McGary at No. 36 in his top 100. NBADraft.net is a little higher on McGary, having him projected at No. 3 in the 2013 NBA Draft.

The bottom line is that Tim Hardaway Jr., Trey Burke and Mitch McGary are all firmly on the NBA Draft radar. As things stand, none of the three are projected as sure fire first round picks this season and wouldn’t appear likely to enter the 2012 draft. Hardaway has long been rumored to be on a three year plan, McGary’s performance in the National Prep Showcase left scouts feeling he needed at least a season of college and Burke has played his way onto the radar but has a long way to go as a guard that lacks elite level size or athleticism for a NBA point guard. Of course at this time last year, Darius Morris was a kid who looked to be improved but was far from the NBA.