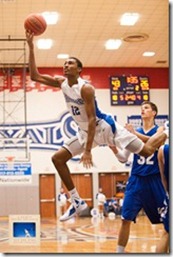 It was a busy weekend for Michigan basketball commitments as the high school basketball season begins to heat up.

First, there were a handful of commitments on hand for the Michigan football team’s win over Ohio State on Saturday including Mitch McGary, Mark Donnal and Austin Hatch. Two commitments that weren’t in attendance were Glenn Robinson III and Zak Irvin. Those two were facing off in a game of their own as Robinson’s Lake Central squad took on a Hamilton Southeastern team led by MSU bound Gary Harris and U-M junior commitment Zak Irvin.

Hamilton Southeastern won the game, 79-64, thanks to a 25 point performance from Michigan State commitment Gary Harris but both Michigan commitments were impressive. Robinson finished the day with 30 points and 14 rebounds – including this monster dunk– while Irvin had 19 points and five rebounds in support of Harris. Michigan assistant coaches Jeff Meyer and Lavall Jordan were in attendance along with Michigan State’s Tom Izzo. (Photo: Jamie Owens/JScottSports)

Robinson also had 25 points, seven rebounds and three assists in Lake Central’s 72-47 season opening win over West Side on Wednesday. Mitch McGary, while home for Thanksgiving, was also in attendance to support his fellow commitment, and AAU teammate, Glenn Robinson III.

The NWI Times also profiled Robinson a week ago, including a look at the first time that his dad saw him play last March and whether Robinson has the opportunity to win Mr. Basketball this season.

“Tre is a better play right now than I was at his age,” Big Dog said. “We have different games. I was more of a post in high school. I learned the perimeter game at the next level.

“He’s a better shooter than I was. He’s a better all-around player than me, too. His vertical leap, man, it’s great. He’s shorter than I am but when he plays he’s up there where I used to be.”

The distance and the time away is not ideal. Tre has built a relationship with future Wolverine teammate Tim Hardaway Jr., whose father was also a NBA star and away from home a lot.

“We’ve talked about it,” Tre said. “He’s helped me through it. But that’s the way it is in the NBA.”

The full article is certainly worth a read and Lake Central will next be in action on Friday at Valparaiso.