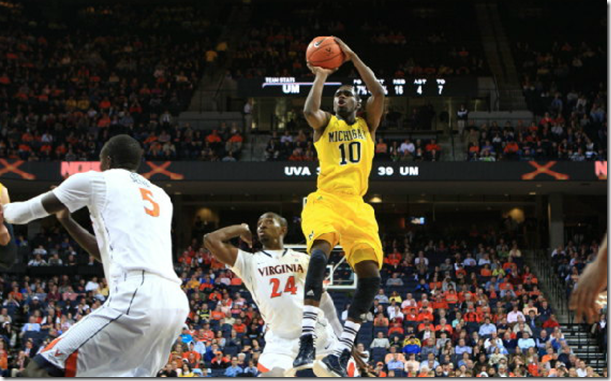 Michigan and Virginia battled back and forth for 30 minutes but somehow the Cavaliers always felt like the aggressors. Eventually Michigan’s offense sputtered and Mike Scott awoke to help Virginia pull away with a 19-2 run late in the second half. The result was a 70-58 Virginia win, dropping Michigan’s record to 5-2 on the season.

Michigan was never able to find an offensive rhythm against Virginia’s Packline defense. The Wolverines scored just .93 points per trip despite shooting 45 percent from three point range. Michigan, obviously bothered by Virginia’s physical play, was unable to convert the two point shots that carried the offense in Maui and converted just 42% of its two point looks. That lackluster two point shooting was accompanied by first half turnover woes and little to no production on either the offensive glass or at the free throw line.

Michigan’s offense degraded to glorified isolations on far too many plays. U-M players got bodied off of cuts and screens for most of the night and the crisp offensive motion that we saw against Memphis, Duke and UCLA was glaringly absent. This isn’t the last physical and compact defense that Michigan will play against and the Wolverines are going to need to learn how to execute their offensive sets in these sort of match-ups.

Michigan won’t be the first team that struggles to score the ball against Virginia but its struggles on the defensive end are more troubling. Scoring has been a laborious process for the Cavaliers this season and they weren’t scoring in the first half either. Michigan’s defense crumbled in the second half. Virginia scored 1.10 points per trip for the game thanks to an impressive 1.37 points per possession in the second half. Michigan’s defense was plagued by late double teams, Virginia penetration, poor closeouts and an inability to guard Mike Scott. There were some great plays by Virginia but there were also far too many flat out defensive breakdowns.

Memphis and UCLA might not have made Michigan pay for its defensive mistakes but Duke, and now Virginia did. Percentage of made field goals assisted is far from a flawless statistic but it’s a great indicator of how cohesive an offense is on a given night. 73% of Virginia’s field goals were assisted compared to just 36% of Michigan’s makes.

The decision to sit Tim Hardaway Jr. for 16 minutes in the first half can be debated to no end. It’s a risk averse strategy that is often frustrating but John Beilein’s track record says that his players with two fouls in the first half are going to sit. Michigan actually held its own for most of the time Hardaway was on the bench but things got dicey when Smotrycz went to the bench with his second foul as well. Michigan went with a lineup featuring a Novak-Christian-McLimans frontcourt and allowed Virginia, who had been trailing most of the half, to escape with a one point halftime lead.

That stretch gave Virginia confidence entering the second half but the 19-2 run that won the game for Virginia was fueled by Mike Scott dominating the game. Michigan’s double team from the baseline was relatively effective against Scott in the first half but he got loose in the second. Scott began to beat the Michigan double and force the U-M defense to collapse – the result was consistent: an easy bucket for Scott or a kick out to a wide open three point shooter.

There’s no denying the fact that Michigan took one on the chin tonight. Virginia played a more physical game and clearly outplayed the Wolverines. Virginia’s non-conference schedule is not difficult, so it might be a while before we know exactly how good Tony Bennett’s team really is. However, this was a road game against a team that should finish in the top half of the ACC. A loss is frustrating but far from inexcusable. Michigan has the week to regroup before playing its first home game in over two weeks as it hosts Iowa State.