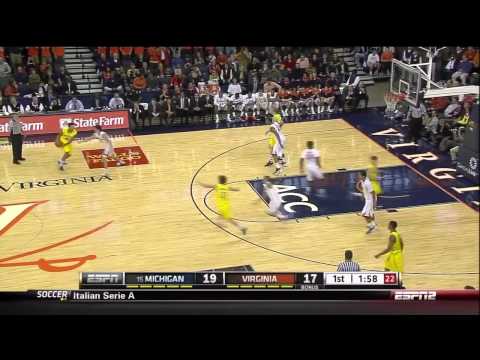 1. Joe Harris’s 3-pointer, followed by a turnover and foul by Colton Christian, spark a 10-4 Virginia run to end the 1st half

With just over two minutes to go in the first half, Virginia had just 14 points. Michigan was up five and surviving without the help of Tim Hardaway Jr, who had spent the majority of the half on the bench with two fouls. With 2:15 to go, Virginia finally made its move. First, Joe Harris nailed a 3 right over Stu Douglass. It wasn’t horrible defense by Douglass — the 6-foot-6 Harris simply rose above Douglass’s outstretched hand from the left wing and knocked down the contested shot. On the ensuing Michigan possession, Colton Christian lazily attempted to pass the ball to Novak on the right wing and Harris tipped the pass away. Harris was fouled by Christian in the scrap for the ball and, with the Cavaliers in the bonus, went to the line and made both free throws. Suddenly the game was tied at 19 and the crowd was alive. Virginia ended the half on a 10-4 run in the final 2:15 of the game and took momentum heading into the break. In his press conference on Monday, John Beilein stressed the importance of turnovers, especially on the road and Christian’s really proves how costly turnovers can be.

Evan Smotrycz continues to agitate fans with his up and down performances. Early in the second half, he had two great moments. Off a screen from Jordan Morgan, Hardaway drove the lane, attracting Smotrycz’s defender and leaving Smotrycz open in the corner for three. Smotrycz didn’t hesitate, and drained the deep ball to give the lead back to Michigan, 30-29. On the next possession, Smotrycz showed off another one of his skills – driving to the bucket. Off a pass in transition from Burke, he faked the 3-pointer, took two dribbles to his left toward the bucket, and finished a tough bucket inside off the glass. These are the sort of plays that Michigan needs Smotrycz to make offensively and he has the ability to change games when he’s producing. But on the very next possession, Smotrycz followed two great offensive possessions with his third personal foul and earned himself a seat on the bench for the next five minutes. It’s becoming clear that Michigan needs Smotrycz on the floor and producing as a peripheral scoring option and his tendency to pick up cheap fouls continues to hinder his ability to serve in that role.

3. Jordan Morgan’s dunk, rebound, screen and charge helps give Michigan its biggest lead of the 2nd half

This was probably Jordan Morgan’s most dynamic play of the season so far. Just outside the 3-point line on the left wing, Morgan faked the handoff to Burke. The Virginia defender bit on the fake, giving Morgan a clear lane to the bucket. Morgan saw the lane and took full advantage, finishing with a thundering dunk and silencing the Virginia crowd. Morgan grabbed the defensive board on the other end, then set a screen for Hardaway at the top of the key, giving Hardaway just enough space to launch the 3 for his first points of the game. Suddenly Michigan had its largest lead of the second half, 39-34. Morgan wasn’t quite done there—on the next Virginia possession, he positioned himself perfectly in the middle of the lane and drew the charge on Harris. The costly part of this sequence was that Harris’s layup counted despite the charge, allowing Virginia to creep back into the game.

4. Virginia’s 19-2 second half run, spearheaded by three buckets and an assist from Mike Scott

All it takes is one or two mental lapses to let a road game spiral out of control. When you surrender a 19-2 second half run, you aren’t going to win many road games. The run started and finished with buckets from Harris, but it was spearheaded by Mike Scott, a fifth-year senior and the heart of this Virginia team. With a small Michigan lineup in the game — Douglass, Novak, Vogrich and Hardaway were all in at the time — Michigan simply had no answer for Scott’s size. Scott’s first bucket of the stretch came off an inbounds pass. With Hardaway switched onto him, Scott spun to his left and finished a floater in the lane right over the outstretched hands of the smaller Hardaway. On the next Virginia possession, Scott exploited Michigan’s lack of size again, snagging the offensive rebound over Novak and finishing off of another spin move close to the basket. Soon after, Michigan’s defense collapsed around Scott in the post, and he simply dished it out to the wide-open Brogden for the three. Even with the double team on Scott in Virginia’s next possession, Scott still found a way to score, draining a ten-footer in the face of Novak and prompting Fran Fraschilla to boldly announce, “Well, that’s the game right there.” It might have sounded drastic but his vision was prescient.

5. Stu Douglass’s 3 cuts the lead to 7, but a Virginia offensive board and 3-pointer on the other end all but seals the Virginia win

With 5:13 to go and Scott on the bench, Stu Douglass gave Michigan fans a ray of hope as he drained this deep three ball to cut the Virginia lead to 53-46. Down just seven, Michigan was a stop and a couple baskets away from finding itself back in the game. On the ensuing Virginia possession, Brogdon missed a three from the corner, but Virginia big man Assane Sene grabbed the offensive board. Sene kicked the ball right back to Brogdon, who didn’t miss his second opportunity. Instead of Michigan having the ball with a chance to cut the lead to two possessions, the Wolverines were right back on their heels and trailing by double digits.