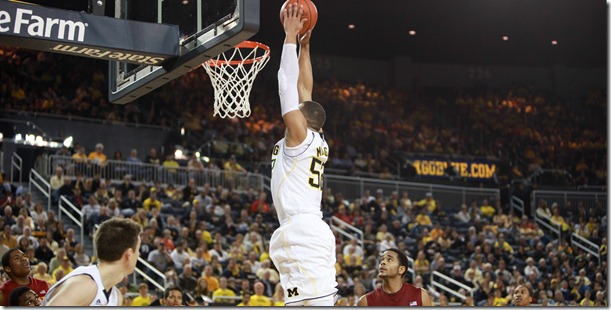 For five minutes, Iowa State looked to be every bit the offensive force that their early season numbers indicated. The Cyclones jumped out to an early 13-12 lead thanks to a trio of early three point shots. But Michigan’s defense responded and controlled the game from that point onward. Iowa State would score just 12 points in the final 13 minutes of the first half as Michigan’s offense picked up steam and ended the half on a 22-12 run. Michigan stretched its lead in the second half to as high as 22 points. A late Iowa State run narrowed the final deficit but Michigan cruised with a 76-66 win.

Barring the last five minutes, Michigan’s offense was extremely efficient on the day. Despite late struggles, the Wolverine offense hummed along at a 1.10 point per possession clip for the game. As has been the case when the Michigan offense works this season, baskets came easy inside the three point line. Michigan made 20 of 27 (74%!) two point attempts on the day but actually attempted more threes (7 of 29 for 24%). Every Michigan player made over half of his twos and the only player to miss more than one shot inside the arc was Jordan Morgan, who was 7 of 10 on the day.

Michigan’s defense was successful because Iowa State couldn’t make shots. The Cyclones were made 45% of their twos and 22% of their threes – 40% effective field goal percentage – and those numbers were glorified by a late run with the game out of hand. Royce White got his – 22 points (10/15), 13 rebounds and three assists – but Michigan did an above average job defending Iowa State’s three point shooters. After knocking down three early triples, the Cyclones made just one three pointer in the next 30 minutes and finished the game 6 of 27 from three point range. Michigan held its own on the defensive glass for 35 minutes but gave up some critical late offensive rebounds which allowed Iowa State to creep back into the game late.

Michigan’s performance was what should be expected against a mid-level major conference opponent at home. Michigan weathered a small run early, took control of the game by half time and expanded their lead to start the second half. No starter was perfect, but they didn’t have to be. Burke, Hardaway and Morgan were effective offensively and Eso Akunne and Blake McLimans each added five points off the bench, the sort of boost that you expect in a home performance.

I’ve skirted around the last five minutes of the game when Michigan let an 18 point lead dwindle all the way down to just six points. Turnovers, bad decisions, missed shots and subpar defense led to the stretch but it was clear that the Wolverines checked out of the game. That bad habit could cost a game later in the season but it’s always better to learn that lesson in a game like this than an actual loss.

From here Michigan has a week off, it’s longest period of rest since the season began, to prepare for Greg Kampe and the Oakland Golden Grizzlies. The Grizzlies enter the game on a five game winning streak including a home win over Tennessee.