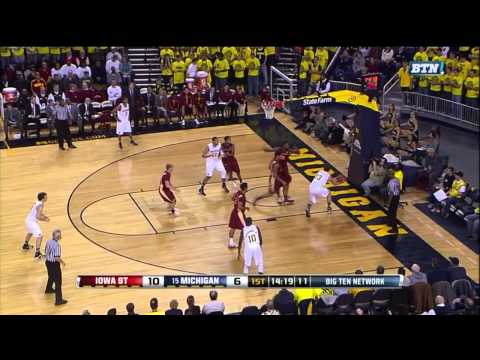 1. Trey Burke’s 8 straight points early in the first half

Coming into Saturday’s game, Michigan knew Iowa State could shoot it from the outside. They also knew that big man Royce White could cause some serious trouble in the paint. Early on Iowa State’s offense was working and Michigan’s offense appeared to be sputtering. The Cyclones opened the game on a 10-4 run and Michigan looked to be in trouble. That is, until Trey Burke restored order. Burke scored 8 straight points to calm Michigan fans’ nerves and put the Wolverines right back into the game. The sequence started with a simple pick-and-roll with Jordan Morgan. Burke took a couple dribbles right off the screen before going left after realizing his defender had overplayed the screen. Morgan does a great job sealing his defender and Burke gets all the way to basket for an easy two. On the next two possessions, Burke found his three point stroke and hit a pair of threes from the left wing. The 8-0 run not only fueled the Michigan offense, but seemed to provide confidence on the defensive end as well.

2. Eso Akunne and Blake McLimans spark a 13-2 run to end the first half

Who would’ve believed that Eso Akunne and Blake McLimans would play a pivotal role in a key Michigan victory? I certainly did not. But late in the first half, Akunne and McLimans both proved that maybe Beilein should think about giving them more playing time — especially with Douglass and Vogrich struggling and with Jon Hoford currently nursing a foot injury. With Michigan down 23-21 Akunne took a handoff from McLimans, and buried a 3 in the face of the Iowa State defender. The shot ignited the crowd and started the 13-2 Michigan run. Moments later, McLimans proved he can run the pick and roll as well. He found some open space in the paint and converted the easy bucket off a nice drop off pass from Hardaway. With 25 seconds left, McLimans gave Michigan its biggest lead of the first half, draining the 3 from the left wing. In the future, opponents will have to prepare to guard both McLimans and Akunne from deep — the duo are a combined 5-for-5 from the outside and 8-for-8 from the field this season.

Tim Hardaway Jr. continues to prove that he’s one of the best players in the conference, if not the nation. After he forced an Iowa State turnover at the top of the key, Hardaway began the one man fast break. He was uncontested the whole way but he brought the crowd to its feet with an emphatic dunk from a step inside the free throw line. The play was part of the 13-2 run mentioned above that fueled Michigan’s momentum headed into half time. More importantly it provided a spark to a relatively lackadaisical Crisler Arena crowd.

Michigan pulled away in the second half, leading by 22 at one point, thanks to efficient scoring inside the arc. Jordan Morgan was the primary reason why Michigan was able to convert so effectively around the hoop. Morgan scored a team-high 12 points in the half and he did it in a myriad of ways – something Michigan fans have been hoping to see more often early on this season. First, Morgan showed he can shoot the 12-foot jumper. Guarded closely by White at the elbow, Morgan scoped out his options, looking to find an open teammate. But once he turned to the basket, he realized White had given him enough room to pull the trigger. Morgan didn’t hesitate and nailed it. Just a minute later, Morgan received the ball near the left block, pump-faked, took one dribble and converted the baby-hook for the bucket and the foul. As an added bonus, he even made the free throw. Later in the half, Morgan converted a couple of nice dishes from Stu Douglass. He finished the first on a nice layup in traffic and the second on a wide-open two-handed slam. Beilein continually stresses the importance of getting buckets inside, and Morgan gave his coach just what he was looking for while helping the Michigan offense make 13 of 14 two point field goals in the second half.

5. Michigan turnovers down the stretch allow Iowa State to creep back into the game

Up 68-50 with 3:30 to go, this one should have been over. But because of some careless turnovers, Michigan allowed Iowa State to crawl back in the game late. With 24 seconds to go, after a Chris Allen step-back 3-pointer, the Cyclones cut what was a 22-point Michigan lead to just six. Morgan, Hardaway, and Smotrycz all turned the ball over at least once down the stretch, and Iowa State dominated the offensive boards. Luckily, Michigan had built up a big enough lead earlier in the game so they could afford to get away with careless play down the stretch. The Wolverines might have escaped this time but have to learn to close out games in a more convincing fashion or they will run into trouble in conference play.