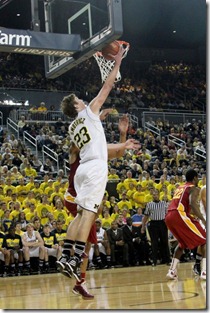 Ken Pomeroy released his first series of individual player statistics for the 2011 season on Sunday afternoon which allows us to dive a little deeper into the performance of notable 2011 Wolverines. The first player we’ll examine is Evan Smotrycz. A large jump in production was expected from Smotrycz this season. At the time he was committed he was the most highly regarded commitment of John Beilein’s tenure, his skillset is a great fit for John Beilein’s offense and he spent the summer adding muscle necessary to compete in the Big Ten.

Smotrycz has shown improvement through eight games but his performances have been far from frustration free. Despite those sometimes maddening moments, he’s on track to improve in almost every statistical category this season.

No one is going to call Smotrycz an imposing force in the paint but there’s no denying that he’s a more aggressive player this season. His turnaround has started inside the arc – the area of the floor he tended to avoid as a freshman. He attempted 61% of his field goals from three point range as a freshman compared to 34% this season. Even more importantly, Smotrycz is making his two pointers at a higher rate this season. He’s been almost twice as effective on both of the offensive and defensive glass and is even blocking more shots than we saw a season ago.

The rebounding stands out as the most encouraging development with Smotrycz’s game. At 6-foot-9, Smotrycz’s freshman rebounding numbers were barely a shade above unacceptable. His defensive rebounding rate as a freshman compared to players like Keith Appling, Alex Marcotullio and Ryne Smith and was markedly lower than guards like Talor Battle, Josh Gaser and Verdell Jones. This year Evan is one of Michigan’s top two rebounders and ranks in the top 10 of eligible Big Ten players in defensive rebounding percentage. Smotrycz has matched or surpassed his freshman year best single game rebound total of seven in three of Michigan’s eight games.

Despite all of the improvements statistically, it has still been maddening to watch Smotrycz play at times this season. One of the primary reasons why is obvious: fouls. Smotrycz has been unable to shake the tendency to pick up ticky tack fouls and it has significantly limited his playing time. He’s being whistled for 6.2 fouls per 40 minutes which is .8 fouls more per 40 than a season ago and the second worst rate among Big Ten players that have played over 40% of their teams minutes this season.

Smotrycz has picked up two first half fouls in three games and averages his first foul call by the second media timeout. He’s only made it to the 15 minute mark in the second half with less than two fouls in one game this season and has fouled out in three of the last four games.

Smotrycz’s foul problems might be compounded by his second problem – his on court demeanor. He’s playing a more physical style of basketball – defensively, on the glass and diving for loose balls – but he still seems to get frustrated too easily. He has the tendency to let bad stretches of play early affect his whole game and is certainly apt to pick up frustration fouls.

Evan’s improvement has been as impressive and tangible as any other player on the Michigan roster but he also hasn’t come close to his potential. Michigan needs him to be a guy that can play 30 minutes per game at the four and five, provide match-up problems, hold his own defensively and score the ball. Those are significant expectations but this offense is dying for a No. 3 scorer and Smotrycz’s skillset fits the bill. As the season progresses, Smotrycz’s production is certain to be a bellwether of Michigan’s success.