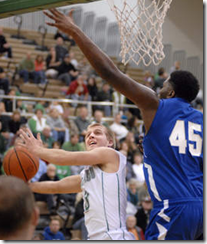 High school basketball hasn’t tipped off in Michigan but that doesn’t mean Wolverine recruiting targets and commitments aren’t playing basketball in other states. Here’s the first edition of our 2011-12 Recruiting Roundup with an in depth look at 2012, 2013 and 2014 commitments and prospects.

Lake Central bounced back from its loss to Hamilton Southeastern and Gary Harris a week ago with an easy win 62-48 win over Valparaiso. It was Lake Central’s first win at Valparaiso since 2003 and Robinson had 16 points and five rebounds despite facing a box-and-one defense all night.

Robinson’s younger brother Galen doesn’t play basketball but has begun to prove himself on the gridirion, he was profiled by the NWI Times.

Brewster returned from Thanksgiving break with a pair of victories, moving its record to 7-0 on the season. McGary had a game high 11 rebounds in a 104-44 win over the Holderness School and had 16 points on 7 of 10 shooting in a 121-51 win over Leadership Prep. Brewster will play Rise Academy tonight and host the Brewster Invitational over the weekend.

St. Mark’s opened its season with a road victory over Hotchkiss, 67-52, and Stauskas had a game high 21 points and 10 rebounds. New England Recruiting Report notes that St. Mark’s is one of the top contenders in the NEPSAC Class AA, calling Stauskas and Tarcewski a “one-two punch that most head coaches can only dream of.”

Hamilton Southeastern picked up a pair of victories to move to 3-0. The Royals knocked off Mt. Vernon, 67-39, and then beat a Pendleton Heights squad led by Butler commitment Kellen Dunham, 71-53. Irvin had 18 points in the win over Mt. Vernon and added 16 in the Pendleton Heights victory.

Irvin and his MSU-bound teammate Gary Harris both earned praise from Pendleton Heights’ head coach for their defensive mettle:

“Irvin and Harris are elite-level defenders,” Pendleton Heights coach Brian Hahn said. “There’s two of them out there. (Kellen) always had a long, athletic, strong, physical defender on him. He took a couple shots where he got impatient, but you’ve got to expect that from a kid. We missed some opportunities to get him the ball and he missed some opportunities to take advantage of situations.

Anthony Wayne went 6-12 a season ago but is already off to a much stronger start this year behind Michigan bound big man Mark Donnal. Donnal’s squad picked up a pair of victories this weekend, knocking off Toledo Christian, 47-36, and Bowling Green, 51-47, for a 2-0 start (stats unavailable in game 2). Donnal had nine points and 11 rebounds versus Toledo Christian and was impressive according to this report from the Toledo Blade:

Donnal made his presence felt near the basket, particularly down the stretch. He finished with 11 rebounds and nine points, including eight points in the second half. An offensive rebound by Donnal and putback — two-had dunk style — early in the fourth quarter gave AW a nine-point advantage, which represented its largest lead up to that point in the game.

Walton’s season hasn’t tipped off but the Detroit News ranks him the No. 7 player in the state of Michigan headed into the season. Michigan target Byron Zeigler is ranked third in the state.

Woodson was impressive at the Hoop Mountain Prep Classic over the weekend as Vermont Academy went 3-0 with wins over Putanm Science Academy (65-59), Manhattan Sports Academy (78-66) and Mont Clare Academy (74-70). The New England Recruiting Report was on hand and was impressed with Woodson, calling him a dominate interior presence on both Day 1 and 2 of the event:

Dominic Woodson dominated the interior for Vermont with 14 points, 11 rebounds and 4 blocks.

Our friend Kevin Farrarhar from FriarBasketball.net was also in attendance on Sunday to watch Woodson play on Saturday and provided this scouting report:

Jesse Bopp has done a terrific job in turning around Vermont Academy in two shorts years – so much so that many in New England think they can challenge traditional NEPSAC Class AA powers Tilton School and St. Mark’s for the class title.  While Tilton and St. Mark’s have an almost unfair advantage with Nerlens Noel and Kaleb Tarczewski, respectively, a big reason why many in New England think Vermont can challenge them is because of the 6’9, 260 pound Woodson, who has the size and toughness to muscle each of them.

Playing high-scoring Mont Clare Academy (PA) on Sunday, Woodson blocked a few shots with authority, dunked much in the same manner, while showing a surprisingly nice touch from the free throw line in a hard-fought win.  His shot selection left something to be desired, as he faced up and took a handful of contested 18 footers (without connecting on one), rather than taking advantage of his size in the paint, but he’s a physical presence who found his way into a few verbal confrontations in the second half.

Woodson is a verbal, active big man with room to grow offensively.  Connecticut’s Kevin Ollie was courtside (prior to the rush of coaches for the South Kent/Tilton tilt) to take in the action.

Keita Bates-Diop: Bates-Diop is one of the most intriguing prospects on Michigan’s 2014 radar with a tantalizing combination of size, potential and athleticism. Bates-Diop, a Michigan visitor and camper, is a secret no more as many Big Ten schools are involved in his recruitment. Here’s a report on his early season play from Illinois Prep Bullseye:

Even though his team suffered a 71-55 loss to Springfield Lanphier, no 2014 prospect at the shootout played any better than 6’7 wing forward Kieta Bates-Diop from Normal U-High in Normal, IL.  Bates-Diop posted a double-double, ending up with 20 points and 11 rebounds.  Simply put, Bates-Diop has enormous up side, as he is highly athletic and has an incredibly long wing span.  In addition, he has great hands, runs the floor, finishes and consistently blocks and alters shots.  He also has the ability to put the ball on the floor and create for himself.

Tyler Ulis: Ulis might have been overshadowed by star power on his Mean Streets AAU team but the minute point guard was one of the stars of the Chicago Heights Classic over Thanksgiving. Ulis had 17 points, six rebounds, five steals and four assists in a win over South Shore, 22 points and eight assists in a win over Thornwood, 29 points, eight assists and four steals in a loss to Homewood-Flossmoor and 20 points in a loss to Hillcrest.

Illinois Prep Bullseye has already singled Ulis out as a class of 2014 player to watch. Here’s a snippet:

Ulis was nothing short of spectacular when we watched him versus Homewood-Flossmoor, scoring 28 points and dishing out 8 assists in a 73-70 loss.  Even though Marian Catholic lost the contest, Ulis controlled the game from start to finish and had a chance to send things into overtime until his 3-point attempt at the buzzer fell short.

Based on what we have seen thus far, we are now on record as saying that we believe Ulis is as good as any point guard in Illinois from the 2014 class, With that having been said, there is no question in our mind that he is a high major prospect and among the top ten prospects in Illinois from 2014.

Ulis is a dynamic ball handler with great vision, quickness and ability to drive and kick.  He also has the ability to consistently shake and bake defenders and despite being undersized he is more than capable of being able to create his shot off the dribble and has 3-point range.

Peyton Allen: Allen has tripped to Michigan multiple times and has been impressive early this season. Here’s a report from Illinois Prep Bullseye:

One thing is for certain when watching 6’4 2014 shooting guard Peyton Allen from Chatham-Glenwood High School in Chatham, IL–he can flat out score.  Allen proved this yet again in Chatham-Glenwood’s 67-53 win over Cahokia, finishing to the tune of 24 points, including a trio of 3-pointers.  Chatham-Glenwood revolves the bulk of its offense around Allen and most of the time he takes full advantage.  Allen has range that extends well beyond the 3-point arc, has good form and a quick release and gets out well on the break.  He still needs to work on sharpening his ball handling skills and ability to take defenders off the dribble, but even so we are a bit surprised that more college offers haven’t come his way as of yet.  His current offers are from Bradley and Oklahoma State, with strong interest continuing to come from plenty of others.

Sean Sellers: 12 points and nine rebounds against Batesville and 26 points versus Lawrenceville.

Trevon Bluiett: Bluiett had just 2 points in a 54-53 loss to Roncalli but was impressive at the State Farm Tournament of Champions in Washington, IL, the week before with an 18 point, 13 rebound performance against College Prep (Mo.), 18 points against Gallatin County (Ill.) and 15 points against Limestone (Ill.).

Grant Evans: Evans 12 points in a 64-44 win over Winchester on Dec. 2 and helped Wapahani to a win over Knightstown, 71-33, but no individual stats were available.

Darius Austin: Michigan has been down to see Austin work out several times and he had 9 points and six rebounds in a loss to Chatham-Glenwood. Here’s a report from Illinois Prep Bullseye:

Austin definitely has the floor game, as he handles the ball well and knows how to find openings in the defense in addition to being able to power his way to the basket. He still needs to show greater consistency with his jump shot, and that is the biggest reason why he still falls on the “tweener” side. With his athleticism and ability to get it done inside, we currently see Austin as an ideal mid-major plus prospect.

Luke Kennard: Kennard scored 26 points to lead all scorers in Franklin’s 69-56 win over Waynesville. This was Kennard’s first high school game and the former Michigan visitors is one of the top freshmen in the state of Ohio.