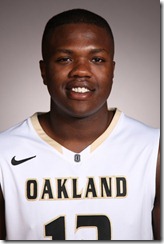 Corey Schmidt is the author of Summit Madness.com, a website devoted to providing quality analysis – quality that fans of some major conferences would dream of! – of the Summit League. Schmidt has been published by Basketball Prospectus, both in print and web, and is a certain worthy of a twitter follow or bookmark. Despite his conference-wide blog, Corey’s roots are with the Oakland Golden Grizzlies and he graciously agreed to answer a few questions about the team that Michigan will face on Saturday afternoon.

It’s not often that a Summit League school loses a player to the NBA Draft, how is Oakland coping without Keith Benson on the roster? Is this a vintage OU team that should compete for the Summit League title?

Not only did Oakland lose Keith Benson to the draft, but it also lost senior Will Hudson to graduation and back-up big man Ilija Milutinovic, who decided to return to his home country to play professionally. Those three were the only big men to log minutes for Oakland in 2010-11, so there was a lot of uncertainty about the frontcourt heading in to 2011-12 since it would consist entirely of newcomers.

Early on, Coach Greg Kampe has been starting a redshirt freshman named Corey Petros at the center position. Petros has said that a year of practicing against Benson and Hudson was the best thing he could have

done to prepare for this role. In a word, he’s been fantastic. He’s been playing 78 percent of the available minutes and posting admirable rebounding rates of 24 percent on the defensive end and 14 percent on the offensive glass. There was an expectation that he’d be solid against Summit League-level competition, but he’s been good even against major conference teams. In matches against Alabama, Arkansas, and Tennessee, Petros has averaged 11.3 rebounds per game. He’s certainly not a go-to option on the offensive end (yet), but he has displayed quality footwork and has a reliable hook shot that enables him to contribute points.

So Petros’s quick development has kept defenses honest in the paint, which is key for a team like Oakland that gets a majority of its offensive production from the guards. This has opened up the perimeter in recent games, where OU has a slew of shooters who can knock down threes. Though they may be a bit undersized (a majority of the time the four players on the court not named Petros top out at 6-foot-5), their attack has been steady enough to boast an efficiency margin of +0.17 through two Summit League games — tops in the league at this early stage of the season. That is most certainly the mark of a team that can contend for the conference crown.

Reggie Hamilton lit up Michigan for 23 points last year, should Michigan fans expect that again? How has Hamilton played this season?

That game featured a brutal shooting performance by Oakland, and in fact Reggie Hamilton was the only OU player to make a three-pointer (he went 6-of-14; the rest of the team, 0-of-17). But the fact that Reggie took 14 three-pointers is a bit alarming, especially since all those shots only generated 23 points. Fortunately for OU fans, that was an outlier performance for an otherwise efficient player. He showcased that efficiency against Tennessee last week by scoring 35 points on 7-of-12 two-point shooting (2-of-5 on threes) and 15-of-15 shooting at the charity stripe. The last two games he’s been in a pass-first mode, which seems to happen when he plays in-conference games. Whatever the case, he’s got a lot of tools and is most effective in my mind when driving to the basket. If he does those things while maintaining control of the ball, Trey Burke will likely find out why Tennessee’s Trae Golden and Texas’ Cory Joseph had such a hard time stopping him from driving to the hoop.

With five players averaging double figures on the Oakland roster, who is the most important player to stop besides Hamilton?

Through eight games the Golden Grizzlies have had four different game-high scorers — with the most repeats going to Hamilton. But just behind him is sophomore shooting guard Travis Bader. Bader made 44 percent of his threes as a freshman, and he made the most three-pointers by any freshman in the nation since Seth Curry’s first campaign at Liberty in 2008-09. So he’s an established shooter from downtown and a player the Wolverines will likely be keying in on.

Former Michigan guard Laval Lucas-Perry is playing 27 minutes per game for the Grizzlies, how has he performed this season?

Lucas-Perry has been a steady player for Oakland, but not necessarily a steady offensive contributor. Coach Greg Kampe noted that he doesn’t care if LLP makes shots because he’s been so happy with his rebounding and defense. I think most Oakland fans would say the same, but it is painful to note that he’s only made 8-of-36 three-pointers (22 percent). Personally, what has enthused me most about his play has been his outrageous ability to get to the free throw line. Yes, his free throw rate (FTA/FGA) of 103 percent is truly worthy of such hyperbole. In raw figures, he’s attempted 61 free throws to 59 field goals. Perhaps he has found his fit in Kampe’s dribble-drive offense. [Editor: He attempted 39 FTs in 32 games during his final year at Michigan]

What went wrong in Oakland’s losses (to Arkansas and Alabama)? If you are game-planning against the Golden Grizzlies what weaknesses do you focus on?

The Golden Grizzlies ran into an elite defense at Alabama and a pretty solid defense at Arkansas (before Marshawn Powell was lost for the season). Those teams prevented them from making shots, plain and simple. Oakland rebounded well and defended decently, but averaged an effective field goal percentage of just 43 percent, which is the biggest reason why they scored just 0.86 points per trip. By comparison, they’re scoring 1.19 points per possession in their six other games (against varying levels of competition). Oakland once again has a potent offense, but a game plan of defending the perimeter and preventing Petros from getting into an offensive rhythm can stunt the attack.

What individual match-ups stand out as most important to you – for both teams?

Trey Burke versus Reggie Hamilton is the highlight match-up in my mind. It will be interesting to see which point guard can better disrupt the other team’s offensive flow. I’m also interested to see who will guard Tim Hardaway Jr. Oakland’s Drew Valentine has primarily been called upon to guard the opposition’s best player, which is usually a wing in the Summit League. Of course, he’ll have to be on his “A” game against a premier talent like Hardaway. I’ll also be curious to see how Coach Beilein game plans against Corey Petros. The Golden Grizzly faithful may differ with me here, but I thought Beilein did a great job of preparing his team to guard Keith Benson last year, which really limited his effectiveness in that game. Petros is just a freshman, but we have yet to see a team really make him uncomfortable. But Beilein and his staff will have had a full seven days between games to breakdown tape on Oakland, and it will be interesting to see how they try to expose Petros, since we really haven’t seen it happen yet.

Let’s hear your prediction. Does Oakland upset Michigan at the Palace on Saturday? Why or why not?

As I mentioned above, it should spook Oakland fans to know that Beilein and company have seven days off to prepare for this game. That’s an eternity for a coach as smart as Beilein. I won’t make a definitive prediction as that’s not my thing, but it would not come as a surprise if the Wolverines execute a solid game plan that exposes some of the Golden Grizzlies’ weaknesses. After all, Michigan did it last year in holding an Oakland team that averaged 85.5 points/game (1.14 points/possession) to just 51 total points (0.70 points per possession), by far the team’s lowest mark in both statistical categories in all of 2010-11.