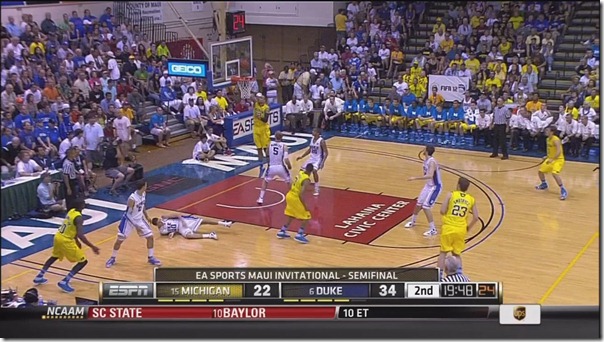 I hope all is well everyone! I have the pleasure of introducing a new feature on UMHoops called Inside the Play. In this segment, we will take a hard look at the x’s and o’s behind Michigan basketball – analyzing schemes, scenarios, and play calls that take place during a game.

Since my playing days, Coach Beilein’s offensive scheme has changed quite a bit. The framework is still the same; however, the emphasis on the pick and roll has increased significantly. Michigan now uses several special play calls that immediately place Michigan’s guards into pick and roll action from the start of the play. With Michigan’s shooters spreading the floor, it’s difficult for defenses to decide what options they should take away. Defenses are also at a loss because Trey Burke has been dynamite as a freshman point guard, already grasping how to effectively run a pick and roll. We are going to look at a couple scenarios from this season, focusing on the following:

Before we get started, I do want to say that I don’t necessarily know exactly what philosophy is behind a coach or player’s actions when analyzing these plays. For instance, some coaches like to help off shooters on a strong side drive – others don’t. So I’ll do my best; however, in some cases I may be wrong analyzing the film because I’m not in their locker rooms, nor do I truly know their scouting reports.

Pick and Roll vs. Memphis

High Side
This play starts out with Barton from Memphis heating up Trey Burke as he is dribbling. Trey, as a result, calls for Jon Horford to give him a screen, however, Barton then jumps high side so Trey can’t use the screen and get to the middle of the floor. So what does Jon Horford do? He changes the direction of the screen.

Hard Hedge
As Witherspoon jumps out to hedge, Trey Burke puts on the brakes and changes direction with a between the legs dribble. All within a split of a second. This makes the play right here. The change of direction gives him another screen but also has his defender back up and lose attachment.

All Trey has to do now is get to the outside of Barton’s left leg and he will get in the lane. He does that. Now let’s break down the decision making that takes place from here.

Staying at Home
This is the beauty of having shooters on the floor. What was a weak side play for the players on the right side of the floor is now strong side because Trey Burke has gotten around the screen and defender. But what do Thomas and Crawford do for Memphis? They stay with Zack Novak and Evan Smotcryz. The strategy: take away the shooters and let Michigan beat us from 2.

They probably didn’t know Trey Burke was this good. Burke reads this perfectly as he sees that Witherspoon is staying with Horford, in addition to Will Barton staying with Tim Hardaway in the left corner. Burke jump stops on two feet, which is so important because it gives him balance and control, then he lets it go and nails a ten foot floater. Easy 2 points.

He did everything right here.

Pick and Roll vs. Duke

Center of the Floor
So now we jump to the Duke game. The main difference with the start of this play is that Jordan Morgan is setting the screen in the middle of the floor and Trey Burke is dribbling to his left.

Contain and Stay in Front
There’s also a difference here with how Duke guards Trey off the screen. As you can see, when the screen occurs, Mason Plumlee sags back and plays more of a containing style defense. Plumlee’s job is to stay between Burke and the basket, keeping an eye on Morgan until Seth Curry can recover back. But Trey does something that many seniors struggle to do.

Staying at Home
Trey keeps his dribble alive and he doesn’t pick up the ball until he knows the play he wants to make. As he gets closer to the box, Andre Dawkins appears to be coming down and helping on Jordan Morgan as he rolls to the basket. But this is simply a stunt in recover, as Duke is also staying with Michigan’s 3 point shooters on the perimeter. So what does Trey do? He waits until the stunt, pump fakes, and finds Morgan at the basket as Plumlee jumps in the air.

Conclusion: Trey Burke is already making veteran decisions off the pick and roll. But you can also already see how many teams will play Michigan defensively this year. They will try to take away the 3 by staying with shooters and not helping off pick and roll or driving action. Throughout the season, I believe Trey will have to continue to make these quick decisions to get Michigan some easy buckets at the basket.

Thanks guys! Stay tuned for more throughout the year. Oh, and if you haven’t checked out my new blog – Goodness Determined – what have you been waiting on? Content is updated every day and you can follow the blog to learn about what’s coming next for IMU.