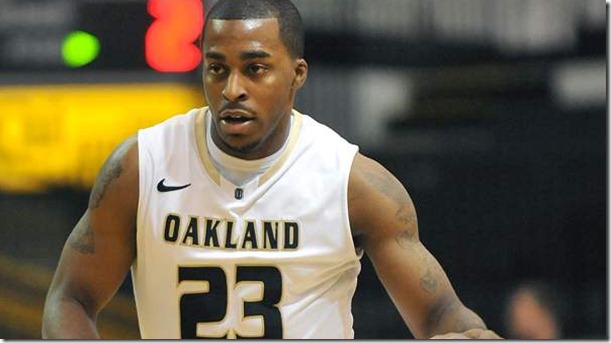 In what will likely be its toughest challenge before Big Ten play, Michigan travels to the Palace of Auburn Hills on Saturday to face the Oakland Golden Grizzlies. Greg Kampe’s program seems to improve every year and looks to be the favorite in the Summit League despite losing Keith Benson to the NBA. The Grizzlies have been up and down this season, most recently dropping a game to Ohio, but always prioritize their match-ups versus in-state foes. Last season, Oakland came up a basket short of upsetting Michigan State at the Palace.

The first thing that stands out when examining Oakland is that the Golden Grizzlies want to run. They want to push the tempo and they want to score, defending is clearly a level or two down the to-do list. Oakland is the fifth fastest team in the country and averages 74 possessions per game; that’s 10 more possessions per game than Michigan, which ranks 315th in pace. The Oakland offense has hummed along pretty efficiently this season but has ran into its fair share of hiccups, most notably early season struggles at Alabama and Arkansas.

The Grizzlies are fairly perimeter oriented, attempting 39 percent of their field goals from three point range, but are actually more effective when attacking the basket. Oakland connects on just 30 percent of its three point attempts compared to 53 percent of its twos. Most importantly, the Golden Grizzlies can get to the free throw line (FTA/FGA = 40%) and hold their own on the offensive glass (OR Rate = 35%), two traits that are uncommon for offenses which attempts that many three pointers. Despite the uptempo style of play, Oakland is relatively sound fundamentally – making free throws (77%) and valuing the basketball (18% turnover rate).

It’s on the defensive end of the court where the Oakland statistical profile begins to deteriorate. The Grizzlies lost one of the nations premiere shot blockers in Keith Benson and their interior defense has faltered. Not only are the blocked shots gone, opponents are finishing around the basket with ease – making 52% of their twos. Oakland does a decent job of cleaning up the defensive glass, defending the three, and preventing free throws but the proficient two point shooting and lack of forced turnovers scream of a passive defense. Ken Pomeroy ranks Oakland’s defense 259th nationally and this is a defense that Michigan should be able to score against effectively.

Reggie Hamilton takes 30% of Oakland’s shots and leads the Grizzlies with 20 points and four assists per game. His shooting numbers are very average – 48% on twos, 29% on threes – but he gets to the line often (52% FTA/FGA) and makes 91% of his freebies. 6-foot-9, 243 pound, redshirt freshman Corey Petros anchors the middle and averages 12 points and 12 rebounds per game, he’s also the only player over 6-foot-6 in the Oakland rotation. Travis Bader is the resident sniper, attempting over 70 percent of his shots from three point range and connecting at a 38 percent clip. Drew Valentine appears to play big minutes as an undersized four, averaging 12 points and seven rebounds per game while serving as one of Oakland’s better perimeter defenders.

There’s also former Wolverine Laval Lucas-Perry, who serves as Greg Kampe’s sixth man. Lucas-Perry played 58 games in a Michigan uniform before being dismissed and has apparently transformed his game in an Oakland uniform. He’s shooting just 25 percent from three point range but is getting to the free throw line at a dramatic rate — attempting 63 free throws to just 65 field goals. He’s already attempted more free throws in nine games this season than he did in either year in a Michigan uniform. Kampe doesn’t have a deep rotation with the bench playing just 20 percent of the available minutes (336th nationally), most of which are taken by Lucas-Perry.

Michigan has played Oakland three times in the last four seasons and won all three contests relatively easily. The Wolverine offense was nearly unstoppable in the first two games but it was Michigan’s defense that stifled Oakland at Crisler Arena a season ago. Oakland is a good match-up for this Michigan team. Oakland’s defensive profile is eerily similar to the Iowa State team that the Wolverines just dismantled around the basket.  Whether the three point shot opens things up on the interior or vice versa, Michigan should have success scoring the ball around the basket in this one. The Grizzlies offense will likely put up a stronger performance than a year ago at Crisler (their worst of the season) but Michigan should have the fire power to keep pace.

Pomeroy likes Michigan in a 69 possession game, giving the Wolverines a 76% chance of victory and predicting an 81-72 final score. Let’s hear your thoughts, predictions and more in the comments below.