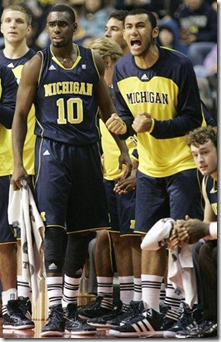 Michigan beat Oakland, 90-80, at the Palace on Saturday afternoon but had to do it on Oakland’s terms. John Beilein’s teams have been easy to define: they play at a slow tempo, limit turnovers, rarely foul, and attempt more than their fair share of three pointers. There was only one element of Beilein-ball in this game – three point shooting. Oakland controlled the tempo, forced turnovers, and got to the free throw line so effectively that with a little over ten minutes to play the Grizzlies had a very real chance of achieving the monumental upset that they so badly crave. The Wolverines were too much in the end, escaping the Palace with a ten point win on the back of clutch performances from Trey Burke, Evan Smotrycz and Tim Hardaway Jr.

It’s a struggle to find a Michigan performance that compares to this game under John Beilein. Michigan turned the ball over on nearly a quarter of its possessions and many of them were unforced. Burke (6) and Hardaway (4) were the primary culprits but Michigan’s less frequent ball handlers were equally culpaple, coughing the ball up seven times combined. It was Michigan’s shooting that won this game. The Wolverines connected on 62% of their twos and 54% of their threes for an effective field goal percentage of 71.3% that’s been matched in only two games under John Beilein (Iowa ‘10-11, Purdue ‘09-10). Simply put, it’s tough to lose games when you shoot the ball that well.

Michigan’s defense was far from flawless. The two greatest struggles for the Wolverine defense were keeping Oakland off the free throw line – 57% free throw rate (FTA/FGA) – and slowing down the Grizzlies in transition, especially off of made baskets. In the half court, Michigan did a decent job of challenging Oakland shots as the Grizzlies converted 47% of their twos and 38% of their threes for a 51% effective field goal percentage. Michigan’s defense excelled on the defensive glass against the smaller Oakland front line, rebounding over 80% of Oakland’s missed shots on the evening.

John Beilein knew this game was going to be a battle and he received every bit of the challenge that he expected. Michigan’s performance was far from perfect but it was able to ride strong individual performances from Trey Burke (career high), Evan Smtorycz (career high) and Tim Hardaway Jr. who all poured in 20 points or more.