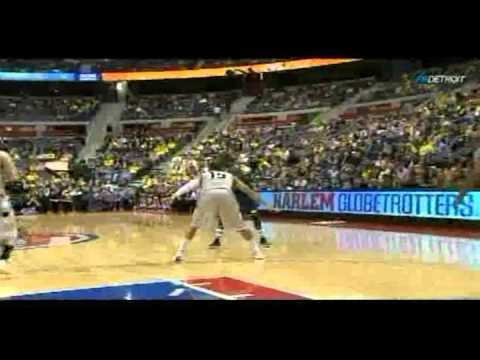 1. Evan Smotrycz’s back-door cut and 3-pointer in first half

At the press conference after the game on Saturday, Oakland coach Greg Kampe said the Grizzlies’ game plan was to limit the back-door cuts and make the Wolverines beat them from behind the arc. In this two-play sequence, Evan Smotrycz beat them in both ways. First, off a screen at the top of the key from Jordan Morgan, Smotrycz slipped in front of Laval Lucas-Perry and was wide open under the bucket for an easy left-handed layup. On the next possession, Smotrycz was wide open again, but this time from deep. And he made Oakland pay, capping a 10-0 Michigan run and giving the Wolverines an early 15-4 lead. After the game, John Beilein said this was probably the best game of Smotrycz’s career (20 points, 9 rebounds) and his ability to score in several different ways as he did here was one of the big reasons why he was so successful.

Oakland isn’t too bad at the back door cut either. This finish by Lucas-Perry was so smooth that it made it on Sportscenter’s Top 10 plays. It was part of an 8-2 Oakland run to end the half, sparked by a couple careless Michigan turnovers and poor shot selection. Sharp-shooter Travis Bader played a big role too, hitting two free throws and then a buzzer beater 3-pointer to end the half and disintegrating what was once a 12-point Michigan lead to zero heading into the break. This run was much more about Michigan struggling to execute rather than Oakland doing anything unusual. The Wolverines scored just three points in the final three minutes of the half and had four turnovers in the final five minutes.

3. Three pointers turn a tie game into an 11-point Michigan lead in a span of 3 minutes

Kampe said Michigan would have to beat his team from deep if the Wolverines were going to win. They did. Nothing exemplified that fact more than this 3-minute second half stretch in which Trey Burke, Tim Hardaway and Stu Douglass all hit threes to turn a tie game into an 11-point Michigan lead in just about three minutes of clock time. Burke and Hardaway both had two 3-pointers in the stretch – a couple of which were very deep. It was also great to see Douglass snap out of his shooting slump with a great catch and knock down off of Burke’s penetration. Michigan finished the game with a season-high 15 3-pointers and 54% three point shooting. Michigan’s long range attack was no doubt the biggest factor in the Michigan win.

After Burke received his fourth foul, Michigan still had a fairly comfortable 10-point lead with about five and a half minutes to play. Michigan’s problem was that Novak was also on the bench with four fouls, meaning Eso Akunne would have to play clutch minutes in the backcourt next to Stu Douglass. As well as he has played earlier this season, Akunne struggled. He was sloppy with the ball and created an Oakland fast break which resulted in two free throws for Reggie Hamilton. Just over a minute later, Lucas-Perry had a wide-open look at a 3-pointer that would’ve cut Michigan’s lead to just four. The ball rattled in and out and Douglass corralled the rebound. If Lucas-Perry’s shot falls, the game is up in the air. Instead, Michigan has the chance to get Burke back in the game for the next offensive possession.

5. Hardaway’s three and Douglass’s dunk stretches the lead to 12 and seals the game

With Burke back on the floor, Michigan had the opportunity to make a play. Burke sets up the Michigan offense while weaving his way between a couple screens from Morgan and Smotrycz. Probing the defense, Burke eventually finds a path into the lane, drawing the attention of almost every Oakland player at one time or another. Once he’s in the lane he somehow finds a way to flip the ball to Tim Hardaway Jr. on the baseline. Hardaway buries the three, stretching Michigan’s lead to 10 with under four minutes to play. On the next defensive possession, Smotrycz makes a great play by moving his feet and ripping the ball from Valentine. Smotrycz pushes the ball ahead to Douglass who tacks on the exclamation point – a two handed jam that resurrected memories of Michigan’s NCAA Tournament win over Tennessee.