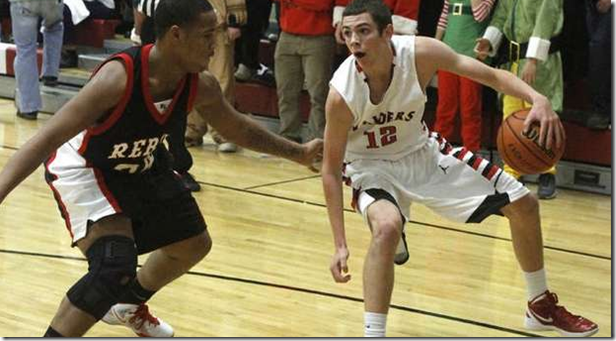 High school basketball is rounding into full swing just before the holidays and we have compiled updates, videos and pictures of Michigan’s commitments and recruiting targets in the 2012, 2013 and 2014 classes. Find the latest on Mitch McGary (with video), Derrick Walton’s triple double, Mark Donnal’s 36 point performance, Nick Stauskas’s strong start, Michigan coaches watching a new 2014 target and much more after the jump.

Video from Ballas TV
McGary had 10 points and 11 rebounds on Friday in a win over MCI but the featured game was against Tilton on Friday. The battle of New England prep powerhouses lived up to its billing and our friend Kevin Farrahar was on hand to watch. Farrahar posted detailed report on his website, FriarBasketball.net, but also provided us with a report focused on McGary, who had 11 points.

In a matchup of two of the most talented prep teams in the country, Mitch McGary and Brewster raced out to a 41-19 lead over Nerlens Noel’s Tilton squad before winning in overtime.  It was a steady, yet unspectacular, afternoon for the Michigan commit who grabbed nine rebounds and scored 11 before fouling out near the end of regulation.

McGary was relatively quiet in the first half, knocking down a pair of jumpers with Brewster already up 20, but he made a two key baskets early in the second half to quell a Tilton run. Tilton closed the first half on a 13-2 run, and McGary came out of the locker room and scored over Noel to push the lead back to double digits on the first possession of the second half.  At the 15:56 mark he scored and was fouled, connecting on the free throw to push the advantage to 50-36.

Overall, it was a quiet night for McGary, as Tilton transition to a zone defense, funneling all of the action towards Noel, and Brewster didn’t have many answers – scoring only 11 points over the final ten minutes of regulation.  His teammates carried the load, as NC State commit TJ Warren had 30 for Brewster, Jakarr Sampson added 18, while Xavier-commit, and underrated point guard, Semaj Christon controlled the tempo – scoring 15 points and dishing out 10 assists. Brewster entered the game winning by an average margin of victory of over 30 points per game and improves to 10-0.  Tilton and Brewster will play on ESPN on January 15.

St. Mark’s cruised to a 4-0 record with wins over BB&N, 58-25, Brimmer and May, 72-53, and Hamden Hall, 75-53. Stauskas led the team in scoring in the most recent games this weekend notching 22 points on Friday versus Brimmer & May and 19 versus Hamden Hall. St. Mark’s has a big time match-up on the docket this week against Tilton.

Stauskas also got some love from his coach in an article on Boston.com:

Dave Lubick calls Stauskas, from Mississauga, Ontario, “the best player, in terms of skill set, to ever come to St. Mark’s.’’ At 6-6, he’s a talented all-round player, feared most for his jump shot.

“I think as long as we play our game this year and everyone stays healthy, I think we have a chance of winning a championship against Tilton this year,’’ Stauskas said. “I know that’s everyone’s goal on this team.’’

Lake Central moved to 3-1 with a 62-48 win over Crown Point on Friday night. Robinson had a game high 21 points and added seven rebounds.

Donnal put together a monster performance against Bowling Green over the weekend, scoring 36 points on 13 of 15 shooting. We already posted a scouting video and report but one of our readers, Mason Lowry, was in attendance and provided a detailed report as well:

I’ll say it. This kid’s really good. How’s this for an offensive stat line: 36 points, 13-15 from the field, 8-11 from the line. Efficiency! He opened the game by throwing down an alley-oop dunk about four seconds in, and that kind of set the tone for the rest of the night. He’s got a great jumper that he can knock down from all over. He hit two threes and several more with a toe on the line. Got a nice little jump hook, too, that he hit a few of. His best individual play, though, was a fadeaway at the third quarter buzzer, a la Larry Bird, that was just perfect. Looked totally unafraid of contact, which is something that can be difficult for a guy of his size and talent in high school to be. He impacted the game defensively, too, blocking shots and crashing the glass for ten rebounds. I came away really impressed with him.

What I liked most about it was that he did it against a guy in Vitto Brown, who at 6’7, is a legit post prospect who has offers from the Ohio MAC schools plus Boston U. It’s one thing to put up gaudy numbers against teams who are going to throw 5’11 guys at him, but he did a good chunk of it against a DI player.

The Toledo area is packed with really talented post players in his class, including Mark Loving (OSU commit), Nigel Hayes (an ESPN top 100 guy and a teammate of UM football commit Chris Wormley) and Jackson Lamb (a one-time Michigan target), but on this performance, Donnal might be the best of them all.

UConn was in to watch Woodson over the weekend and the big man continues to impress.

Okonoboh had seven points and five rebounds in Tilton’s loss to Brewster Academy. He was also recently scouted by DraftExpress’s Jonathan Givony, an excerpt:

The cousin of UConn junior Alex Oriakhi, Okonoboh has improved his frame considerably since we first saw him, and will surely continue to fill out as he matures physically. He’s got long arms and very good athleticism, running the floor well and playing above the rim on a consistent basis.

Not afraid to do the dirty work, Okonoboh will have no problem being a role player at the college level, as that’s exactly what he’s been his entire career thus far. He shows a solid feel for the game, a good attitude and excellent fundamentals, leaving plenty of room for optimism regarding his future.

Okonoboh isn’t particularly skilled or assertive offensively at this stage. His footwork is fairly limited inside the paint, and he shows very little overall polish, but he did drop some glimpses of being able to knock down a mid-range jumper or attack his man off the dribble. He’s at his best finishing plays at the rim at the moment, and does so very efficiently, not straying outside his comfort level very often.

Byron Zeigler: Zeigler’s team cruised to a 53 point victory and the junior wing was at Assembly Hall for Indiana’s thrilling win over Kentucky.

Keita Bates-Diop: Bates-Diop had 21 points on 9 of 15 shooting in a 52-42 win over Eureka on Friday. He added eight points and six rebounds in a 62-36 win over Mahomet Seymour.

Peyton Allen: Peyton Allen had 15 points in a 49-47 loss to to the Troy Triad Knights as Glenwood fell to 6-1. Allen also visited Illinois on Sunday to watch the Illini take on Coppin State.

Trevon Bluiett: Bluiett had 17 points on Friday in a 63-36 win over Beech Grove and added 15 on Saturday in a 75-42 win over Covenant Christian.

Grant Evans: Evans (dribbling above) had 18 points in Wapahani’s win over Southside including eight in the first quarter.

Darius Austin: Austin had 16 points, five rebounds and three blocks in a win over Centralia.

Luke Kennard: The talented freshman is proving himself early with another 20+ point performance. Kennard had 22 points in an easy win over Monroe including 18 in the first half.