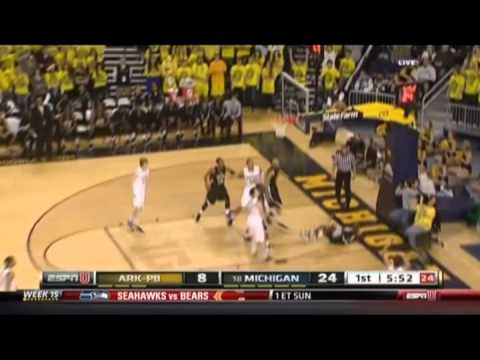 1. Jordan Morgan’s block and put-back on the other end

Jordan Morgan didn’t have a huge game but he was aggressive and assertive during this stretch. First, Morgan has a monster block, sending the Pine Bluff shot into the seats. One of the ESPN announcers posed a valid question, asking if you can block a shot like this, why can’t you keep it in bounds? He may have a point, but in a 24-8 game, a block like this did a good job of sending Morgan’s message. Aggressiveness. This is the attitude that Michigan fans want to see out of Morgan and he continued that play on the offensive end as well. Under a minute later, Morgan got into the action on the offensive end, out hustling three Pine Bluff defenders for an offensive rebound and finishing with a nice baby hook. Morgan should dominate games like this and for stretches in this one he was impressive. It was also great to see Morgan finish quickly and effectively after an offensive rebound as we’ve seen him struggle in this situation from time to time this year.

It’s tough to complain about a 19-0 run and this one was every bit as fun as you’d expect. The run started with Evan Smotrycz, who put together a nice performance (10 points, 5 rebounds) for the second game in a row. Smotrycz’s three-pointer with 15:55 gave the Wolverines a lead they would not relinquish for the rest of the game. Burke, Tim Hardaway Jr. and Stu Douglass all add to the run, and it was capped by a nice put-back by Matt Vogrich, which may have been the most important play of them all. Vogrich, who had made just one three-pointer this season coming into this game, finally got hot in the second half. The put-back just may have been the confidence boost he needed to get going.

3.Trey Burke’s 3 at the end of the half, set up by Blake McLiman’s screen

There’s a couple things to watch on this play. First, the beautiful screen by Blake McLimans at mid-court. McLimans just levels the UAPB player, sending him straight to the floor in a daze, with a completely legal screen. McLimans is in perfect position and his feet are set. From there, Burke did the rest. He pulled up just outside the three-point line, hung in the air, and fired up the three. He drained it, giving Michigan a 37-17 lead heading into the break. Not that Michigan needed confidence to put them over the edge, but this is a play that could come in handy in a close conference game in the future.

In one game, Vogrich’s three point shooting percentage went from 7.7 percent to 22 percent. Vogrich ended the game 3-for-5 from deep, making his first 3-pointer since his one and only made-three point bucket this year, which he made nearly a month ago in a Nov. 17 victory over Western Illinois. Vogrich has proven that once he gets hot, he can make shots in a hurry. For the first time this season, he reminded us of that fact and found a convert zone. Hopefully that confidence will carry over to the Big Ten season, which is just over two weeks away.

5. Tim Hardaway Jr. shows he’s OK in the second half

In a game like this, maybe more than anything you want your players to stay healthy. Michigan had a big scare late in the first half, when Tim Hardaway bit on a pump-fake and went flying into the air. Hardaway came down hard, landing right on his back. For about 10 seconds, Hardaway lay on the floor barely moving. Finally, he got up under his own power and headed to the bench — Crisler Arena exhaled. Fortunately, he seemed to be okay in the second half. He started the second half, hit a three in his first shift and had a couple shifts. After the game, John Beilein said Hardaway probably just has a pretty big bruise on his tail bone but shouldn’t miss any time for it. Disaster averted.