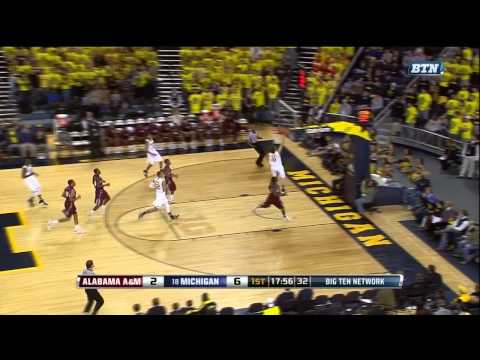 Any doubts of Michigan coming out flat in what should be another easy win were squandered early in this one. After Alabama A&M scored the first bucket of the game, the Wolverines went on a 13-0 run to take a commanding lead and never really looked back. Burke started the run with a three from the top of the key, and Evan Smotrycz followed with a three of his own from the corner off a nice pass from Zack Novak — Smotrycz and Burke were a combined six of six from three in this one. Novak soon got into the scoring action, hitting a layup in transition. Tim Hardaway Jr. added a three, and Jordan Morgan capped the run with an alley-oop layup off another great look from Novak. From then on the game was never really in doubt, which is exactly the type of performance John Beilein was looking for.

Carlton Brundidge has seen a whole lot of bench through the first ten games of the season. Coming into Saturday’s matchup, he had yet to see any type of significant playing time, even in Michigan’s easier wins so far this season. Finally, Michigan fans got to see a little bit of what Brundidge can do on the floor as he played 13 minutes against Alabama A&M,. Toward the end of the first half, the Southfield native hit his first career field goal. In transition, Brundidge received the ball on the left side of the lane, took one dribble and finished a nifty reverse lay up on the right side of the bucket. He finished the game with three points, two rebounds and an assist. After the game, Beilein said he’d love to get Trey Burke five minutes of rest each half, and Brundidge is a candidate to take some of those minutes. There are two keys if Brundidge wants to earn more minutes: play more disciplined defense and value the basketball.

Akunne provided Michigan with a big boost in a couple of early games this season but had struggled a bit lately. He had a few costly turnovers against Oakland and didn’t do much with his playing time against Arkansas Pine Bluff. Akunne fell behind Brundidge in the rotation for this on, not seeing much playing time until very late, but he made the most of his opportunities. Akunne played just two minutes on Saturday, but managed to knock down a tough jumper off the dribble and a three from the top of the key. There’s a good chance Michigan will need some production out of Akunne again at some point during conference play, and it’s plays like this that show Akunne has what it takes to get it done. His shooting this year continues to be impressive: seven for eight and four of five on three point shots.

4. Zack Novak’s buckets in transition, off the dribble and from mid range

This is not the same Zack Novak that we’ve seen for the past three seasons. The leadership, rebounding and three point shooting (43%) are still there but he’s a more complete player. He’s finding many more opportunities at the off guard and he’s making them count. These three plays are a great example of how Novak has diversified his game. On the first play, Novak sees a seam in the defense and takes it hard to the hole by himself, finishing nicely on the left side. The next, he finishes in transition on a thunderous two-handed dunk, bringing the crowd to its feet. But the final of these three plays is the biggest difference in his offensive game – the ability to hit the mid range jumper. Off a screen from Blake McLimans, Novak finds just a hair of daylight at the top of the key, pulls up and drains the jumper. In years past, Novak has been limited almost solely to the three-pointer. This year, not only is he hitting the mid-range jumper, but he’s hitting it in transition, off the dribble, and with his feet set.

With Jon Horford currently out with a stress injury in his right foot, somebody’s going to have to step up at the five position. Jordan Morgan is the starter and, without Horford, McLimans is only true option to back him up. Smotrycz is capable of sliding over but Michigan would love find some production from McLimans. McLimans has shown flashes of potential and he had some positive moments in the first half on Saturday, tallying two points, four rebounds and a block, all seen here in this clip. After the game, Beilein said he’s been encouraged by McLimans’s play, but he wants to see him play more like a true five rather than float on the perimeter – and to start to rebound beyond his area. With Morgan’s tendency to pick up fouls, and Horford’s injury (there is currently no timetable on his return), McLimans will have to find a way to play tough inside if he’s going to make a positive impact heading toward Big Ten play.