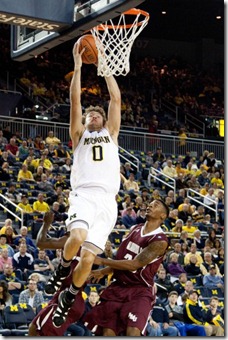 Forget about the fact that Evan Smotrycz is making over half his threes, getting to the line more than twice as often as a season ago and improved his two point shooting percentage by 14 percent. It’s Smotrycz’s improvement on the glass that has been truly astounding.

Calling Smotrycz’’s rebounding numbers a year ago “underwhelming” would be kind. They were disdainful for a player that stands 6-foot-9. The same Evan Smotrycz that rebounded like a guard a season ago is suddenly the second best defensive rebounder in the Big Ten.

Perhaps the numbers are a mirage spawned by strong rebounding performances against subpar competition on the schedule, but Michigan isn’t the only Big Ten team to indulge in a cupcake or two. Much was made of Smotrycz’s off season weight gain regimen and it appears to be paying dividends thus far.

We’ve emphasized Zack Novak’s dramatic improvements quite a bit over the first two months of the season. The once one dimensional shooter – 72% of his field goal attempts throughout his first three seasons were from three point range – is suddenly comfortable scoring the ball inside the three point line. Novak has attempted a much reduced 55% of his shots from three point ranage this year and converted at 65%, a dramatic increase from his 38% two point shooting percentage a year ago.

He’s still making his threes (43 percent on the year) and has increased his assist percentage to boot. The result is the most efficient offensive player in the Big Ten and 12th best in the country.

Unfortunately Novak uses just 13 percent of Michigan’s possessions while he’s on the floor. Despite being the most efficient player on the roster, only one Michigan player in the top 9 (McLimans) uses a lower percentage the team’s possessions while he’s on the floor. Regression toward the mean tells us that Novak’s efficiency numbers should decrease as he becomes more involved in the offense. Logic tells us that by picking his spots he’s never forced to take bad shots which drag his numbers down. But at the end of the day, Novak is going to be on the floor for 35 minutes every game and it might be time to find more ways to get Novak involved in the offense.

Life in the NBA: Darius Morris and Manny Harris

Surviving on the bottom third of an NBA roster isn’t easy and that’s a battle that two former Wolverines find themselves in during abbreviated NBA training camps.

It’s believed he suffered the burn while sitting in a cooling chamber, a new-age alternative to ice baths. The machines are supposed to help in speeding the healing process for injuries. Harris said he’s not sure how the mishap occurred.

“I am confident in my ability to play,” Harris said. “I just need to be on the floor.”

The Cavs’ final roster spot is expected to come down to Manny Harris or Mychel Thompson and some believe Harris might still have the upper hand despite not practicing during the preseason.

Darius Morris officially began his NBA career on Monday night during the Los Angeles Lakers first preseason game against the Clippers. Morris was the first player off the bench and scored 11 points on 5 of 9 shooting and dished out three assists to two turnovers in 24 minutes including a first quarter buzzer beater. In the NBA, you get your own highlight videos for preseason games:

It’s great to see Morris getting off to a hot start and, if Monday night is any indication, it certainly appears that he could earn some playing time this year for the Lakers.

It was easy to think Michigan would take a step back without Darius Morris. But what we never know and what remains an unpredictable venture is projecting just how much of an impact freshmen will make on a roster. Well, Trey Burke has been a stud for the Wolverines and has allowed Tim Hardaway Jr. even more freedom. Burke scored 19 points, dished out four assists and made all four free throws against Alabama A&M. When everything is clicking, this Michigan offense is so much fun to watch.