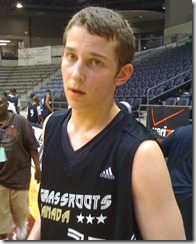 We posted a number of scouting features and recruiting videos over the last 72 hours but here’s our traditional weekly recruiting roundup. The Recruiting Roundup features updates on all of Michigan’s class of 2012 and 2013 commitments as well as other notable targets on the Wolverine recruiting board.

St. Mark’s split a pair of games at the St. Andrew’s Holiday Classic. They lost to the nation’s No. 5 team, Tilton, on Friday by a score of 71-55 but bounced back with a big win over Vermont Academy. Stauskas was a bit inconsistent versus Tilton but was impressive versus Vermont Academy.

Stauskas finished with 15 points in the loss and had an up and down game:

Michigan-commit Nikolas Stauskas never really seemed to be able to get into a rhythm in this one. He knocked down a couple threes and made some nice dribble-drive moves that undoubtedly warrant him being a top 100 player, but was stripped on several occasions by Tilton’s tough defense.

Stauskas was instrumental in helping St. Mark’s bounce back with a big win over Vermont Academy, scoring 19 points. The New England Recruiting Report was impressed:

While Nik Stauskas may have struggled to find a rhythm in St. Mark’s first game against Tilton, he certainly didn’t have that problem against Vermont. His renowned three-point jumper was automatic, but more importantly he continues to show that he is much more than just a shooter; he penetrated and got to the rim constantly on his way to 19 points and used his athleticism to his advantage to pull down several tough rebounds

St. Mark’s is 6-1 on the season and will resume play after Christmas in Raleigh, NC for the GLAXO Holiday Invitational.

Robinson’s Lake Central team received all it could handle on Friday night in an overtime win over Merrillville. Robinson led the Indians in the comeback, they trailed by 11 with just over seven minutes to play, by scoring 15 of his game high 22 points late in the fourth quarter.

Brewster Academy was off last week after a pair of games were cancelled. We posted highlights from Brewster’s showdown with Tilton last week but you can also watch the full game (broken into clips) here. Brewster will resume play after the holidays with a home game versus Evan Smotrycz’s former school, New Hampton.

Walton had 19 points in a win over Ann Arbor Skyline and our own Kevin Raftery was on the scene. Make sure you watch video of Walton in action and check out our detailed scouting report.

Irvin had 18 points and a game high nine rebounds in a Hamilton Southeastern win over Zionsville. He also added had 17 points, including four three pointers and five rebounds in a loss to Indiana No. 2 North Central.

Donnal had 16 points in a win over Northview on Tuesday – full video and scouting report – and added 22 points in another Anthony Wayne win on Saturday over Springfield.

Goodluck Okonoboh: Michigan coaches were on hand at the City of Palms Classic to watch Okonoboh and Tilton play in a blowout win over Friends Central.

Byron Zeigler: Zeigler had seven points and 10 rebounds in a 72-68 loss to Romulus on Friday, Kevin was there scouting.

Keita Bates-Diop: Bates-Diop has been excelling early this season, the most recent school to turn up interest is Missouri, and was featured by the local news as an athlete of the week (highlights included):
<

Tyler Wideman: Wideman finished with 12 points, nine rebounds and five blocks in win over Merrillville and also had 13 points in a Tuesday win over Chesterton in front of Matt Painter.

Jamal Poplar: Poplar had 21 points, eight rebounds and three blocks in a loss to Detroit Allen, earning praise from his coach: “He’s giving us what we need every night,” Woods said. “He’s very consistent. I have to now find other guys to be consistent to go along with that.”

Trevon Bluiett: Bluiett had 16 points in a 87-60 win at Triton Central on Saturday. Joe Eberhardt also posted a scouting report and video from Bluiett’s recent game versus Covenant Christian.

Sean Sellers & Bryant McIntosh: Greensburg rolled to a pair of victories over Franklin Co. and Jennings Co., moving their record to 7-0, but stats are unavailable.

Perry Poindexter: Poindexter added points and three rebounds in a 81-76 win over Hamilton Southeastern on Dec. 17.

Luke Kennard: Kennard is arguably the top freshman in the state of Ohio and is averaging nearly 20 points per game this season. He hit a snag in a win over Bellbrook, hitting just a pair of shots, but “did lead Franklin in floor dives, fist pumps and nifty passes.” Kennard already has a verbal offer from Dayton and has previously visited Michigan.

Note: Don’t hesitate to pass along articles, scores or other tidbits to dylan@umhoops.com. Just because a player is not listed doesn’t mean anything other than we couldn’t find a significant update for the week.