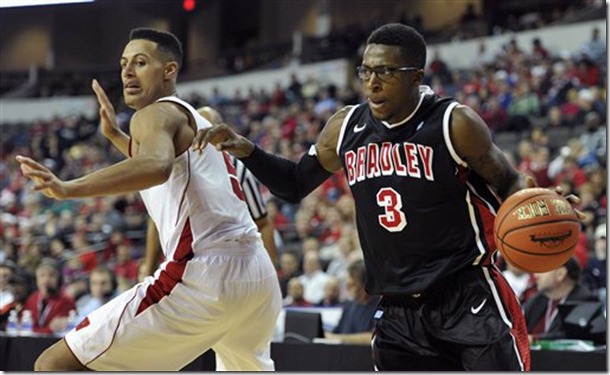 In its final game before the start of Big Ten play, Michigan will welcome the Bradley Braves to Crisler Arena. The Braves fired former head coach Jim Les after finishing last in the Missouri Valley Conference a season ago but haven’t shown many signs of instant improvement under new head man Geno Ford. Bradley is 5-6 on the season and lacks a win over a team ranked in Ken Pomeroy’s top 150.

John Beilein’s son, and former Michigan staffer, Patrick Beilein will be on the bench tonight but you won’t mistake the Bradley offense for Beilein-ball anytime soon. Simply put, the Braves have struggled to score the ball this season. They are among the worst three point shooting teams (306th) in the nation but, to their credit, they only hoist 23 percent of their shot attempts (331st) from behind the arc. While the two point shooting numbers, 50%, are in acceptable levels, it’s the lack of any offensive rebounding presence and inability to value the basketball that plague the Braves. Bradley turns it over on 23% (257th) of its possessions and rebounds just 30% (263rd) of its missed shots.

Defensively, Geno Ford’s squad falls more in the middle of the road. Pomeroy ranks the Braves 151st in adjusted defensive efficiency although they don’t appear to master many of the four factors individually. The one area where Bradley does excel is at the free throw line. Not only do the Braves rarely foul, opponents have inexplicably made under 60% of their freebies – well below the national average of 68%. Despite lacking many overwhelming strengths, the Bradley defensive profile is also void of many glaring weaknesses. In fact, Brave opponents shoot, rebound and turn the ball over at almost identical rates to the NCAA Division I average. Michigan’s offense has been effective this season and should be able to score the ball against Bradley in this one.

6-foot-6 senior Taylor Brown leads Bradley in points (14.7), averages over seven rebounds per game and appears to a prototypical volume shooting combo forward. His statistical profile resembles something of a better rebounding version of Deshaun Thomas without an outside shot. Brown si joined up front by Jordan Prosser, a 6-foot-9, 235 pound, red-shirt sophomore. Prosser averaged nine points and nine rebounds per game but is woefully inefficient offensively as he connects on just 44% of his twos and 57% of his free throws

Walt Lemon Jr. and Dyricus Simms-Edwards make up Geno Ford’s starting backcourt and are Bradley’s number two and three scoring options, both averaging a shade over 12 points per game. Both players have the tendency to turn the ball over a bit too much but also have the knack to pick up steals. Simms-Edwards is the better distributor and attempts more three point field goals (13/39, 33%) while Lemon is the better shooter (59% on twos, 47% on threes) and makes frequent trips to the foul line but uses fewer possessions.

Despite rarely playing its bench – Brave starters play 79.8% of available minutes – Bradley loves to push the basketball. The Braves average 70 possessions per game and while that’s not quite Oakland’s 74 per game, it’s still well above Michigan’s average of 65 possessions per game. While John Beilein’s team slows the game down as a rule of thumb, some of Michigan’s better offensive performances have been in uptempo games versus Oakland and Memphis.

This isn’t a great Bradley team but the Missouri Valley also isn’t the SWAC. Despite their struggles, Bradley still should pose a more stringent test than the likes of Alabama A&M or Arkansas Pine Bluff. However, the Braves have played just one game against a major conference school – a 23 point loss to Wisconsin – and Pomeroy gives Michigan a 92% chance of victory with a 75-59 final score.