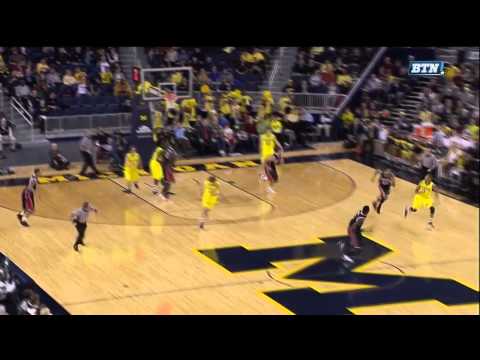 1. Trey Burke’s block and finish on the other end

With just under five minutes left in the first half on Thursday, Bradley was on a 7-0 run and had taken the lead for the first time since the games opening moments. Fans were starting to get a little nervous and Michigan looked sluggish as Bradley continued to make just enough plays to hang around. On this play, Trey Burke gave everyone a reason to relax for at least the time being – weathering the Bradley run. After blocking a 3-point attempt from Bradley’s Walt Lemon Jr, Burke took off and Matt Vogrich tossed him a nice pass in transition right around half court. From there, Burke’s speed took over. All he needed was two dribbles to get by Taylor Brown for the easy fast break bucket. The play was the start of a quick 6-0 Michigan run that appeared to give the Wolverines some breathing room as half time approached.

2. Shayok Shayok’s dunk and Taylor Brown’s three to end the half

As fast as the Wolverines re-gained control of the game late in the first half, they lost it. Bradley finished the half on a 7-2 run as the Michigan offense stalled. The first of two plays on this set is a monster dunk by Shayok Shayok. Shayok received the ball on the wing and was covered by Tim Hardaway Jr. He simply blew by Hardaway and Evan Smotrycz was late on the defensive rotation. When Smotrycz arrived, he found himself in trouble as Shayok delivered a monster – Sports Center Top 10 worthy – dunk right over Michigan’s leading scorer on the night. Shortly after, with time winding down in the half, Bradley delivered another improbable basket. Taylor Brown pulled up from well behind the 3-point line as the half time buzzer sounded and knocked down the triple. This tied the game at halftime and was a stern reminder that Michigan would have to come out strong in the second half to come away with the win.

There’s not too much to say here except point out that Evan Smotrycz has been on fire in Michigan’s last four games. Thursday’s win was more of the same as Smotrycz secured his second straight double double. Smotrycz was five for seven from behind the arc (now 15 of his last 19) and finished with 20 points to tie a career high. As seen in these clips, he has no fear to shoot the deep ball. When he has the time and space to set his feet it feels like the ball is going in every time.  Smotrycz continues to be a key to the Michigan offense. Whether he’s playing the four or the five, he is critical for stretching opposing defenses and spacing Michigan’s offense.

A sparse student-less crowd was expected for a pre-Christmas game against Bradley but Thursday’s crowd was surprisingly strong. It was perhaps the fullest that Crisler has been this season. For much of the game the crowd was sitting on its hands, waiting for something to happen in what had been a mostly mundane, frustrating affair. Tim Hardaway Jr.’s alley-oop was the moment that awoke the crowd – which was the loudest we’ve seen this season – and sparked a decisive Michigan run. With Michigan gaining momentum and up by seven, Hardaway Jr. streaked down the floor on a fast break with Stu Douglass, who received a great outlet pass from Jordan Morgan. As the one defender decided to attempt to stop Douglass with the ball, he simply threw up a perfect lob to Hardaway who was streaking alone down the paint. Hardaway slammed home the alley-oop and brought the crowd to its feet. From there, Michigan finally began to pull away.

5. Michigan’s four buckets following the dunk puts the game away

The momentum from Hardaway’s dunk didn’t stop there. Just 18 seconds later, Hardaway finished on the fast break again, although this time with a lay up off a pass from Zack Novak. In the next two minutes, layups by Novak, Burke and Smotrycz turned what was a seven-point game into a 15-point game with just over six minutes to play. The themes of this run were clear: sharing the basketball, forcing turnovers and getting easy looks around the hoop. Michigan made some great outlet passes off of defensive rebounds – check out Stu in the first clip – and all four baskets were easy, relatively uncontested, layups. The lead would prove to be too steep for Bradley to recover and Michigan now heads into Big Ten play with a very solid 10-2 record.