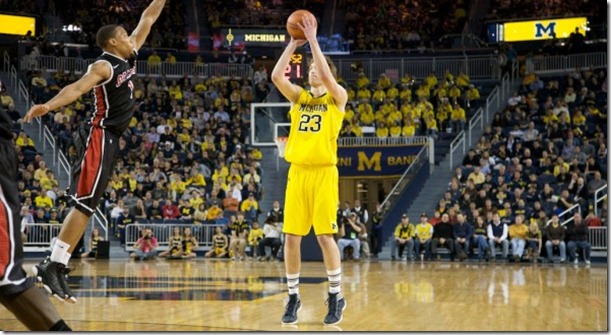 No students in the crowd, Christmas carols during pre-game warm-ups, travel plans arranged to return home and the allure of Big Ten play on the horizon. Holiday games are a recurring nightmare for college basketball coaches. It’s impossible to deny that Michigan was in at last a bit of a holiday funk to open this game. The Wolverines got off on the wrong foot and never really seemed comfortable, battling back and forth with Bradley, until a Tim Hardaway Jr. alley-oop catalyzed a Michigan run and stretched a five point lead to 15 midway through the second half. The end result was a 77-66 Michigan win, securing a 10-2 pre-conference record for Michigan heading into Big Ten play.

Michigan’s offense was humming along as it has more often than not of late. The Wolverines scored 1.14 points per possession, the best mark against Bradley this season. Michigan has scored the first or second most points per trip against six of its 11 Division I opponents this season. When the Wolverine offense is running smoothly it really is fun to watch. Michigan’s attack was balanced and precise as 25 of its 31 field goals (81%) were assisted on the night. Five Wolverines reached double figures and four players handed out at least four assists compared to just six turnovers as a team.

Geno Ford might have a losing record in his first season at Bradley but he still knows his basketball. In his post game remarks, Ford emphasized that rebounding was the difference between the first and second halves and he couldn’t have been more correct. Bradley rebounded 39% of its misses in the first half compared to just 7% in the second – that’s nine first half offensive rebounds to one second half offensive rebound. The half time message to attack the defensive glass was well received and the Braves finished with a mediocre 27% offensive rebounding rate for the game.

Michigan’s defense was relatively average in the other three factors. The Wolverines held Bradley right around their season averages shooting the basketball and managed to avoid sending them to the free throw line. However, as we’ve seen all too often this year, the Wolverines struggled to force a turnover prone Bradley team to give the ball away.

John Beilein noted that the Michigan staff hadn’t seen any 3-2 zone from Bradley on film and that Trey Burke had never faced a 3-2 zone in his career. Both of those points were obvious when Bradley first switched to the zone the first half. Michigan’s offense stagnated, scoring two points in the final 3:45 of the first half, and U-M players were content to settle for mediocre three point attempts. Similar to the defensive end of the floor, John Beilein’s halftime adjustments worked. Michigan made 5 of 16 (31%) two point field goal attempts in the first half compared to 16 of 21 (76%) in the second. Michigan attacked the zone in the half court and combined that production with easy baskets in transition.

Michigan’s pre-conference slate was relatively unremarkable. The Wolverines took care of business, winning the games they should, but left opportunities on the table versus Duke and Virginia. Next up is a quick three day holiday break with morning practice on the 23rd followed by an evening practice on the 26th. Then it’s the Big Ten opener as Michigan hosts Penn State on December 28th.