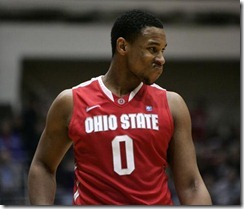 This was supposed to be a down year for the Big Ten. Many of the stars from the 2010-11 Big Ten campaign moved on and the season was setting up to be an Ohio State versus everyone else affair. The Buckeyes are still the class of the league but the middle group of teams that featured more preseason question marks than sure things has clearly surpassed expectations throughout non-conference play.

Big Ten play tips off tonight and things begin to get interesting. Here’s a team-by-team look at the league to date including major question marks and storylines that could affect the conference this season.

Ohio State: The Buckeyes are the league’s best when Jared Sullinger is healthy. He missed a pair of games, including a loss at Kansas, with a back injury and has also been limited with a foot injury. For now, Sullinger is a go and Deshaun Thomas and William Buford are all-conference caliber scorers. It’s nearly impossible to pick against Ohio State. But if Sullinger goes down for any extended period of time seeds of doubt, especially with a Buckeye frontcourt that lacks depth, will begin to grow.

Wisconsin: Jordan Taylor has been slightly less efficient than a year ago, inevitable regression toward the mean, but the Badgers haven’t been much worse for the wear. Ben Brust has been a big time scorer in the backcourt while Ryan Evans, Mike Brusewitz and Jared Berggren have been solid down low. The Badgers boast Ken Pomeroy’s No. 1 adjusted defensive rating and their offense doesn’t lag far behind.

Indiana: Indiana enters Big Ten play touting one of the league’s best non-conference victories, knocking off Kentucky at Assembly Hall. The rest of the the Hoosier slate isn’t quite as impressive. 12-0 is 12-0 and wins over North Carolina State, Notre Dame and Butler are decent, but the Hoosiers have eight wins against teams outside the RPI top 200. The Hoosiers appear to have corrected their chronic fouling woes, tout the likely freshman of the year in Cody Zeller and have seen improved individual play across the entire roster. Now it’s time to see if that improvement translates to Big Ten play, where Tom Crean has won just eight games in three seasons.

Michigan: Picked by many as the league’s third best team before the season, Michigan has been relatively unspectacular throughout non-conference play. No bad losses but no great wins, the Wolverines have seemed to coast along and are tough to read as conference play begins. Can the Wolverines defend as well as we saw down the stretch a season ago? Does Tim Hardaway Jr. regain his torrid shooting form from conference play last season? Do Trey Burke and Evan Smotrycz keep up their impressive play as the level of competition increases? Questions remain about this Michigan team and they won’t be answered until Beilein’s squad picks up some quality wins.

Michigan State: Last year everything seemed to go wrong for the Spartans. This year’s Michigan State team might not be the most talented or experienced on paper, but it’s clear that they are tougher than last year’s. They defend better, rebounding numbers have improved and after opening the season with losses to Duke and North Carolina, the Spartans have cruised through non-conference play including nice wins over Florida State and Gonzaga. Draymond Green is among the conference’s best and most complete players and he’ll be the key. His shooting has been erratic but when he’s hitting his shots the Spartans are almost impossible to beat.

Illinois: John Gasaway, tempo free extraordinaire and Illinois-alum, called the Illini the most overrated team in the country last week in the midst of a four point win over Cornell. Losers of two of their last three, to UNLV and Missouri, Illinois finds itself in a similar situation entering Big Ten play as we saw last season. Meyers Leonard has emerged as an inside presence, anchoring a great interior defense, but the Illini just haven’t been able to score the ball as effectively as other Big Ten teams. Illinois’ offense ranks third to last in Ken Pomeroy’s adjusted efficiency ratings and will be a concern until Illinois proves it can score the ball in league play.

Purdue: Robbie Hummel has stayed healthy following ACL surgery last season and Purdue still defends like you would expect from a Matt Painter coached squad. The Boilermakers’ Achilles’ heel is in the low post where they’ve failed to get any sort of consistent production from Travis Carroll, Jacob Lawson or Sandi Marcuis. Losses to Alabama, Xavier and Butler aren’t terrible but Painter’s squad has some proving to do in conference play.

Northwestern: Northwestern is still Northwestern with a perimeter oriented, efficient, Princeton style of offense featuring heavy doses of John Shurna combined with an underwhelming defense. The biggest question mark for the Wildcats this season was whether freshman Dave Sobolewski was ready to lead the team and he’s done a solid job of that. The Wildcats whiffed on their two best chances for non-conference signature wins – vs. Baylor and at Creighton – but did knock off a group of middling major conference schools in LSU, Seton Hall and Georgia Tech. This Northwestern team hasn’t done anything to distinguish itself from Wildcat teams of the past which simply couldn’t defend well enough to make the NCAA Tournament.

Minnesota: When Trevor Mbakwe went down with an ACL injury in Orlando, neutral observers were ready to throw in the towel on the 2011-12 Gophers. Since then, the Gophers have gone 6-0 including a home win over Virginia Tech. The competition has been far from spectacular but the Gophers have taken care of business. Tubby Smith’s cure for the Mbakwe-less Gophers has been a bit of everyone, Minnesota’s bench plays in 45% of available minutes (5th nationally) and no active Gopher averages over 10 points per game. The recipe will be in for its first real test as Minnesota opens Big Ten play with road games at Illinois and Michigan.

Nebraska: Nebraska will play its first Big Ten game ever against Wisconsin tonight and its statistical profile doesn’t lend much reason for confidence. LSU transfer Bo Spencer has been a solid answer at the point guard position but the Huskers are  haven’t knocked off a team in the Ken Pom top 100 this season.

Iowa: The Hawkeyes were supposed to take a step forward in Fran McCaffery’s second season but appear to have done anything but. Some players have improved individually, and freshman Aaron White has impressed, but Iowa is 8-5 with a home loss to Campbell on its resume and appears destined for the Big Ten basement.

Penn State: It was no secret that Pat Chambers was in for a rebuilding season and things have gone as expected. Penn State’s offense, centered around Tim Frazier, is the worst in the league and its average defense isn’t enough to save it.