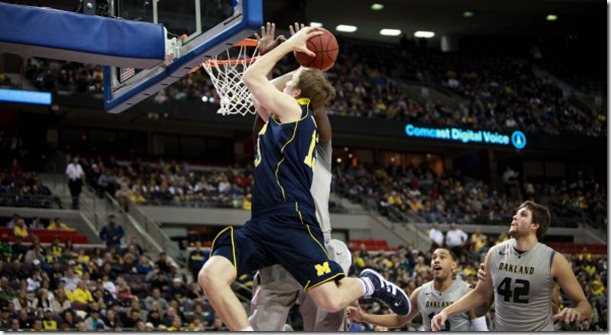 As Michigan prepares to begin conference play, here are player-by-player observations and grades based on Michigan’s first 12 games.

Tim Hardaway Jr.
Grade: B+
This grading scale is far from scientific and accounts for the weight of expectations. Hardaway is Michigan’s leading scorer and has been more efficient than a year ago while using a larger portion of Michigan possessions. He’s creating more opportunities for others and has improved his two point shooting percentage by 10% while attempting more twos than a year ago. Why the B+? He’s still attempting almost six threes per game and is connecting at just a 33% clip. He’s disappeared for long stretches of games but the three point shot is what will allow him to be a game changer in Big Ten games.

Evan Smotrycz
Grade: A
Smotrycz is not only shooting the laces off the ball – 57% on twos, 58% on threes for a 70% eFG% (5th nationally, 2nd Big Ten) – he’s also Michigan’s best defensive rebounder (3rd best in the Big Ten). His recent form will be nearly impossible to carry over into Big Ten play but it’s clear that he’s the most significantly improved player on the Michigan roster. 5.3 fouls per 40 minutes is the statistic that has plagued Smotrycz this season and his ability to avoid picking up cheap fouls in Big Ten games will be critical to Michigan’s success.

Trey Burke:
Grade: A
Expectations were high for Trey Burke because he’s the only point guard on the Michigan roster. Whether he was ready or not, he was stepping onto center stage. Burke leads Michigan in minutes and is the most efficient Big Ten freshman to use at least 24% of his teams possessions. He might not hand out assists as often as Darius Morris but he can still hit twos (51%) and has the three point shot as a legitimate weapon in his arsenal (36%).

Zack Novak
Grade: B+
Novak appears to have succeeded in developing from a three point shooter to a three point shooter deluxe. He’s taking more twos and making most of them – 64% – but hasn’t lost his three point stroke either, connecting on 42% of his triples. His assist numbers are almost double a season ago but he needs to continue take more shots and become more involved in the Michigan offense.

Jordan Morgan
Grade: B
Morgan’s numbers are down slightly across the board and he certainly doesn’t have the same chemistry with Burke that he had with his former roommate, Darius Morris. That being said, Morgan is still making the most of his opportunities and has converted on an astounding 71% of his two point attempts. Michigan will have to continue to find Morgan more opportunities but Morgan has to hold up his end of the bargain with consistent, foul free, play.

Stu Douglass
Grade: B-
Douglass has been far from the three point sniper Michigan fans want to see – 15/50, 30% on threes this season – but he’s also been more efficient than he was a year ago. His two point shooting is improved and he’s done a solid job filling a number of different roles for Michigan – sixth man, shooter, leader, point guard cameo and perimeter defender to name a few. Michigan needs Douglass to hit threes in Big Ten games but more importantly take smart shots.

Jon Horford
Grade: B
Horford has shown flashes. He rebounds outside his area as well as any Michigan player, he’s the best Wolverine shot blocker and and put together a pair of nice games in Maui against Memphis (6 pts, 6 reb) and UCLA (12 pts, 5-5 fg, 7 reb). However, outside of those two games he’s 2 of 10 from the field and he’s missed the last three games with a foot injury. Michigan needs him to provide quality minutes backing up Jordan Morgan but the first concern is that he’s healthy and ready to go.

Matt Vogrich
Grade: C+
Vogrich is bigger and stronger than a year ago but he lost his three point stroke in the process. Vogrich is just 4 of 21 (19%) from three point range and that’s production that Michigan needs from Tim Hardaway Jr.’s backup. Of course statistics are a fine line at this juncture in the season, if Vogrich had made four more threes this season he’d be at last year’s average of 38%.

Blake McLimans
Grade: C+
McLimans is certainly better than he was a year ago, even knocking down a pair of threes already this season, but he needs to avoid turnovers, make twos and do a better job on the defensive glass.

Eso Akunne
Grade: B
When you are the 8th or 9th man on the bench, all that can be asked for is to be ready to play when your name is called. Akunne has answered the bell this year making seven of eight field goals on the year including four threes. He might be lacking the long term potential of Brundidge but he appears to be a viable option in a desperate situation.

Carlton Brundidge
Grade: C+/Incomplete
Brundidge was more highly regarded by many scouting services than Trey Burke but he was the sort of player that was always going to have an adjustment to the college game. Brundidge’s attacking style and power guard mentality was always going to take some fine tuning at the college level and we’re seeing that first hand. Brundidge has earned more opportunities lately and could continue to see more as the season progresses.

Colton Christian
Grade: C/Incomplete
Christian has played sparingly but played an important role against Memphis and at Virginia. Against Memphis he provided an unlikely spark off the bench while he struggled at Virginia, botching several plays which led to a Virginia run. With Smotrycz’s strong play and Novak’s ability to back up the four position, it’s tough to find a scenario where Christian has a major impact.