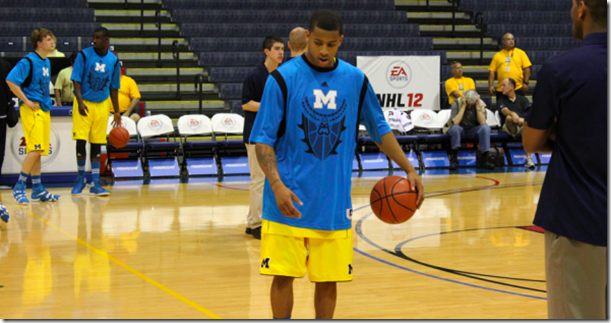 Before this season began, many speculated the situation was set up to be a disappointment similar to 2010. Michigan was ranked in the top 20, traveling to a prominent preseason tournament and relying on a freshman point guard to lead the team. While there has certainly been an adjustment period for this team, it’s fair to say that a 10-2 record is nothing to be ashamed of. It’s also not worthy of proclaiming any early victories. Here is a look at some major storylines facing the 2011-12 Wolverines as they enter Big Ten play.

Dean Oliver identified the “Four Factors of Success” to be shooting (eFG%), turnovers (TO Rate), rebounding (Off. Reb. Rate) and free throws (FTA/FGA) with one caveat: all four factors do not have equal weighting. Oliver proposed a 40 percent weight for shooting, 25 percent for turnovers, 20 percent for rebounding and 15 percent for free throws.

Michigan rates from average to well below average in the three peripheral factors. The Wolverines rank 91st in turnover rate, 240th in offensive rebounding percentage and 308th in free throw rate. The Michigan recipe for success this season has been very simple: great shooting. The Wolverines are the nation’s fourth best shooting team, with a 58.2% effective field goal percentage – 59.2% on twos (1st) and 38% on threes (55th). While Michigan’s shooting will almost certainly regress in conference play, it’s also clear that this team can shoot the ball at a high level.

Despite boasting the nation’s best two point shooting percentage, Michigan attempts 44 percent of its field goals from three point range. That speaks to the quality of two point attempts that Michigan is discovering, a product of the great spacing and movement that John Beilein’s offense is designed around.

Michigan ranks 98th in Ken Pomeroy’s adjusted efficiency entering Big Ten play, that’s 9th best in the Big Ten and only tops Northwestern, Iowa and Penn State. Last year’s Michigan squad impressed defensively against subpar competition before finding a rude awakening in Big Ten play. The Wolverines were able to revive their season thanks to a sudden turnaround on the defensive end.

It’s only fair to wonder whether this Michigan team is prepared to defend at the level necessary for Big Ten success. The Wolverines open Big Ten play at home against the league’s worst offense, Penn State, but early focus should be on the defensive end of the floor. If teams like Penn State and Minnesota, that usually struggle offensively, score the ball efficiently and shoot the ball well, that should be a red flag as Michigan heads toward more difficult games.

Michigan’s bench plays just 23.5% of available minutes this season and while that’s slightly more than a year ago, depth concerns are real for this Michigan team.

The Wolverines don’t have a true back up for Trey Burke, as Stu Douglass is much better equipped to play off the ball. Tim Hardaway Jr.’s primary back-up, Matt Vogrich, has struggled to find his three point shot. Jon Horford is nursing a foot injury, out for at least another week with a stress fracture, which leaves Michigan searching for answers in the front court. 6-foot-4 Zack Novak has battled against bigger and stronger players throughout his career and that appears likely to continue as Smotrycz slides to the five position.

While Michigan can probably survive with the current situation, one or two more injuries could be crippling. Carlton Brundidge might have the most potential to step up off the bench but hasn’t shown much. Horford, Douglass and Vogrich developing into viable options in the six, seven and eight slots in the Michigan rotation seems to be a more likely outcome than another unproven option emerging.

A Hot Start is Critical

Five of Michigan’s first seven Big Ten games are at home with road games at Indiana and Iowa. A slow start could set the Wolverines against the eight ball as they will play eight of their final 12 games on the road, including a trip down to Arkansas. Gaining ground by stealing a couple road wins is feasible, having to make up ground on the road is a predicament that Michigan needs to avoid at all costs.

Early games against Penn State, Minnesota, Northwestern and at Iowa are games that Michigan should win. However, a road trip to Bloomington and home dates with Wisconsin and Michigan State mean that we will know a lot more about this squad by January 17th.

No Quality Wins, But No Bad Losses

With both Wolverine losses coming on the road or at neutral sites and against top 25 foes, it’s fair to say that Michigan hasn’t suffered a bad loss this season. Of course the caveat is that the Wolverines are badly lacking non-conference quality wins. All of Michigan’s wins to date have come against teams outside of the RPI top 50 – two top 100, four top 200, three 200+ and one non-D1. Of course Memphis (6-5) could and should play its way into the top 50 during Conference USA play – RPIForecast.com projects Memphis around 41st – and Iowa State could emerge with a strong Big 12 performance. Even if Michigan’s non-conference slate is relatively average to date, the Wolverines will play just four more games against teams currently outside of the RPI top 100 compared to 15 games against RPI top 100 foes.

Michigan plays Nebraska (road), Iowa (road), Wisconsin (home) and Minnesota (home) just once this Big Ten season. Nebraska and Iowa are likely to fall in the bottom third of the league, teams you would rather play twice, but playing those games on the road while avoiding a trip to the Kohl Center still gives Michigan a more navigable road slate. Michigan has actually won its last three games at The Barn in Minneapolis so it’s tough to see that road game fall off the schedule.

Nine Wins and In

Michigan has team goals beyond just making the NCAA Tournament as a bubble team but the cloudy nature of the conference has created an interesting scenario. Nine Big Ten teams have positioned themselves to stake a legitimate claim at an NCAA Tournament berth with above average conference results. Don’t just listen to me, trust SI.com’s Bubble expert Andy Glockner, “With nine of the league’s 12 teams in the RPI top 100 and no true weak sisters at the bottom, any BIG teams that finish at .500 or better will look pretty compelling come March.”

12 games into the year we have a much better sense of what this team is about but my read is still cloudy. I think this team can compete in the upper third of the Big Ten but every game will be a battle. If you hold a gun to my head for a Big Ten win prediction I’d go with 11. Don’t hold me to it come March but that’s where I’m at right now.