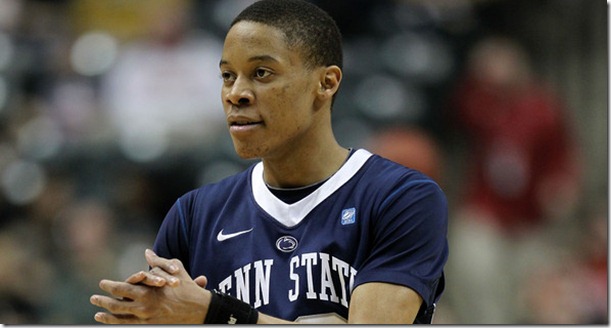 Michigan and Penn State are the last schools to open Big Ten play as they face off in a Thursday night affair in Crisler Arena. It’s the first of two early conference home games for Michigan and an opportunity for the Wolverines to jump out to a quick start in Big ten play. Things haven’t been easy during Pat Chambers’s first year at Happy Valley – the Nittany Lions are just 8-5 – but Penn State enters the game on the heels of two of their stronger performances of the season and features one of the Big Ten’s best guards that no one is talking about, Tim Frazier.

Penn State’s offense has struggled this season after losing the majority of its scoring prowess from a season ago including Talor Battle. The Nittany Lions are the worst shooting team in the Big Ten – 45% on twos, 32% on threes for a 46% effective field goal percentage – and also rank last among Big Ten teams in Ken Pomeroy’s adjusted offensive efficiency. Penn State turns the ball over on a fifth of its possessions and seldom gets to the free throw line where it connects on just 64% of its attempts. The one area where Chambers’ squad has excelled is on the offensive glass. The Nittany Lions grab 38% of their missed shots which is third best in the Big Ten and rank 39th nationally. Michigan’s defense has been up and down this year but stopping Penn State appears to be as simple as controlling the defensive glass.

Penn State has fared a bit better defensively thanks to an aggressive style of play. The Nittany Lions force a lot of turnovers (24% turnover rate) and do a great job on the defensive glass (74% defensive rebounding rate). Both of those areas are traditionally a Michigan strength (turnovers) or an area without much focus (offensive rebounding). While Penn State defends two point shots well (44%) and has above average block and steal numbers, it struggles to defend threes (35%) and has the tendency to foul a bit too often. Only four teams have broken the 1-point per possession plateau against Penn State but that might speak more to the caliber of competition than quality of defense.

On an individual level, it all starts and ends with Penn State point guard Tim Frazier. The 6-foot-1, 170 pound, guard leads the Nittany Lions in almost every statistical category, including points, rebounds, assists, minutes and steals and boasts the nation’s second best assist rate – assisting nearly 50 percent of Penn State’s made field goals. Frazier has lost his perimeter stroke, missing his last 14 three point attempts over the last five games, despite starting the season making nine of his first 19 attempts from three point range.

No other Penn State player averages double figures or plays more than 26 minutes per game. Jermaine Marshall is the next most prevalent shot taker and is a capable three point shooter (34%) but connects on just 40% of his twos. Billy Oliver is the only other Nittany Lion to start every game this season and he attempts almost 75% of his field goals from three point range where he hits at 33%. Freshman guard Trey Lewis scored 33 points including eight threes against Trey Burke in the Ohio state semifinals last spring and is Penn State’s best three point threat at 39%. Cammeron Woodyard is the only senior on the Penn State roster and most efficient offensive player. Sasa Borovnjak and Ross Travis are a pair of options in the post that are more interior oriented than Oliver and both are solid rebounders and make around 57% of their twos in limited attempts.

That’s a long list of contributors but none that will really jump off the page as significant threats while Pat Chambers continues to search for answers. The defensive priority has to be limiting Frazier first and foremost. Frazier is averaging 10.8 points per game and is shooting just 25%, without making a single three, in Penn State losses compared to 21 points, 51% shooting and 47% three point shooting in Penn State wins. Stop Frazier and the Nittany Lions aren’t left with much else.

Expect a lot of threes in this game. Michigan’s reliance on the three point shot has been well documented, the Wolverines have attempted 44% of their field goals from three point range, but Penn State attempts 41% of their shots from long range. On top of that, Penn State opponents are attempting 47% of their shots from three point range – the second most in the country. The fact that Penn State opponents attempt so many threes but still connect at a relatively high rate (35%) should bode well for Michigan’s offense although three point defense has been a slight concern for the Maize and Blue at times this season.

Ken Pomeroy projects a 67-56 Michigan win with just a 15% chance of an upset while Vegas likes Michigan by 12 points. Defending home court is critical in any Big Ten season and losing to a team projected in the basement of your league is not the way John Beilein’s team would like to open conference play.