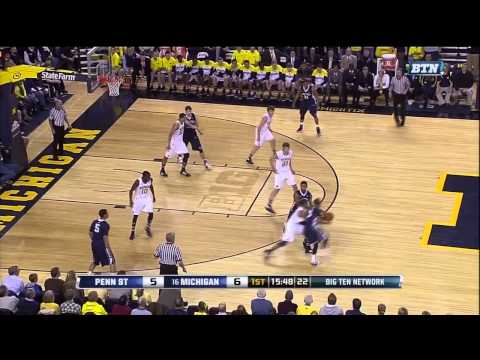 Despite a sold out crowd, Crisler Arena felt a bit lifeless early on. Students are still on break and Michigan didn’t have a lot of energy out of the gate as Penn State jumped out to a small early lead. These back to back steals by Burke helped calm some nerves and get Michigan into the flow of the game. Both are great active defensive plays even if the finishes at the other end were a bit dicey. Burke gets bailed out with a goal tend on the first and on the second it looks like he probably traveled. Evan Smotrycz actually leads Michigan in steals but with Burke’s hands and quickness he could and should pick up more steals as the year continues.

Novak continues to diversify his offensive game as the season wears on. Michigan closed the half with a great run and Novak seemed to be centrally involved in every big play. First you can see him scoring with his back to the basket, a wrinkle that we haven’t seen much of this year, and then you can see him affecting the game in transition and around the paint. I think it’s safe to say that the Zack Novak we saw over the last three years would have made maybe one of these plays per game, certainly not four to close out a half.

Hardaway opens the second half attacking the basket

Hardaway began the transition to attacking the basket in the first half but he opened the second stanza with a purpose. Michigan went to Tim for the first three offensive possessions of the second half and they ran down the court with two more points each time. Everything aggressive and toward the basket, Hardaway fed off the energy and even took a charge on the defensive end. It didn’t matter who Penn State threw at him – Oliver, Frazier and Woodyard all give it a shot in this clip – Hardway simply blew past them.

It’s no secret that Matt Vogrich has struggled with his shot during non-conference play. Perhaps the slightly symbolic transition into Big Ten play, or the short time off for the holidays, was exactly what Vogrich needed to snap out of his funk. Matt hit both of his threes on the night and shot them both with confidence – and close to NBA range.

Smotrycz’s improvement is the storyline of the season. His shooting is improved, he’s rebounding, making hustle plays and in this game he added the backdoor pass to his offensive repertoire. His decision making can still be suspect at times – three turnovers against Penn State – but these are just things of beauty.

Sorry for the slightly abridged version of Five Key Plays today. I’m traveling and Kevin is in New Orleans for the Sugar Bowl.