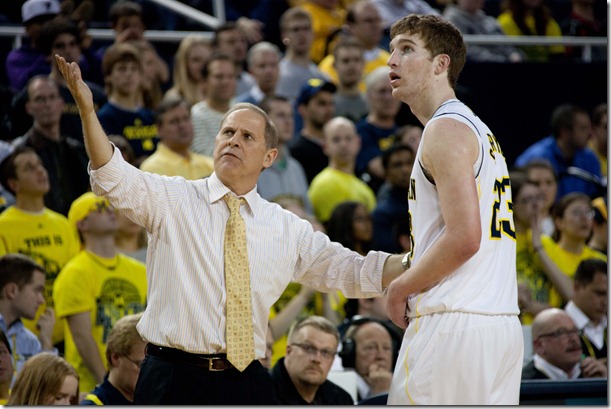 Post Game: John Beilein Press Conference / Hardaway, Burke, Smotrycz & Novak Video / Photo Gallery
The message from the Michigan basketball players and coaches after a season opening home win over Penn State was clear: good Big Ten teams defend their home court. Zack Novak emphasized that point before the game and John Beilein expressed relief after the game, admitting that he wasn’t sure how his team would react to Big Ten play. The Nittany Lions are far from the best the Big Ten has to offer but Michigan put together a convincing win comprised of relatively ordinary individual performances. Despite an average performance, Michigan dominated the game in all facets and cruised to an easy 71-53 victory.

Michigan’s NCAA-leading two point shooting took another step forward as the Wolverines were lethal inside the arc yet again Michigan made 17 of 28 (61%) two point attempts but connected on just 32% of its three point looks. The final tally for the Wolverine offense was 1.18 points per possession, a mark that the Wolverines reached in just four Big Ten games last season. The second most encouraging aspect of the Michigan offense was its ability to value the basketball against an aggressive Penn State defense. Michigan turned the ball over on just 13% of its possessions, well below what Penn State has forced this season and Michigan’s second lowest turnover rate of the season.

The Michigan defense, which has been a slight question mark lately, shut down a middling Penn State offense. The Nittany Lions scored just .88 points per possession and that number was buoyed by some cheap baskets late once the game was out of hand. Penn State’s offensive rebounding attack was quelled as Michigan grabbed 69% of the Nittany Lions’ missed shots. Tim Frazier was neutralized, requiring 18 shots to score 20 points and tallying five turnovers, and his supporting cast wasn’t much help. Almost every Penn State stat is a Michigan win: 45% two point shooting, 27% three point shooting, 13 turnovers on 60 possessions, 12 free throw attempts to 53 field goal attempts. This was a performance to build on for Michigan’s defense.

Routine games are a coach’s best friend and this was certainly the start that John Beilein hoped for to open Big Ten play. Michigan has to make the most of the soft start to its Big Ten schedule and this was an encouraging early performance. Next up is another home game with Minnesota traveling to Crisler for a New Year’s Day battle. Michigan continues to build and improve, brick by brick, but there’s a certain sense of uneasiness and anticipation that continues to hang over the season as Michigan searches for that marquee win to legitimatize its status.

In related recruiting news, Mitch McGary was at the game and Dustin managed to snap a photo.