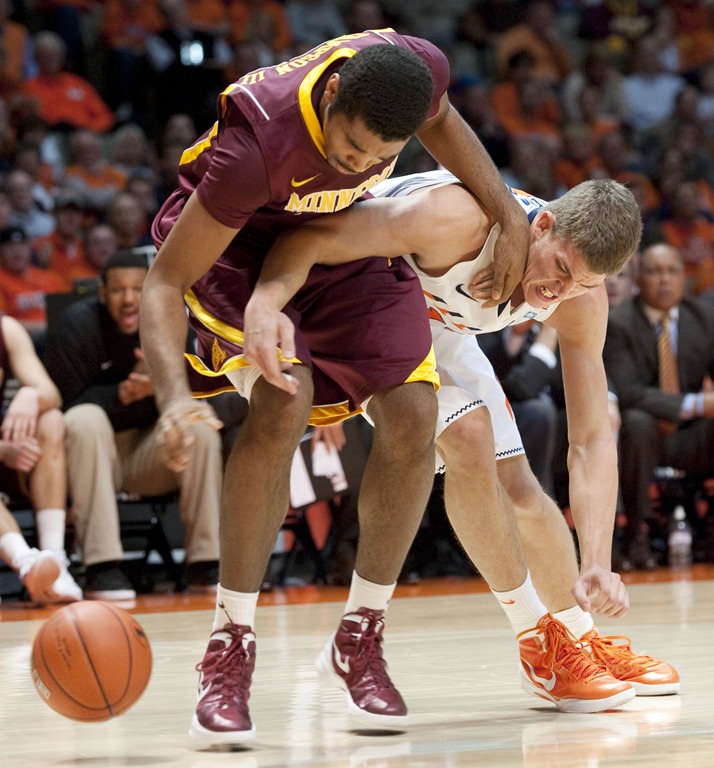 Logic and reason tells us that Minnesota is supposed to crumble. The Gophers lost Trevor Mbakwe to knee surgery during the Old Spice Classic and were written off. It was almost a foregone conclusion that the Gophers’ season would fall apart in a similar fashion to last year when the they lost 10 of their final 11 games while dealing with backcourt injuries. This Minnesota team has already proven its more resilient than last year’s, winning six of seven games without Mbakwe with the one loss coming in double overtime at Illinois on Tuesday.

Minnesota travels to Ann Arbor needing a win to right the conference season before it falls anymore off kilter. The styles of these two programs couldn’t be more different. Minnesota rarely attempts threes, turns the ball over frequently, gets to the free throw line and has a defense predicated on shot blocking. Michigan spreads the floor, shoots from distance, rarely gets to the line and plays a more passive and containing style of defense. John Beilein’s recipe for success has had the upper hand in recent seasons. Michigan has won five of the last six games versus Minnesota including three wins at Williams Arena in Minneapolis.

Given the size and athleticism of Minnesota’s roster, it’s a bit surprising that the Gopher offense has been more effective than the defense. Minnesota’s attack is focused on attacking the basket, evidenced by its strong numbers in two point shooting (53%), offensive rebounding (38% off. rebounding rate) and free throw rate (44% FTA/FGA). The Gophers attempt just 25% of their field goals from three point range and a whopping 64% of their makes are assisted. Similar to last year’s team, turnovers are the Achilles’ heel of this Minnesota offense. Turning the ball over on 22% of their possessions as a team, the majority of Gopher ball handlers have higher turnover rates than assist rates. Don’t be surprised to see healthy variations of defense from Michigan to keep Minnesota out of a grove, I’d expect multiple possessions in the 1-3-1 and 2-3 zones as well as Michigan’s tradition man-to-man look.

Minnesota’s defensive profile is a bit of a mixed bag. High steal and block rates – both are tops in the Big Ten – emphasize the individual defensive talent level that Minnesota has to work with. Rodney Williams is a gifted athlete, shot blocker and pick pocket while Ralph Sampson has blocked plenty of shots in the last four years. However, Minnesota’s defense has seen two major undoings this year: three point shooting and defensive rebounding. The Gophers are just average on the defensive glass, rebounding 68% of opponents’ misses, and have been dreadful against the three ball. Gopher opponents are shooting almost 37% from three point range and that ranks third to last in the conference. Michigan is unlikely to make Minnesota pay on the defensive glass but the U-M three point attack could certainly open up the Gopher defense.

Julian Welch and Rodney Williams are two of the primary players to have elevated their games since Mbakwe’s injury. Welch has increased his scoring average by three points per game, scoring in double figures in all but one of the last ten games. The 6-foot-3 guard can shoot the ball (51% twos, 44% threes) and get to the line (48% FTA/FGA) but has struggled to harness turnover problems this season. Williams’s talent and athleticism has never been in question but a move to the four position has seemed to spark his confidence. He’s been strong with the ball, making 65% of his twos, while blocking shots, grabbing steals and getting to the line regularly.

Minnesota plays its bench as much as anyone, with 45% of available minutes being distributed among non-starters. Big man Ralph Sampson III is a well known commodity around the Big Ten despite showing little improvement from year to year. Freshman guard Andre Hollins gets to the line regularly and has shown three point shooting ability. Point guard Maverick Ahanmisi still struggles with turnovers but has shown improvement. Austin Hollins is known more for his defensive prowess but provides a solid but unspectacular offensive game.

Ken Pomeroy likes Michigan by four with a 65% chance of victory, predicting a final score of 67-64. The level of competition will be a level above what Michigan faced on Thursday against Penn State but this is still a game that Michigan should win by executing its game plan.