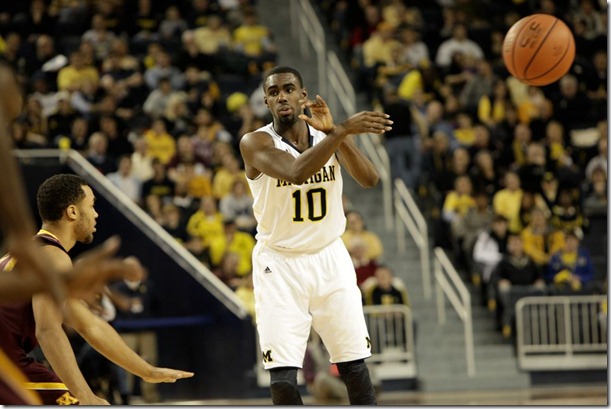 Under 60 possessions, woeful first half offense, lots of whistles and plenty of subpar shooting nights. Despite Michigan leading for most of the game, the Wolverines were never able to put Minnesota away. Minnesota hit just enough big shots to hang around in the game and had two chances to tie or take the lead in the final two minutes of action. Michigan held onto its lead, and perfect Big Ten record, and escaped with a 61-56 victory.

This was not your average John Beilein victory. The four factors graph is atypical of Beilein’s traditional recipe for success. Michigan was outshot by Minnesota in this one but the Wolverine offense managed to score 1.05 points per trip thanks to frequent trips to the free throw line and a strong performance on the offensive glass. Minnesota isn’t a great defensive rebounding team but it’s a rare and impressive occurrence when Michigan grabs over 40 percent of its missed shots. Morgan really battled for a few, grabbing six, but five other players also grabbed at least one offensive rebound.

One point per possession is a good barometer in conference play. If you can hold your opponent below one point per possession, you probably will have a good shot to win the game down the stretch. Minnesota scratched and clawed its way to .97 points per trip in this one and that was just enough. The Gopher offense was powered by some out of character three point shooting – 8 of 19 – but Michigan’s ability to stop the Gophers’ strengths on offense was impressive. Minnesota’s offense is one of the best in the conference at grabbing offensive rebounds and getting to the free throw line. Michigan held the Gophers to a 25% offensive rebounding rate, well below their 38% average, and a free throw rate of just 15%, compared to a 44% season average. Despite Minnesota’s offense having a big second half – the Gophers made 7 of 9 twos and 6 of 13 threes in the second half – Michigan’s defense grinded out two key stops to close the game.

This was a game that Michigan couldn’t afford to let slip away. Home games are vitally important in league play and the downside of the soft scheduling start for the Wolverines is that early losses would be more costly. It wasn’t the prettiest game but every Big Ten game is a fight and Michigan has taken care of business thus far. Next up is a trip to Bloomington, Indiana to face the Indiana Hoosiers.