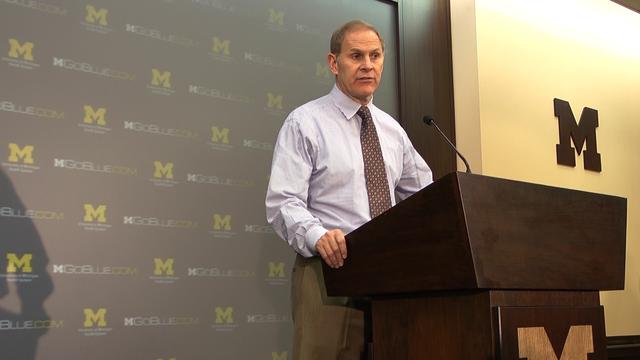 John Beilein noted that Michigan’s win over Minnesota reminded him of the Wolverines’ run down the stretch last season because the game came down to a handful of critical possessions in the closing minutes. Watch Beilein’s full press conference in the embedded media player below or find the complete transcript after the jump.


“This started to feel like Big Ten basketball again. It reminded me of last year’s season where in the last 10 games, most of them were decided with a big shot or a stop late in the game. If you look at our first half stats it tells a little bit of why we couldn’t get away from them. We shoot 50% from the foul line, shoot 28% from three, maybe 28% from the floor, we should have probably been up by ten at half and perhaps had an easier time of winning than we did. But credit Minnesota for all of that, they forced us into some tough shots, we pressed a little bit, had some careless turnovers and then the foul shooting which has not bothered us at all, got us a four point lead. I love the way Minnesota is playing right now, they are very selective with their three point shots. They did some post entries throw over the top to three point shooters, very difficult to defend and we haven’t practiced that one time.”

On what Minnesota did well defensively: “We want to run every time but we came down and had two turnovers right away. There’s no sense in running if you play defense for 30 seconds and then go give it back to them. They had a really good man-to-man team. They played our forwards tough, Evan and Tim they just locked into and didn’t give them a lot of room to move. Trey responded when they weren’t giving strong side help, you can’t find the shooters, so it’s up to your point guard and your big man.”

On responding to an early deficit compared to last season: “6-1 isn’t a big thing to be down. I’m not going to call a timeout if we’re down 6-1 unless we’re really loafing. It’s tough to compare now because you have so many different personalities. I like both teams were able to deal with adversity pretty well.”

On Burke: “We keep a lot of stats and found that 11 of our points in the first half were right in the middle of the floor. So we tried to keep it there and do some things off the middle of the floor with Trey. I didn’t tell him anything. Everyone on our team is looking for what is their best shot and he took some great ones, took the ball to the basket and finished very well. His explosion, especially off of ball screens, I don’t think there’s anyone that can catch him.”

On what surprises him with Burke: “His poise is really good. In practice, sometimes he gets flustered or disappointed with himself. It’s very brief and he moves on. He plays on after mistakes by either himself or his teammates – which is really refreshing. He’s one of the rare guys, usually as a freshman that’s an acquired trait.”

On Burke scoring more than distributing: “I don’t think there’s ever a time hwen I’d say I don’t want my point guard to be a scorer. The fact is that sometimes guys that are not great shooters, their high school coach might make them into a point guard. When we didn’t shoot very well from three, he had two threes, got to the basket and then the pull-up 15 footer over guys like Sampson.”

On Hardaway’s late shot: “We definitely want him to do that. I wasn’t going to put him back in the game if he was going to play not to miss. We mentioned that in the timeout and said ‘Tim you’re back in that game right now, don’t be afraid, you are open, shoot it in.’ They went zone on us on that possession and Trey had to quickly adjust, we called a different set, we ran it perfectly and they sort of guarded it but he used a ball screen and shot it in. To answer your question, it says a lot about Tim Hardaway.”

On Smotrycz playing fewer minutes: “I think both of those guys (Hardaway and Smotrycz) looked kind of tired out there. Now the scouting reports are out there. I just loved, he had eight rebounds in the first half, he was doing some great things. When we went with our smaller lineup, which is a pretty good lineup, they were small so there was some match up things right there. We practiced for one week and maybe coach practiced ‘em too hard, they have tomorrow off to recover.

On whether he considered fouling on the last possession: “Absolutely not. No. We’re not a good enough rebounding team to foul there, sometimes guys foul and still get a shot off. I’ve just never believed a lot in it and we’re just going to play defense and try to get a stop.”

On Horford’s progress: “He hasn’t done anything again. We’ll have an update with medical determination later this week. There hasn’t been another MRI.”

On using the ball screen: “It’s much different. We’re running it more than we’ve ever done it. It has a lot to do with having a primary point guard that can handle the ball so well but Stu had a good one today, Zack has been able to use it. We use a lot ball screens and that’s what we pride ourselves on, as the game evolves our teams evolve.