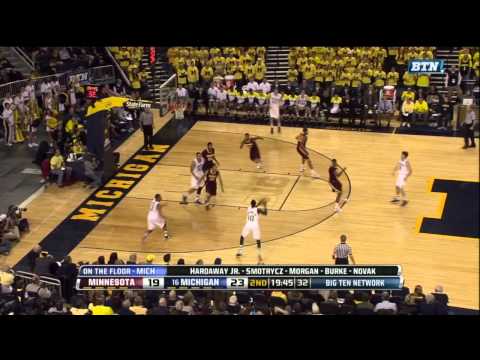 Burke was a dominant offensive force in this game and carried the team as other Michigan players struggled. Burke scored 27 points on just 11 shot attempts and while he scored nine points from the free throw line he was also efficient from the field. Burke thrived off the pick and roll but also knocked down a pair of three point jumpers. This clip does a great job of demonstrating the many ways that Burke can be an effective scoring option off the screen and roll. He can take the ball all the way to the rack, finishing through contact, but he’s also routinely efficient knocking down the 15-foot pull up jump shot over bigger defenders. It’s a different screen and roll look than Michigan ran with Morris, who was more effective using his size to find the rolling man, but it’s equally difficult to defend. The performance was good enough for Burke to not only be named Big Ten freshman of the week but also earn co-Big Ten player of the week honors.

Michigan seemed to play tougher than Minnesota in this game and nothing was more emblematic of that observation than this possession. Minnesota had cut the Wolverine lead to just one point and, as they did all day, the Wolverines responded. Michigan had a rare five point possession thanks to two offensive rebounds and a loose ball foul on Rodney Williams. There’s plenty of praise to go around in this sequence. Smotrycz helps tip the first miss out, draws the foul on Williams during Douglass’s three and secures the second missed shot for before making a smart pass to a cutting Novak. Douglass realizes that his defender lost track of him and knocks down the three with confidence from deep. Zack Novak might make the most heads up play by realizing that Williams started drifting down the floor and cutting straight to the bucket.

Minnesota averages four made threes per game but knocked down eight in this slow paced 58 possession game. The Gophers ran a lot of sets where they would screen away from the ball to free up a shooter drifting to the wing who would usually receive a kick out pass from the post. All three of these triples involve Zack Novak getting picked off and freeing up enough space for a jump shot. In the first half, Smotrycz got caught on several of these screens as well. John Beilein mentioned that Michigan hadn’t seen or even practiced against these looks and noted that they are difficult to defend. Michigan likes to help down around the post with their guards, which perhaps makes it even more vulnerable in this sort of set.

It’s no secret that Tim Hardaway Jr. struggled in this one, playing what might have been his worst game of the season, but this is just a big time shot. Michigan is up by a point after securing a huge defensive stop on the other end and Minnesota tries to put Michigan off balance by going with the 3-2 zone. The Wolverines react, John Beilein praised Burke for quickly changing the play, and Hardaway makes the shot. The first option was Hardaway shooting a three, using Morgan’s screen to free himself in the corner, but Hardaway comes back to his right to re-use Morgan’s screen and seal and buries the jumper over Rodney Williams. Hardaway was 1 of 13 before this shot but you have to love that he had confidence to take the shot and knocked it down.

Michigan’s defense struggled at times in the second half. The Gophers were getting open looks and knocking them down, forcing the Wolverines to match their production on the opposite end and keep the game within a couple possessions. These are the sort of defensive possessions that win games in the Big Ten and Michigan battled throughout the entire shot clock on both plays. Morgan plays great defense on both possessions. On the first he bodies up Sampson, preventing him from getting strong position, and on the second he helps on the screen and roll while forcing Welch to the perfect position on the baseline before grabbing Williams missed three off the rim.