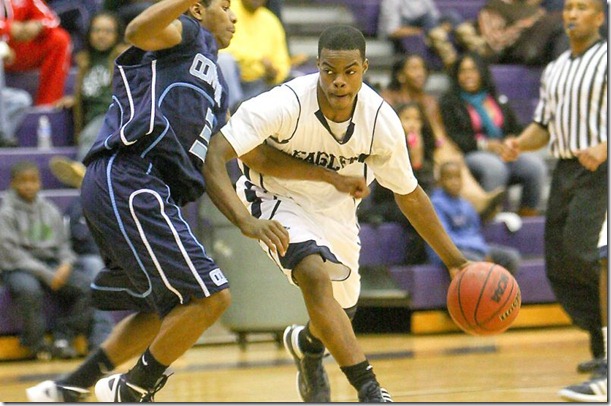 It’s been a busy couple of weeks for Michigan recruiting targets and commitments. Many have been participating in Holiday tournaments and all Michigan commitments took unofficial visits to Ann Arbor over the last two weeks. Mitch McGary, Glenn Robinson III, Nik Stauskas, Mark Donnal, Derrick Walton, Austin Hatch and Zak Irvin all visited for at least one of Michigan’s holiday games.

Continue after the jump for a roundup of stats, scores, scouting and videos from various action over the last two weeks including one commitment receiving kudos from all three national scouting services.

We already posted video of Stauskas at the HighschoolOT.com Holiday Invitational but here’s a rundown of some of the praise the combo guard earned on the internet – including porops from all three major national scouting services. Stauskas had 12 points, six rebounds and five assists in a Thursday game and 28 points, including five triples, in the final game of the event.

Rivals.com’s Eric Bossi was impressed with the Canadian’s performance:

Southborough (Mass.) St. Mark’s senior Nick Stauskas is the perfect replacement for the scrappy Novak. Like Novak, Stauskas plays with a huge chip on his shoulder and is willing to scrap it up a bit with opponents. Stauskas is also an excellent shooter with deep range, a flashy passer and a guy who takes the floor with a significant amount of confidence.

Currently ranked No. 79 nationally in the class of 2012, the four-star wing is part of an excellent Michigan recruiting class and he should be able to contribute right away.

Like Brandon, Stauskas is another guy who will be getting a lot of love after this tourney. The big wing shot the lights out of the ball and surprised a number of cats with his ability to finish above the rim. He solidified himself as a guy who should be in the chatter for the top 75 seniors in the country with his play in Raleigh, capped off when he dropped 28 on future Kansas Jayhawk Andrew White. Much love to Michigan for getting on this Canadian sleeper early in the game, as they would have had to work a whole lot harder had they waited to start recruiting him.

Scout.com was also impressed with Evan Daniels noting that Stauskas “fits John Bielein’s system perfectly” ($). Dave Telep is also a believer: “Michigan has a nice player in Nik Stauskas. He does enough off the ball to distinguish himself, not merely as a shooter but as a scorer.

McGary’s Brewster Academy team was off over the holidays but will be back in action on Friday versus New Hampton. McGary enjoyed time back at home while making it up to Ann arbor for Michigan’s game versus Penn State.

Lake Central reeled off three straight victories over the holidays. Knocking off Munster, 53-49, Portage, 85-42, and LaPorte, 60-45. Lake Central is now 8-1 with its lone loss to Hamilton Southeastern.

Our own Joe Eberhardt was in attendance for the win over Portage and we posted a full scouting report, video footage and an interview from that easy Lake Central win.

Robinson had just 13 points against Munster, including missing four front ends of one-and-ones, but this was his first career win over Munster, who defeated Lake Central in the sectionals last season. (Photo: NWI Times)

“That’s been in the back of my mind since last year,” Robinson said. “It’s crazy. We did what we had to do. I know I’ll be in the gym (this morning) shooting free throws. I’ll get it back. But we do not win the game if not for those offensive rebounds.”

Robinson had 26 points on 9-of-16 shooting in the 15 point win over LaPorte and surpassed the 1,000 point plateau for his career.

UMHoops was in attendance to watch Walton face off against Southfield and you can find the requisite scouting information and video footage here. Walton had 21 points and five assists in that win.

It was a big week for Zak Irvin as he was named the MVP of the City Securities Hall Of Fame Championship. Irvin struggled in an opening win against Pendleton Heights, scoring just 12 points, but bounced back in the Championship game. He tallied 26 points and ninerebounds in the championship game, a revenge win over North Central.

Anthony Wayne was off over the weekend.

Sean Sellers: Led Greensburg to a win over Indian Creek and recently updated his recruitment here. Sellers added 26 points and 12 rebounds in a win over Hauser High School and also took a recent unofficial visit to Butler

Peyton Allen: Allen scored 28 points against Belleville Althoff and had 17 against Lincoln.

Trevon Bluiett: Bluiett had 27 points in a 73-42 win over Tri-West on December 27th and added 20 points and nine rebounds in a four point win over Lapel on the 29th.

Perry Poindexter: Poindexter had 11 points and six rebounds in a win over Kokomo.

Jamal Poplar: Poplar had a team high seven points in a loss to Dexter.