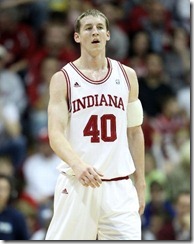 Inside the Hall is one of the best college basketball blogs on the internet and they’ve been friends of ours for a long time. They’ve already posted a podcast previewing Thursday’s game and a tempo free Indiana focused look at Michigan. Alex Bozich also agreed to answer a couple questions about Indiana’s surprising 13-1 start while discussing how the Hoosiers match up with Michigan.

Indiana has already won one more game than a year ago and has knocked off Kentucky and Ohio State at home. When you look down the roster you can’t help but notice a majority of the players from last year’s three win Big Ten team are still instrumental pieces. If you had to put your finger on just one thing, what’s the difference between this year’s team and previous teams?

Cody Zeller. It’s the easy answer, but it’s also reality. Indiana had no post scoring presence last season and now they’ve got one of the country’s best. He’s opened up the game for the players around him and you can see this group’s confidence growing as the wins accumulate. If I had to cite a few improvements on the returning players, three that stand out are: Improved ball movement, better defensive positioning which has helped cut down on fouls and noticeable offseason gains in strength and conditioning.

Indiana’s fouling struggles on the defensive end last season have been well documented, how have the Hoosiers alleviated those concerns?

The Hoosiers are still fouling at a fairly high clip. But they’ve swapped a couple of high volume foul guys in Tom Pritchard (now a reserve) and Bobby Capobianco (transferred to Valparaiso) for Zeller, who has not only played better defensively, but has also avoided foul trouble for the most part. Tom Crean placed a pretty heavy emphasis on shoring these well-documented problems up in the offseason and while the numbers still aren’t great, they’re a noticeable improvement.

For the Michigan fan that hasn’t seen Cody Zeller play, describe his game. How do you stop him?

Zeller isn’t a player that demands the ball in the post and that’s something he’s probably going to need to do more as he becomes more comfortable at this level. The Hoosiers have struggled at times to find him inside, but when they do, Zeller usually either breaks his man down for a good look or finds an open teammate out of the double team. His presence on the block has really opened things up for his teammates on the perimeter. One of his strongest attributes is his ability to run the floor. He’s been good for a transition basket in just about every game. Michigan State did the best job of stopping him last week by rotating the combination of Derrick Nix and Adriean Payne on him and playing physical. I’m not sure that’s going to be the recipe, but it’s really the only thing that’s worked thus.

Indiana is making almost 45% of its threes but attempting just 27% of its field goals from long range. Do the Hoosiers need to shoot more threes or are they making so many because they are only taking good shots?

The Hoosiers have one of the most efficient offenses in the country through 14 games, so it’s hard to suggest they need to start hoisting more perimeter shots. If anything, they still need to do a better job of playing through Zeller on more possessions and if the result of that is double teams and more open looks from 3, then so be it.

If you were game planning against Indiana what would be your first two keys to victory?

Indiana hasn’t done a great job on the defensive glass, so crashing the boards is an area that could be a vulnerability. The other key would be a concerted effort to guard the 3. It sounds easy, but it’s not when you have so many options that can connect from outside. Christian Watford (22-of-44), Jordan Hulls (31-of-57) and Matt Roth (12-of-24) are all shooting better than 50 percent. Watford especially is dangerous because he’s improved so much around the basket and there aren’t many 6-foot-9 guys with a 7-foot plus wingspan that step out like he does.

What’s the latest on Will Sheehey’s status?

The latest is he’s day-to-day. At least that’s the official word from Indiana. The extent of his injury or the exact nature of the injury still isn’t really known. It’s his left foot and he was wearing a boot as of last Saturday. It’s possible an update could emerge between now and tipoff on Thursday, but it’s likely and wait-and-see scenario.

Michigan hasn’t played particularly well in Bloomington in recent seasons and the Hoosiers are 10-0 at home, so I’ll go IU by six. I think the Wolverines keep it close thanks to Burke and Hardaway Jr., but ultimately Watford and Zeller end up being the difference.