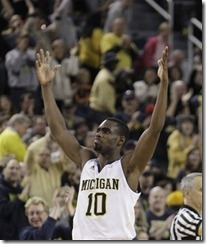 If you’ve listened to sports radio, watched ESPN or read any of your favorite national college basketball writers lately then you must have heard. Indiana is back. Tom Crean’s first three seasons in Bloomington were painful but, 14 games into the 2011-12 campaign, it’s apparent that Indiana has begun to figure things out. The Hoosiers have knocked off arguably the nation’s top two teams, Ohio State and Kentucky, within the friendly confines of Assembly Hall and have cruised to a 13-1 record after winning just 12 games a season ago. Now it’s Michigan’s chance to travel to Assembly Hall in a match-up that will pit a pair of teams itching to prove that they belong in the Big Ten’s top tier.

The Hoosier offense is about as good as any that Michigan will face this season. John Beilein called Indiana the “best three-point shooting team in the country” and that’s barely hyperbole. Only three Division I teams, all mid-majors, connect on more of their three point attempts. The Hoosiers only attempt 27% of their field goals from long range, settling for only the best looks, but make 52% of their twos as well. The turnover woes that plagued Tom Crean’s early teams are all but eliminated but the attacking style of offense lives on, evidenced by a Big Ten best 47% free throw rate (FTA/FGA). The Hoosier offense has been held under 1-point per possession on only one occasion (at Michigan State) and has had at least the fourth best offensive performance allowed against all but one of its opponents this season.

The most drastic statistical difference between this Indiana team and last year’s is that the Hoosiers don’t foul at such a radical rate. There were few teams in the country that fouled as often as Indiana last year but Indiana has improved from inexplicably bad to relatively average at allowing free throws this season. There is one early red flag, no doubt emphasized by playing two of the league’s most physical teams (Ohio State and Michigan State), Indiana ranks 12th in Big Ten games with a free throw rate allowed of 47% in conference games. Despite not fouling, Indiana has been able to turn opponents over on a shade over a quarter of their possessions and has done a good job defending twos (44%) and threes (31%). Defensive rebounding has been a slight weakness but not to the extent that an average offensive rebounding team like Michigan should take advantage.

It’s tough to guess what to expect from this team. The Wolverines have done just about everything you’d expect, seeming to meet but never exceed expectations. If you are going by the book you would pencil this one in as a loss. Michigan lost its last two games at Assembly Hall and needed overtime to knock off an Indiana team that won just one Big Ten game the year before that. Vegas likes Indiana by eight and Pomeroy is even more bullish on the Hoosiers, projecting a 76-64 IU win and giving Michigan just a 14% chance at the upset.

While that’s the logical side of the equation, there’s also a side that says Michigan is every bit capable of playing with and beating Indiana if it plays a good, maybe great, game. To pull off the upset there are three keys for Michigan. First off, win the free throw battle. Michigan isn’t going to get to the free throw line much but it has to prevent Indiana from living at the stripe. Indiana racked up a free throw rate over 40% in each of Michigan’s last two losses at Assembly Hall.

Next, Michigan needs to have an advantage from the three point line. Michigan will need to hit some threes but defending Indiana from long range might be even more important. Finally, Michigan needs a big game from Tim Hardaway Jr. The sophomore wing averaged 18 points per game in Michigan’s five road wins last season compared to just 10.6 per game during Michigan’s road losses. Hardaway needs to find his three point stroke (4 for his last 26) and take over the game in a fashion that we’ve seen sparingly since last season.

This is easily one of Michigan’s most difficult challenges to date and it will be interesting to see how a team that’s rarely been tested since losing at Virginia reacts to a raucous Assembly Hall environment.